A pyrrhic victory can be described as one that inflicts such a devastating toll on the victor that it is tantamount to defeat. Such a victory negates any true sense of achievement and damages long-term progress. The original Pyrrhic victory came courtesy of Pyrrhus of Epirus, a Greek king who invaded Italy in 280 BC. He entered his first battle at Heraclea with a force of some 25,000 men and 20 war elephants and immediately scored a famous victory. The following year, he defeated the Romans during a heated clash at Asculum. Despite being victorious, he had also lost more than 7,500 of his most elite fighters, including many officers, and had no way of replacing the casualties. His failure to deal the enemy a death blow sent morale plummeting within his ranks. According to the ancient historian Plutarch, the warrior king was quoted as muttering, “If we are victorious in one more battle with the Romans, we shall be utterly ruined.”

Thank you, what we need now, my opinion, constructive ideas from people across the broad spectrum of the church on how we can best make the changes needed. Obviously a grassroots issue, yes, no?

Going by the proceedings during the 2022 GC Session, it is apparent that there’s an excessive focus on protecting the Adventist brand rather than exploring new opportunities.

Perhaps, at the end of each quarter, the 1,333 administrators should pan out into the highways and byways of adventism - not as speakers in shiny suits, but listeners - instead of continually washing only each other’s feet.

Two questions, if we’re still intent on “finishing the work”, what exactly is that work; and another -why?

Third question - Does the Adventist church, more than any other, reflect the character and legacy of Christ?

Just one comment - loving the church more than the Gospel is idolatry.

Reports from the session indicated that out of the approximately 2,680 delegates, about 20 percent were women, and less than 3 percent were young people below 30. Clearly, this depicts a representation crisis worsened by the fact that only 693 delegates were drawn from the laity while the rest were church employees (652) and administrators (1,333). For a church that upholds equality and inclusion, the under-representation of women and young people and crowding out of laity by denominational workers raise questions about the future of Adventism.

The problem of representation at the GC Session finds its origins in local churches where the male-dominated church boards that nominate delegates continue to be biased toward senior male members.

Undoubtedly this is an issue, even if we had leadership that was interested a future where the church has relevance instead of preserving beliefs of the past at all cost.

But, has it ever been different? It seems old men have always been in charge, and the only old men that flourish in the church are those that piously tow the party line. Most anyone calling for change is almost automatically censored and excluded.

Given the church’s insistent denial of science in favor of claiming historicity of the tribal origin stores of the Jewish bible - which most modern Jews correctly understand to be legend and allegory - the church has already lost all relevance for me. I just cannot tolerate an organization that is so ignorant - so ignorant they are meta-ignorant. It’s almost comical to watch a bunch of pastors and church employees make assertions in the realms of science they basically know nothing about. Worse, it appears they’re making these claims based on a sophomoric and out-dated misreading of those scriptures - which they should know something about.

…On one side were those who felt like victors the perceivedthose onslaught of liberalism, while on the other side were the losers who felt marginalized or ostracized.

There seems to be a typo here - as well as some missing words or punctuation, as this sentence doesn’t seem parsable. Maybe is should say “…victors that perceived the onslaught of liberalism,…”?? It’s in the original post as well.

The GC needs to be reminded of its role as a coordinating body rather than being the “Holy See” of Adventism.

I suspect that one can no more “remind” the GC of this than any of the reformers were able to “remind” The Holy See that it isn’t The Holy See.

I get the joke, but actually I think The Holy See is what it claims to be, as described here: The Holy See

There seems to be a typo here - as well as some missing words or punctuation, as this sentence doesn’t seem parsable. Maybe is should say “…victors that perceived the onslaught of liberalism,…”?? It’s in the original post as well.

i read this as: “On one side were those who felt like victors against the perceived onslaught of liberalism…”

The phrase “finishing the work” is one that ought to be excised from SDA vocabulary. The idea that somehow the SDA church controls the timing of cosmic events such as the end of the earth is hubris at its highest.

Exactly. So the SDA members will determine when Jesus returns and the entire cosmos gets purged. Well, this is just SDA 'lingo" (jargon) that doesn’t need a specific definition - the definition is wide enough and assumed, as to be able to be argued whatever way one wants.

Years ago, Spectrum had an issue that included all the SDA expressions with SDA definitions - like “fall on the rock, finish the work, investigative judgment, veggie links, spirit of prophesy, voice of prophesy, edges of the Sabbath, etc.” Unpacking all these can get interesting.

The problem of representation at the GC Session finds its origins in local churches where the male-dominated church boards that nominate delegates continue to be biased toward senior male members.

To my knowledge, local church boards are not consulted regarding delegate representation to the GC session. I may be wrong. 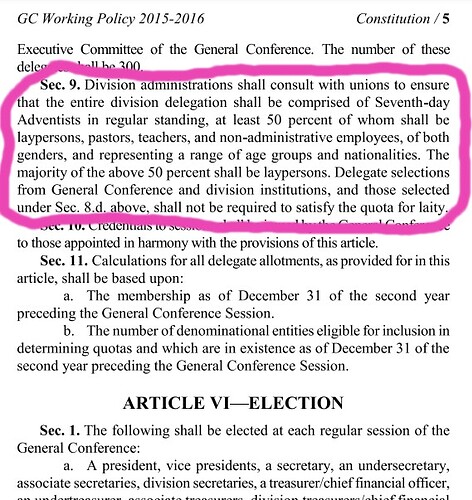 Supposedly, Jesus last word were “It is finished!”

So there’s no way to be sure who’s busy work Christianity has been trying to wrap up for the past two millennia….

Whatever the “work” is, it sure needs a lot of money. They never seem to have enough of it.

Like the old time drag racers used to say about horsepower:

If more is better, there’s no such thing as too much!

What a spectacular essay, describing the painful reality of a religious identity crisis!

The Adventist Church has been hijacked by a clan of hyenas telling church members, “Just obey and you will be OK!” Nothing but another “pyrrhic statement.”

I am no longer a victim of this system, so I am just commenting based on what I see from the outside. And it’s ugly!

Yes, I agree in a sense, but then the linked page does say, “In the Roman Catholic Church, only the see of the pope bears the right to be addressed symbolically as “holy”.”

They also have “holy” communion and “holy” baptism, and “holy” matrimony.

Thank you for pointing out the error. The sentence is supposed to read: “On one side were those who felt like victors against the perceived onslaught of liberalism…” The article has been updated with the correct language.

The recent volume by Dr. Gil Valentine MUST be read by Elder Wilson and his leadership team: emphasized textOstriches and Canaries.emphasized text It elucidates in great detail why the reactionary conservative approach is neither theologically nor administratively helpful. Burying and ignoring the truth about Ellen White is unfair to her and almost mortally wounding to our fellowship. The same is true for Scriptural fundamentalism. As long as our leadership community insists on going “back” instead of forward, demands allegiance to authorities no longer deemed “infallible,” and insists that its administrative authority is irreproachable, we will run from the Spirit that "leads us into truth, the one that will “set us free.”

I would challenge leadership in prayer and spiritual seriousness, to convene a truly open “conference” on these matters. Make the materials available to the attendees and then the membership who wishes to have it. It may take years of trust and conversation to stitch a new seam between the elements of Adventism that have torn apart for the past fifty years. This may be dismissed as wistful, but we need to begin somewhere.

It is high time to “re-run” two things from our past given the new information and tools available. The 1919 conference should be held again with transparency, streamed live, recorded and made available to all. The same issues exist but there is more “light” available on the EGW writings.
The second re-run is the Veltman “Life of Christ” project. Last time it was done manually, on a small section of “Desire of Ages”. With the technology available this could be done digitally, without “reader bias”, over a much larger (perhaps the entire body of work) selection.
These two re-runs will help to settle much of the gaps regarding the position of EGW in the church.
The GC, the EGW Library owes it to the church to update these past events.

Rehashing the past is a waste of time. It is said, “You can never go home again.” and I can testify to that. Time changes everything - especially us. The issues may be the same, but we live in a different time and have different backgrounds.

Jesus promised us - each of us - the guidance of the Spirit. Either we believe that and go forward; or we keep hanging on to the past. We still have the Bible and a lot of sincere and intelligent people with whom we can communicate and help each other grow in every way that counts.