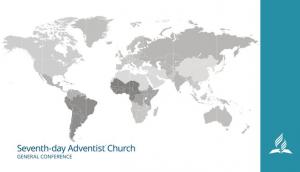 General Conference President Ted Wilson, along with a select few have, without authorization from any governing committee of the church, and absent of any authority aside from themselves, taken it upon themselves to declare the very first Seventh-day Adventist Creedal Statement in the history of our denomination, titled “An Invitation to Uplift Jesus: A Statement from the General Conference Executive Leadership and Division Presidents.” While premised as a pastoral communication, it departs boldly into new territory for a Church that up until Wednesday morning, April 11, affirmed, “Seventh-day Adventists accept the Bible as their only creed” (Fundamental Beliefs preamble).

This “statement” offers seven points that those who are to be deemed acceptable must publicly affirm and pledge. This replaces the baptismal vows, and the 28 Fundamental Beliefs. Now there are seven. If left unchallenged, this further turns Adventism towards creedalism and authoritarianism. This is especially true since it appears that this “statement” was issued during the closing hours of the Spring Meeting of the General Conference Executive Committee, yet it appears this primary decision-making body was not even consulted about it.

The historical antipathy in Adventism to creeds is well documented in studies such as “Creeds and Statements of Belief in Early Adventist Thought,” by S. Joseph Kidder. We have known as Seventh-day Adventists that creedal statements have been used to coerce conscience, limit ongoing understanding of Scripture, and centralize power in the hands of clerics. From our earliest days as a movement, we have consistently opposed the development of creeds, especially as a mechanism of enforcement, since many early Adventists themselves experienced persecution and disfellowshipping from their previous churches charged with non-compliance with creeds.

Note in particular this observation by Michael W. Campbell writing in the Journal of the Adventist Theological Society:

These fears were aptly expressed during the earliest organizational developments in 1861 of the Seventh-day Adventist Church. According to denominational co-founder, James White: “making a creed is setting the stakes, and barring up the way to all future advancement….The Bible is our creed.” Another Adventist minister, J. N. Loughborough, reiterated their collective fear: “[T]he first step of apostasy is to getup a creed, telling us what we shall believe. The second is to make that creed a test of fellowship. The third is to try members by that creed. The fourth to denounce as heretics those who do not believe that creed. And, fifth, to commence persecution against such.” —Michael W. Campbell, “Seventh-day Adventism, Doctrinal Statements, and Unity,” (JATS, 27/1-2 (2016): 98-99).

The issuance of this statement without review or even the apparent knowledge of the General Conference Executive Committee in session is deeply troubling. If left unchallenged, this provides the precedent for elected leaders—absent of appropriate governance oversight— to create a form of authoritarian leadership which could be replicated at any level of the church. One can only imagine the chaos created in local congregations when these seven questions are instituted as a litmus test for pastors, teachers, and lay leaders.

The suggestive nature of these seven questions—quite similar to every inquisitive investigation in the history of Christendom—are designed for a single purpose: to divide and purge those who cannot express their Adventist faith in the precise manner as the small group who drafted the questions. This is in complete opposition to a time-honored Adventist process by which beliefs and policies were developed in consultation that led to consensus and a unified perspective.

The Church has always emphasized the ongoing need for dialogue within its walls as well as with the outside culture. The preamble given on the General Conference website includes the words, “As the church continues to grow in size and influence, its role in society will require increased transparency. Such will continue be the demands of society, and such will be the need to define Adventism's relevance, or present truth, to those who are asking questions and seeking answers to their dilemmas and problems.”

The “Statement from the General Conference Executive Leadership and Division Presidents,” drafted in secret and issued without committee approval, is the very antithesis of this purpose.

This is a companion discussion topic for the original entry at http://spectrummagazine.org/node/8699
2 Likes
rohantocharles (Rohan Charlton) April 14, 2018, 10:36am #2

Before Trump we had Wilson…

To those who will suggest that the above article would have had better standing if the author had been willing to state his/her name, I agree. Yet, I acknowledge that among some who attempt to serve the Church, there is great fear and stress. This is not how God would want it to be.

I congratulate the Author on his/her decision to remain anonymous and give thanks for the contribution. The concerns he/she has shared are ones I invite all to similarly share.

This authors concerns are spot on. I couldn’t agree more.

Without due process this is only a wish list. Why can’t it just be ignored?

Ted will continue on his power grab as long as he has the office. At what point does the membership step-in and stop this man? Is there a clause in the constitution that allows him to be removed?

Re: Before Trump we had Wilson…
SUMMARY: ALARMING DEVELOPMENT WITHIN THE SEVENTH-DAY ADVENTIST CHURCH / PRESIDING WITHOUT AUTHORITY / MISUSE OF SO-CALLED PRESIDENTIAL POWER / ABSENCE OF APPROPRIATE GOVERNANCE!

So what is new, one could have foreseen the true nature of the man when he removed the salt shakers fron the tables at the GC. It is obvious he spent too much time in Russia. But let us be honest post Glacier View foretold today. The church is now Davenport, selling what it doesn’t have. .

I can understand why the author of the response presented above wanted to stay anonymous, but in proceeding with anonymity there will be no progress. Maybe he/she thinks that there is still hope for achieving something in the oncoming EC sessions, otherwise it’s only a blow in the dark, I’m afraid no more efficient than this writing of mine - an anonymous in the SDA Church.
The people who have some respect in the church should start to act. They should have done it yesterday, but if they didn’t, let them do it now. Let them connect themselves and we as members will support them. It is time to step out from anonymity.
The things dealing with illegal statements signed by no one, proclaimed in the name of no one should be ignored or denounced. Ignoring is not a good idea, because some could understand it as a recognition. That’s why I think that it is time to act and speak aloud and with name.

Loved the statement. Wish it would have been done earlier. Sorry if it offended Anonymous that people who claim to be Adventist ought actually to believe what the church teaches.

To so many people, the
Lord is in danger of
being no more than a
patron saint of our
systematic theology
instead of the Christ
Who is our life"

And more to the point here

And every day,
the world will drag you
by the hand, yelling,
"This is important!
And this is important!
You need to worry about this
And this! And this!"
And each day, it’s up to you
to yank your hand back,
put it on your heart and say,
“No. This is what’s important”

If only what the church “teaches” was so clearly understood (or maybe I should say “accepted”) by Ted Wilson and cronies. They seek to change that which has been historically Adventist by further instituting Headship heresy, adding to the increasingly long FBs, and now…creedal statements.

Ted’s presidency has been a lesson into the politics of a Banana Republic dictator.

This is not a gainsay of your post, just a tangent.

Most in Christianity don’t even know what the gospel, grace, and salvation really mean. Same for the will of God or what worship means

Try to conduct a poll/survey and U will see that 90% of SDA churchgoers have never even read the whole bible once. See what % have even read Steps to Christ once…never mind the much larger Desire of Ages or Great Controversy.

Fanaticism prevails and it is getting worse each week.

Too many religious cliches and unexplained bible verses in the churches

JWW, I’m wondering this too. Do we have impeachment measures in place? What would that look like?

Have you considered, Cliff, that the problems with this statement are not so much with its content as with the method by which it was prepared and disseminated?

I see it as authoritarian - top-down power at work! And that is known to be the least effective kind of leadership. Where I believe TW has failed is in developing sufficiently broad “ownership” for this document - in its preparation and its acceptance. (Read W. Edward Demings landmark work on effective leadership.)

We Adventists were taught to not be mere reflectors of other men’s thoughts, [pronouncements, “statements”]!

Clifford,
The 7 statements on taken on their face are not wrong or incorrect. They are good and right. The problem comes in when this is disseminated right on the heels of the Spring Council, seemingly giving it the authority of the Spring Council, when in fact, it may be just one or two or three people at the top. The other issue at stake here is that they appear to be targeting one group of people. Unfortunately not giving any factual details, only spreading fear and rumors.
This is no way to lead.

I appreciate the article by Anonymous. It gives voice and background to my gut reactions at reading this pronouncement from the GC, put forward without due process. I’m saddened that the denomination functions in a manner that requires the author of this article to withhold his or her identity. What happened to the free and open discussion of issues that marked our progress as a movement?

For me, the statement from the GC is but another bit of evidence that, as an organization, it is increasingly irrelevant to my Christian experience.

Salvation is not man made. We gather together to seek the Lord’s blessing not man’s approval. The invitation is to come ye, not sign up.

If the Document’s clusters of questions are deserving of an answer, is my question to Ted Wilson, Mark Finley, Clinton Wahlen, and Doug Batchelor also deserving of an answer? My question to them is simple and straightforward: Do you accept orthodox Seventh-day Adventist understanding of the biblical doctrine of the Trinity or do you believe that the Son is eternally subordinate to the Father in the functional sense? I hope you can use your influence and persuade Wilson, Finley, Wahlen, and Batchelor to answer my question.