During the afternoon business session on the 2015 General Conference Session's opening day, session chair Benjamin Schoun announced the 252 members of the nominating committee who will name a president and the church's other top leaders. When the names were presented, the list appeared on only two screens in the cavernous Alamodome, displayed in a font small enough to make the names illegible from many places in the dome. Further, the list scrolled up the screen slightly slower than film credits, but fast enough to make reading them next to impossible.

Members of the media complained about not being given copies of the delegate list or being able to see the screens from the press box. Delegates seated on the main floor of the arena came to the mic complaining of not being able to read the names either. One delegate asked that the font be enlarged (it was). Another delegate asked that the list of names be read aloud (they weren't).

Megen de Bruin-Molé, a young delegate from the Netherlands, asked that the composition of the delegates be given by age and gender. After some hesitation, those numbers were read to the delegates, dispelling any idea that the Seventh-day Adventist Church's representative government represents the Adventist Church. The following three graphics show why Adventist governance doesn't represent the people.

The first image provides demographic information for the Adventist Church at large. Note numbers related to women and to church members under the age of 40 in particular. these graphics show we have a problem, no question…but i think a yes vote on wo, which i expect, will correct at least the gender imbalance in these graphics over time…

The over 70 year olds are under represented.

The representation of women in the nominating committee is pretty close to the representation of women among the delegates. The overall distribution (both in terms of age and in terms of gender) obviously has to do with the fact that a great number of delegates are pastors - some sitting qua office, some qua vote by their local unions. This has to bring a statistical bias (i.e. if we had more female pastors, the gender bias might be somewhat reduced). The age bias has to do with experience. To be “noticed” as a potential delegate you will have to build a reputation - so that people will think: this is someone who could represent… It probably is rare - and could only be overcome to some extent if each (age) section would choose their own delegates (though the same principle would apply).

My remaining question … is there a list of names anywhere?

In the nominating committee: the current working heart of our congregations 30-50s under-represented-- 29% instead of the 36% selected to make decisions; our future church more under-represented-- 1/3 of the under 30 deemed mature enough to be delegates. And of course the obvious gender skew-- by a 1:4 ratio. Even with the over-representation of pastors, the people who run our churches are not being asked to run our church.

The distribution reflects the composition of the local church leadership of elders and deacons. the delegates were selected regionally not centrally. The implication of the analysis is faulty. A better issue would be to examine how the nominating committee was selected. The fact is the rest of the delegates are just show boating. Tom Z

Totally agree! Not only are the over 70s (75-85 to be specific) the fastest growing demographic in North America, Europe and parts of Latin America, but they often represent viewpoints more in sync with far younger cohorts–in particular on the question of women ordination in surveys I have conducted, among Inter American Division (IAD) congregants, for instance. They’re also, in the North American Division (NAD), the largest givers of capital assets to the Church.

What we need to watch for is
The Stuck In Time groups.
–vs–
The Progressive groups.

We need more people who can envision a World Church “on the march”, capable of changing, and being relevant to the Masses in the World, and be able to embrace the World for Christ.

Not a World Church mentality that is OK with their borders, OK with where the Church is, and have dug in and refuse to move any further.

Christ said I have already over come the World. He sent out his followers to infiltrate the World and claim the world as his by invading and persuading the inhabitants to emigrate and change their citizenship to His country.
A King is only a King of a Kingdom when he has subjects. It is our job to invite everyone, and make a place for everyone to be His subjects.

How many are “stuck in time”, and how many can have a Progressive view of Adventism as it claims the World for God?

Any stats information regarding the delegates’ level of education by division?

Probably the best piece I’ve seen on having no concept of how things work. Do you think the US senators and Congressmen “represent” the US citizenry based on the same poor logic used here? But they were all voted by their peers.

These graphics don’t reveal some significant points. What is the experience and involvement level of these members?
Should 45% of the nominating committee be composed of under 30 year olds with 57% being female?

What do they do with their lives? Are they experienced enough to know what the crucial issues are of the church?

Is Jesus up there in heaven, biting His nails, anguishing over a WO vote or who will be next president of the remnant church?

In my opinion, this whole GC session is a back burner , irrelevant mass meeting of discontents and institutional flag wavers.

The health of the SDA denomination is generally tied to the competency of middle managers who are the pastors.

If the SDA denomination went from 18 million members to 18, Jesus would still be able to finish the work.

Any stats information regarding the delegates’ level of education by division?

At least you are scratching to get below the surface.
These stats reveal but also fail to reveal. What is the education, denominational experience (how long SDA member) the consecration level, and how can that even get indicated? One can be an SDA 40 years and be very ignorant of contemporary issues. It would turn into a convoluted Excel spreadsheet.

What is the purpose of this article and stats?? To get more visibility/input from the general SDA population?

Then get the GC to initiate polls from the laity like I have posted.

Try getting members to answer poll questions quarterly…weekly on the quality of their weekly worship experience , attitude/morale and spiritual education.

Do most here and this site/periodical esteem the SDA GC and/or bureaucracy as an unfair, mismanaged, ill represented, oppressive, discriminatory leadership group?

Anyone think that making 57% of SDA pastors, female would be a significant improvement for the denomination?

Gideon
IF 57% of ALL SDA Pastor were Female, THINK!! how Many More SDA Pastors there would be out there inviting people into the Kingdom of God!
How Many MORE SDA church plantings there would be.
We recently had an article by an Ohioan Pastor telling about the near demise of so many churches in that conference. That is probably NOT an unusual situation in most US states.
Here in Georgia we have a LOT of counties that have no SDA presence. Think what more SDA pastors might be able to do in these areas?

When I came back to adventism after 20 years of being out of the church, I was stunned by how little things have change. Adventists, like many Christian denominations have a Crisis of relevancy and we are seeing that crisis in real time in San Antonio.

I can’t help wondering whether this article would have been written if the GC voted to abandon certain key doctrines (particularly those which are routinely mocked and attacked here at Spectrum), embrace the Emerging Church movement, and jump on the social gospel bandwagon. Somehow I don’t think there would even be a discussion. It all depends on whose ox is being gored.

Delegates should be chosen based on ability and experience, not their age, ethnicity, or gender. A quota system would be very counterproductive. It would pit various demographic groups against each other. Jesus did not chose the future leaders of the church based on their occupation, age, or ethnicity. He picked those who were the most receptive to the truth. Today He would have been criticized for not including women, Romans, Samaritans, etc., etc., and for including too many fishermen. This fixation on demographics is silly. Reminds me of something that might occur on the playground of an elementary school.

No quota, Birder, just more representative. Are you represented at the G.C.? Yes!

Are most of the church membership? Not at all. Not being represented means your voice is not heard in the business process. That’s unacceptable for those who are Christ believers.

The photo in the church population graphic of the old woman who looks 80 – 90 but represents those in the 60 - 69 category needs to be replaced. It is ridiculous.

If you don’t like the outcome, criticise the process. 2 points

Try as hard as you might, you can’t get around these 2 points.

The point of the infographics are about representation, and while the data may not represent the general population, the delegate profile is likely less skewed when you consider the makeup of the SDA Church. I think these statistics are closer to representing the decaying church demographics of SDAs. Consider this graph from the Adventist Gleaner Magazine 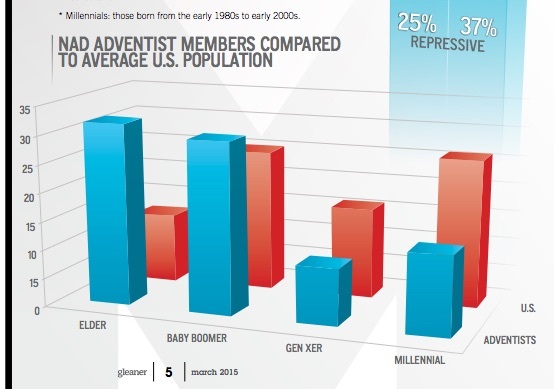 As a church we over-represent elders and boomers. So duh. Delegates will look like this. My point earlier is that data presented this morning suggests that “Church growth dropping fast. From 5% in 2010 to 1.5% in 2014. On track for “zero growth” by 2020.”

Why? Go to the bar graph of where we underrepresent the general population. Millenials and X’ers. From Study of Adventist young people still in the church Adventist millennials are significantly more likely than average Christian millennials to feel their church is doubtless, exclusive, antiscience, overprotective, shallow and repressive. So yes, skewed delegates will stay a course of decay that alienates the the younger generations. We share this with other Christian denominations and it is a crisis.

By continuing to perpetuate current decaying demographics in our election process rather that a future generation focused demographic we sacrifice the future to cling desperately onto our present decay and past glory.

Let me be clear. We are at a crisis & crossroads in our Church history and it is a crisis of relevance to generations coming up now. And it does not bode well for the future of our church that we just re-elected a leader who has been at the helm over the years that our church growth slid by 70%.