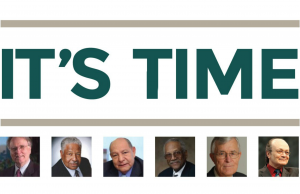 "I think it's very, very important to remember that we didn't come to this moment hastily," says former General Conference president Jan Paulsen in a just-released video from Adventist "elder statesmen." The video, "It's Time," features six senior Seventh-day Adventist Church leaders who are speaking out publicly, some of them for the first time, in favor of allowing women's ordination to move forward.

In addition to Elder Paulsen, Ted Wilson's immediate predecessor as president, the video includes statements from Pastor Charles Bradford, president of the North American Division from 1979-1990; Elder Alejandro Bullón, a pastor and evangelist to South America and throughout the world from 1969 to the present; Pastor Calvin B. Rock, General Conference vice president from 1985 to 2002; Elder William G. Johnsson, editor of the Adventist Review from 1982 to 2007; and Elder Angel Rodriguez, a researcher for the Biblical Research Institute from 1987 to 2011.

The five-minute video contends that "It's time to put mission first."

The video was released on a website called "From The Heart: Thoughts on Mission and Unity from Adventist Elder Statesmen," and spread quickly on social media.

Zdravko Plantak, a professor of Religion and Ethics at Loma Linda University wrote on his Facebook page, "There is something extremely important and valuable when we hear our church elders and statesmen, who have led this church for decades, talk about the importance of voting YES to the question of Unity of the Church and Yes to its Mission going forward - and doing so in saying YES to the vote that is before the global church in July."

Women's ordination has been a source of discussion and study in the Seventh-day Adventist denomination for over four decades, and the six speakers in this video have been among the church leaders who have shepherded the discourse through the entire study process.

This is a companion discussion topic for the original entry at http://spectrummagazine.org/node/6785
7 Likes
owusugyamficliff May 1, 2015, 12:30am #2

WOW! I can’t say anything further. These are most respected and experienced top Adventist leaders. I can’t put myself into the fallacy of hailing popular men, but these are people I do respect and admire very much. It’s time indeed!

George, You’ve got a series of super tsunamis heading your way. Do you want to rethink your WO “prophecy” SA2015? 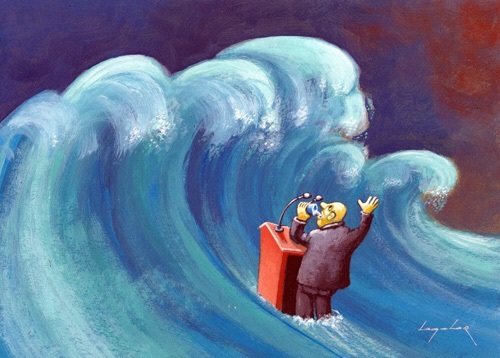 But what do 1 million Zambian Adventists care what these guys say? The United States will soon be a backwater of Adventism.

After the next round of retirements, I imagine there will be a lot of other elder statesmen who can then join them!

I fear that serious damage will be done to the global unity of our church if we do not allow those parts of our global family, for whom time and culture have come, the right and authority to grant women equal access with men to the ministry of our church.

Now they are retired, these men can say what they really think.

That they could not say it while working is a condemnation of the organizational structure.

And yet ceding the GC the right to regulate this issue is to give power to this broken organizational structure.

The Union Conferences should maintain their autonomy, and explicitly say “This vote is irrelevant - we are going to ordain women, or do anything else that our membership instructs us to do”.

The SdA bottom-up power structure is a vast improvement on the Roman Catholic top-down one. It should be fought for, and should not be sacrificed for the PR value of some GC vote.

That they could not say it while working is a condemnation of the organizational structure.

I would strongly suggest that all voting delegates to the SA2015 GC undergo orthopedic consultation, fully paid by Adventist Risk Management, to determine viability of their spine.

Nothing good will come out of this.
Lord Jesus, come quickly.

The most lively Sabbath School classes are populated by retirees—they have nothing to lose by speaking their minds.

The quiet influence of Alejandro Bullon and the impact of his support for women’s ordination cannot be exaggerated. He is revered. Not every great man or woman can be characterized as legendary, but that characterization fits him well. I think of a playful conversation many years ago in which the participants were speculating about whether someone living today might be recognized sometime in the future as having the gift of prophecy. Again, this was just a playful conversation. But one participant, a major Seventh-day Adventist Church evangelist who in all fairness I should not name, offered that Elder Bullon might be that person. The conversation is hearsay and I am not opining on the issue one way or the other. But I feel like expressing what immediately comes to mind upon reading this story.

Something else comes to mind. The statements of these elders in all gentleness opine that Scripture is not clear on the issue regarding women’s ordination. I think these statements reflect an intentional effort to curb frankness in an effort to promote church unity. The reality of the matter is that Scripture is very clear. Opponents of women’s ordination utilize the same hermeneutical approach to Scripture as that utilized by Christian apologists for slavery. I dare say that the moral obtuseness of opponents of women’s ordination is no less palpable than the moral obtuseness of Christian apologists for slavery. To not recognize that Scripture fully authorizes women’s ordination is ludicrous. I don’t know if anyone ever pointed a finger in the face of the racist Benjamin Palmer, a great Christian man who founded Rhodes College, and rebuked him for his prejudice. I don’t know if such an approach would have been effective. I guess this is a question about interpersonal relations and I suppose that the exceeding gentleness exhibited by the elders in pursuit of church unity is understandable.

[quote=“elmer_cupino, post:8, topic:8236”]
I would strongly suggest that all voting delegates to the SA2015 GC undergo orthopedic consultation, fully paid by Adventist Risk Management, to determine viability of their spine.
[/quote] Buddy, this is not funny. “Is not wisdom found among the aged? Does not long life bring understanding?” ~ Job 12:12. Do you want to reconsider your comments?

Do you want to reconsider your comments?

Thank you for your concerns.

You’re very kind but I stand by my comments. We need delegates who cannot be bought or sold, individuals who will stand by principles, believers with vision and courage. Otherwise, how else can the church move forward?

As if something good is already happening without it…

It takes no great courage to speak out when your pension is secure.

What if the great, new innovative corporations today discouraged new ideas? There would be no Microsoft, Apple, Google and dozens of other companies begun by young people who did not have to wait for approval to make suggestions.

MOF, there would be no Adventist church had the young, led by the Holy Spirit waited silently until their elders passed on to feel free to begin a new movement. Some were even excommunicated! Adventism is led by old, white males just as the other American religion with similar memberships. Until some prominent pastors still short of retirement speak out, the “Old Guard” will prevail, but the unions will be led by those who believe in the equality of all.

Elmer’s right: a good orthopedist or chiropractor could provide strong support ideally in a booth before voting time.

We need delegates who cannot be bought or sold, individuals who will stand by principles, believers with vision and courage.

Your latter comments seem different, I will ascribe to that as long as that has nothing to do with a person’s age.

It is not their age; it is their secured pension status that magically frees the mind.

The best parts of this are those comments about ordination being but a recognition of gifts God has granted either a man or a woman to do the work of mission. All can serve in mission, even now. Ordination or not when God calls and gifts a person their mission is theirs to perform for His glory. What is holding us back is the wasted time in debate on this thoroughly studied issue reaching no conclusion that women CANNOT be ordained. Why are we fighting over a recognition of a gift? Why are we struggling so hard over a church governance issue that should be obvious on its face: God calls, we recognize.