Adventist University of Health Sciences Inaugurates Edwin I. Hernández as Its Second President 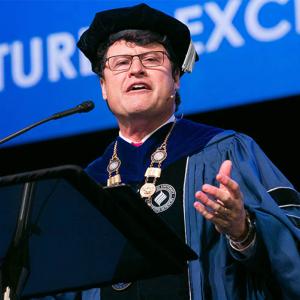 On Thursday, January 11, 2018, Adventist University of Health Sciences (ADU) hosted the inauguration of its second President, Edwin I. Hernández. The school’s founding President, Dave E. Greenlaw, Ph.D., retired just after the University’s 25th anniversary last July. Dr. Hernández served as ADU’s Provost for two years prior to succeeding Dr. Greenlaw on August 1, 2017. Under his leadership as Provost, ADU has sharpened their standards, embraced innovation, and expanded their degree programs.

The inauguration brought together notable dignitaries from several universities as well as the President and CEO of Florida Hospital, Daryl Tol, and the Mayor of Orlando, Buddy Dyer, to speak and welcome the new President.

Dr. Hernández has been a leading scholar and strong advocate for Christian education, and has led several philanthropic urban initiatives and research studies, particularly regarding Latino/a communities in need. Some of his most notable achievements have included serving as Vice President of Academic Affairs at Antillean Adventist University in Puerto Rico, Program Officer for The Pew Charitable Trusts, and founding Director of the Center for the Study of Latino Religion at the University of Notre Dame.

After Hurricane Maria’s destruction in Puerto Rico, ADU, under Dr. Hernández’ direction, has lowered barriers to entry for displaced citizens who have relocated to Central Florida as well as participated in the “Blessings for Puerto Rico” fundraising drive and other donation efforts.

At the Gala dinner following the inauguration, Dr. Hernández also unveiled the Presidential Scholars Award, which will be awarded to freshman undergraduates at ADU who exhibit extraordinary potential to be the transformational leaders of their generations with the option of yearly renewal, up to a max of four years.

Adventist University of Health Sciences (ADU) is a Seventh-day Adventist institution specializing in service-oriented and guided by the values of nurture, excellence, spirituality, and stewardship, the University seeks to develop leaders who will practice healthcare as a ministry. ADU fulfills this mission by developing skilled professionals who live the healing values of Christ.

This article was written by the Communications team for Adventist University of Health Sciences.

This is a companion discussion topic for the original entry at http://spectrummagazine.org/node/8525
1 Like