Adventists in Mexico Assist in Aftermath of Latest Earthquake 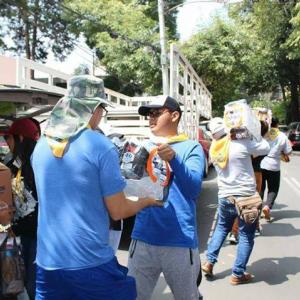 Hours after a powerful 7.1 earthquake struck Mexico City on Tuesday, September 19, toppling dozens of buildings and homes and killing hundreds, Seventh-day Adventists sprang into action to assist in the recovery effort.

Top church leaders said no loss of life among church members has been reported so far. The earthquake took place on the 32nd anniversary of the powerful earthquake that hit Mexico City in 1985, killing more than 10,000.

Local churches and schools across Mexico City opened their doors to collect food and medicines to be distributed to the victims of the quake, said Jorge García, communication director of the church in Central Mexico.

“You could see master guides and church member volunteers showing the love of God to people in need in the streets, by hospitals, schools, and buildings,” said García.

Banni Fuentes, 19, a youth leader in the metropolitan region, connected with dozens of young Adventists and youth leaders across the city after the quake to take part as a volunteer.

“There were many young people preparing food and taking it to rescue workers and volunteers,” said Fuentes. “There were many who also prepared and delivered meals to hundreds of people making their way into shelters across the city.”

Communication has been sporadic since 40 percent of the city has been without power, he added.

Dozens of church administrators, department heads, pastors and local church members also joined in to assist during the search-and-rescue operations across the city, church leaders said.

President of the church in Central Mexico Pastor José Dzul met with the church leadership in the city yesterday to plan the immediate response.

“We are so pleased that our church leaders and members in different churches moved into action after the quake to collect food and supplies for those affected,” said Dzul.

Hundreds mobilized setting up food dispensaries and medicine stations across churches and schools where people can donate toward victims of the quake.

“We want to continue supporting their efforts to provide food to the victims, to their families, to volunteers and workers spread out in the city while they labor in rescue operations,” said Dzul.

Pastor Carlos Cesar González and a few church elders from the Tacubaya Adventist Church in the metropolitan area took off hours later to see if they could help with nearby rescue operations, said Dzul. They stayed on helping carrying out debris from a collapsed building until early the next morning.

“One elder told me how delighted they were to have helped rescue three persons from the rubble during the night,” said Dzul.

The greatest challenge the church faces now, said Dzul, is that “the infrastructure of the church is very much affected,” he said. “Our schools and churches have structural damage, some more than others, but we still need to perform thorough damage assessments,” explained Dzul.

“Obtaining resources so that these facilities can run once again, will be quite difficult,” he added.

Many members’ homes, businesses and properties were damaged or destroyed. In the days ahead, top church leaders in Central Mexico will visit its churches, schools, and members’ homes to encourage members to continue helping each other.

“Everything that’s happening in our country and around the world is telling us that Jesus is coming soon,” said Dzul.

The church plans to work with ADRA Mexico office for upcoming projects of assisting with laminate roofs to needy communities across the city.

“Ever since the first earthquake hit two weeks ago, we have focused on providing food for the victims of the quake,” said Pastor Moises Reyna, president of the church in the Inter-Oceanic Mexican Union. The 8.2 magnitude earthquake shook the states of Oaxaca and Chiapas on September 7.

“It’s like earthquakes love us or something,” said Reyna. “We have not planned that far ahead yet because we are just dealing with getting through with initial response to church members and the general public.”

The epicenter of the earthquake on Tuesday was right through the state of Morelos, where buildings collapsed and many people were left homeless. “Several church families lost their homes and are now living with family, friends, or neighbors,” said Reyna. “We are watching our church families closely and providing the spiritual and physical needs they need at this time.” Additional assessment of member homes is pending, he said.

In Jojutla, the worst hit region in Morelos, the church set up stations where meals are being provided daily and food baskets and bottles of water are being distributed to the most affected families.

“Some 500 master guides and church members join the efforts helping people in their homes and help[ing] clean up the debris left behind by the quake,” explained Reyna.

There are four churches that were damaged by the earthquake and three schools as well, reported Reyna. These schools will not be open until government authorities evaluate damage and rebuilding can proceed, Reyna explained.

“We only know that in the midst of the crisis, we can trust that God will help us,” said Reyna. “God has His people ready for this moment, for He gives us wisdom to move forward.”

“We just sent off a large truck with four tons of food and relief supplies to Oaxaca today,” said César Hernández, ADRA Mexico director. More packaging has been coordinated for Mexico City families this week. The ADRA Mexico office, which is stationed in Mexico City, began assessing needs hours after the quake.

The initial response plan will benefit some 1,500 families, which is approximately 7,500 persons, affected in Mexico City, and the States of Morelos and Puebla, reported Hernández.

“Our main plan is to select groups of families whose houses were destroyed or damaged by the earthquake and have no economic conditions to cope with the situation and are in need of external support to survive the emergency situation,” explained Hernández. “We are working with local authorities to focus on families with children, the elderly and those with disabilities.”

Each family will receive a seven-day supply of food, including corn flour, rice, pasta, oats, beans, lentils, cooking oil and more, according to Hernández.

“In addition, roofing sheets will also be distributed to 514 families, as well as some 600 mini electric stoves, since people are not able to use their gas stoves due to damaged gas pipelines,” he added.

“This is what we call in ADRA a mega disaster with more than 50,000 people affected,” said Hernández. “We will continue to provide assistance during the next few weeks and keep assessing further needs in the aftermath of this powerful earthquake.”

This story was written by Libna Stevens and originally published on the Inter-American Division website.

This is a companion discussion topic for the original entry at http://spectrummagazine.org/node/8262