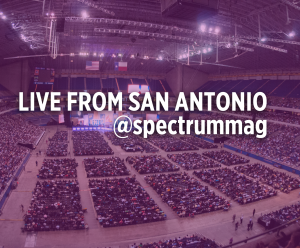 Good Morning from San Antonio, Texas where the Alamodome is filling up quickly. The moment's business session begins at 9:30 Central Time, and ordination is the only item of business on today's agenda.

Spectrum will be covering the event live in two ways. First, we'll be live-tweeting the business session. You can follow us our OFFICIAL TWITTER ACCOUNT for moment-by-moment updates through the whole day. Second, we will be broadcasting live on Periscope, a video-streaming application. We will give you the live link to that Periscope feed as soon as the live broadcast begins.

Meanwhile, be sure to read this article about the Actual Significance of the Ordination Vote, and sign the Adventist Unity statement at www.Unity2015.org.

Whatever happens today, count on Spectrum for un-filtered, honest, and instantaneous updates on this historic event.

This is a companion discussion topic for the original entry at http://spectrummagazine.org/node/6946
3 Likes
GeorgeTichy (George Tichy) July 8, 2015, 3:00pm #2

Good job with the periscope Alexander!

We’ve got over 600 following along on Periscope and we’re live tweeting the meeting moment-by-moment. Join us. If you’re on Twitter, use the hashtag #MyChurchToo for retweets from @spectrummag

Here’s the link for the afternoon periscope session: https://www.periscope.tv/w/aG1rUDI5ODk1NDZ8MzYwOTg0NTURvyK7TCBgkd7vNj4hFXcpTjtVP6elbJl57aFDaNMLEA==

A little bit nervous, Prophet? Don’t be afraid, there is no consequences for false prophecies, we all know it very well. You can always say that it was only “conditional”.
But after all those decisions of previous days, I’m beginning to be a follower of yours.

Good job with the periscope Alexander!

it really is a good job…it may be a better view when the yellow cards go up, than to be there in person…

Jeremy,
Unless I am mistaken, I read a tweet saying that TW said they will be using secret ballots. Maybe those will be RED!!!

Not a bit! Everything is going as planned so far!..

this is so sad…

“Rag” is another name for a paper or magazine. I was not meaning to be insulting, but really more sort of being down home, as in a casual easy-going relationship

This indeed is standard vernacular from my childhood. We always referred to the town newspaper as the local rag.

Allen,
In case they don’t let you stay, there will be immediate “grave consequences:” I will walk away in solidarity to you!

Another prophet around, uh?
Competition is always good…

Why is the Periscope image 90 degrees off right now?

It’s just stopped. Are you getting any breaks in the stream.

It’s back to normal. I thought things there were going to be upside down soon…

But Yes, some breaks in the stream now.

And that after someone had just tweeted a question as to why Maskala was still standing in line???

It came back, but it’s gone down again

A lot of the audience don’t like free speech. Terrible response after Jan Paulson.

Is anyone from the Spectrum team reporters on the scene available to give us a report here as to what has happened… and what is happening currently?

even more than the lack of respect shown to Paulsen I was dismayed at the amount of time that was wasted on “points of order”… most of which only acted as delaying tactics which robbed delegates who wished to speak opportunity to do so.

@GeorgeTichy … is there a technical (or common) name for this type of manipulation?

Seems like the “Jesus had ONLY men, so it MUST be Men for the next 2000 years” mentality is everywhere.
I wonder how it would have LOOKED IF Jesus had a couple of women,
AND Peter was in the Fishing Boat NAKED?
WHERE were the HIS and HERS bathrooms?
One tree for HIMs
One tree for HERs?
Bathing
His Creek
Her Creek
ETC.