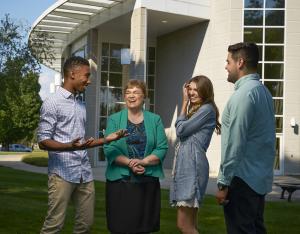 Earlier this week, the 2018 U.S. News Best Colleges rankings were released, which included Andrews University as one of the country’s most ethnically diverse national universities.

The ranking comes after a decade of significant diversification for Andrews University; in recent years, the university was listed as second most diverse in these U.S. News rankings, but a decade ago, the university ranked 13th in the same campus ethnic diversity category.

In response to this new ranking, Andrews University President Andrea Luxton notes that “in a global and diverse environment, a university community that reflects those realities offers an unparalleled opportunity for university students who are preparing to change the world; this is a core aspiration of our university’s mission statement: Seek Knowledge. Affirm Faith. Change the World.

“As a result, we’re proud to be ranked by the 2018 U.S. News Best Colleges as a joint number one national university within their annual rankings for Campus Ethnic Diversity. In addition, as one out of every five of our students comes to study from outside the United States each year, we’re also proud to be recognized as the 11th ranked national university for schools with the most international students.”

As Andrews University seeks to deepen commitments to and possibilities for its ethnically and culturally diverse community, it has recently appointed its first vice president for Diversity & Inclusion, Michael T. Nixon.

“Understanding and navigating an increasingly globally focused and diverse environment for careers and life isn’t something that is simply learned in a classroom,” says Nixon.

In the overall 2018 U.S. News Best Colleges rankings, Andrews University was #192 on a list of 311 National Universities included in that report.

Andrews University was also part of the rankings in “A+ Colleges for B Students,” “Most Students Receiving Merit Aid,” and “Highest Proportion of Classes With Fewer Than 20 Students” (this latter measurement seeks to assess which universities offer more personal instruction through a higher number of smaller classes—Stanford, MIT and Pepperdine all had similar rankings to Andrews University’s in this category).

Founded in 1874, Andrews University is the flagship institution of higher education for the Seventh-day Adventist Church and offers more than 200 areas of study including advanced degrees. Its main campus is in Berrien Springs, Michigan, but the University also provides instruction at colleges and universities in 19 countries around the world.

This article originally appeared on Andrews University's website and is reprinted here with permission.

This is a companion discussion topic for the original entry at http://spectrummagazine.org/node/8233
tedrobertson1 (Ted Robertson) September 14, 2017, 1:23pm #2

What does ethnic diversity mean ?
Does that mean in the cafeteria we have
Hommus and zaatar and low GI flat breads

Trends amaze me. When I graduated from college–nobody caried about diversity. It was not even at the bottom of the agenda.

While good and honorable this new creed demanding diversity appears. There is, in my opinion, real danger. What could that be? Well, I see each ethnic group and color seek their own corner, their own cultural views. In the end, will it promote unity? I am not so sure that emphasizing diversity will create a unified Advent Movement. At Camp Meetings we have a Sabbath service for the Hispanic’s and the English. We don’t even worship together. As times goes, I think we will move poles apart. Ideals and values will become culturally adjusted. Truth is modified by culture. The church should let me hold to my customs on how the Sabbath should be kept or how EGW’s diet counsels should be seen. On an on it goes as the diversity wheel turns.