A panel of Adventist historians addressed the theme “Apocalyptic Religion and Political Conflict” on January 5 at the American Society of Church History’s 2020 Winter Meeting in New York City. They presented findings of recent and ongoing research that gives promise of major advances in understanding the history of Adventism’s interaction with religious and political forces in American culture and for illuminating the impact of religion in American history more broadly.

While the presenters were all Adventists, a prominent scholar from the broader scholarly community, Matthew Avery Sutton of Washington State University, was chair and commentator for the session. Sutton’s widely read works on American religious history include American Apocalypse: A History of Modern Evangelicalism and, most recently, Double Crossed: The Missionaries Who Spied for the United States during the Second World War.

Jeffrey Rosario led off the presentations with “Apocalyptic Anti-Imperialism and the Philippine-American War, 1898-1902.” Based on research currently underway for his dissertation at the University of Cambridge, England, Rosario’s presentation suggests that the Adventist critique of American imperialism around the turn of the twentieth century was far more extensive than previously realized. A broad sector of Adventist leaders spoke out against the militaristic jingoism connected with the Spanish-American War and even more pointedly against the ensuing annexation of the Philippines and brutal war to crush the Filipino independence movement. With this “national apostasy” from constitutional principles of republican government and civil liberties, they proclaimed that the American republic was, in Rosario’s words, becoming “Rome 2.0” — a fulfillment of apocalyptic prophecy (Revelation 13) that must temporarily be resisted.

Rosario also reported a discovery of a growing body of evidence that Adventist writers expressed sympathy for the grievances that drove the Boxer Rebellion, the violent uprising against western imperialism twinned with Christian mission that took place in China this same time period. He further contended that illuminating Adventist anti-imperialism could prompt attention to other, similarly neglected religious actors of the era who dissented from dominant view among American Protestants that America’s march to empire was advancing the spread of Christianity and democracy to the world.

If Rosario’s presentation countered perception of a quieter, more accommodating, at times even celebratory, approach toward authoritarian government on the part of Adventism as the twentieth century progressed, Kevin Burton’s presentation offered provocative new light on how the change came about. Burton, who is completing a doctorate at Florida State University and joined the History Department faculty at Southern Adventist University last year, spoke on “Domestic Surveillance, the Great War, and American Religion: Toward an Understanding of the Reinvention of Seventh-day Adventism.”

Burton has discovered extensive documentation detailing investigation of Adventists by the Department of Justice during World War I for possible violation of the Sedition Act of 1918. Some of the DOJ’s Bureau of Investigation officers saw Adventism’s message about the imminence of a new world displacing all human government, and about the oppressive role that the American government would ultimately take in the run up to that, in the reddest of hues, aligned with leftist, pro-labor, anarchist radicalism that imperiled American democracy.

Burton pointed out that Adventists were viewed with the same suspicion that was cast on the International Bible Students (later called Jehovah’s Witnesses), whose leaders were prosecuted and imprisoned. Adventists avoided a similar fate by being more pliable to governmental pressure. Burton cited, for example, the Southern Publishing Association’s agreement to withdraw and destroy existing copies of The Return of Jesus (1917) by Carlyle B. Haynes, deemed by a BI official as “vicious” in its unpatriotic sentiments. In the 1918 revision of Bible Readings for the Home Circle, one of Adventism’s most widely circulated books, the persecuting second beast of Revelation 13 was identified as a modernist religious combination that would emerge within and finally take over America in contrast to the 1916 edition that identified it with the United States in a more direct way. In response to rigorous government surveillance during World War I, Burton suggests, Adventist leaders muted outspoken criticism of the nation’s violations of the religious and civil liberties and sought to re-cast the church’s public image as “loyal and patriotic.”

Burton also discussed evidence that governmental pressure was one (among several) factors influencing a revision of the denomination’s administrative structure in 1918. The U.S. Department of Justice warned that the General Conference would not be allowed to continue a direct financial relationship with the overseas division conferences created in 1913 because these entities, accountable to their own constituencies, made administration of the church in hostile nations too autonomous from the American-based denomination’s central administration. The division conferences were jettisoned in favor of the current system in which divisions of the General Conference give leadership to their respective territories.

Michael W. Campbell, who teaches in the Religion Department at Southwestern Adventist University, elucidated further dimensions of the post-World War I reconfiguration of Adventism in “Seventh-day Adventists, Eschatology, and Fundamentalism: Explorations in Race and Gender.” Campbell’s book, 1919: The Untold Story of Adventism’s Struggle With Fundamentalism, gave the church the expertly-contextualized historical perspective needed to guide centennial reflection on the landmark 1919 Bible Conference. In his January 5 presentation, Campbell further probed the impact of Adventism’s self-declared alignment with fundamentalism that was one outgrowth of the 1919 Conference.

Campbell described the admiration that church president A.G. Daniells and other Adventist leaders held for the popular and influential dispensationalist prophecy conferences as a key point of contact with fundamentalism. Though Adventists did not surrender their distinctive teachings, they aligned with the fundamentalism movement at the point of eschatology as a matter of form and style, including the drawing of battle lines against liberal or modernist Christianity. That alignment, Campbell argued, included a shift from a relatively progressive orientation on race and gender before World War I to a repressive pattern of bifurcation that formalized white male dominance as never before in the denomination’s history.

Michel Sun Lee, who is completing her dissertation for a PhD from the University of Texas at Austin, unfortunately ended up being unable to attend the conference and present her paper, “Engaged Temporalities: Late Nineteenth Century Seventh-day Adventists Activism for Sabbath-Keeping and Temperance.” In his response to the papers, Sutton highlighted how Lee’s paper further developed the picture of late nineteenth century Adventism’s engagement with public issues and their willingness to join with other Christian groups such as the Woman’s Christian Temperance Union in so doing.

The careful, sympathetic, yet critical response to the papers given by a scholar of Sutton’s caliber signals a welcoming stance toward scholarship on Adventism in the history of Christianity guild. But it is also a tribute to the quality of the panelists’ papers and their success — affirmed by Sutton — in showing how historical scholarship on Adventism need not be parochial but rather can add to the understanding of wider historical developments.

Douglas Morgan is a graduate of Union College in Lincoln, Nebraska, and the University of Chicago (PhD, History of Christianity with an emphasis in American religious and social movements). Since 1994 he has served on the faculty of Washington Adventist University in Takoma Park, Maryland. His publications include Adventism and the American Republic (University of Tennessee Press, 2001) and Lewis C. Sheafe: Apostle to Black America (Review and Herald, 2010).

It is my understanding from conversations with Fordyce Detamore [who
was an evangelist and missionary in the China area of late 40’s] related
that a number of SDA missionaries would give information about
Communist behavior in the western areas of China to the China
leadership. He and his family were in Eastern China when China
fell to the communists and moved to Taiwan.
[Fordyce prior to this was at the Voice of Prophecy and was the
announcer on the Voice of Prophecy the day they went coast to coast
live.]

Growing up in Uruguay and Argentina, I learned that the apocalyptic beast that covered her warring nature with sheep’s skins was the United States of America. In the mission fields, American missionaries taught what they had learned when at an Adventist college in the USA, and Spanish culture is by nature conservative and what has been learned is considered the last word. Apparently the early missionaries had learned what was current before the church decided to become assimilated to the nationalist culture prominent for some time now. I was somewhat surprised when I came to the USA in 1954 and found that the prominent negative role played by the United States in the prophetic scenarios I had been taught in South America was no longer emphasized, even though its role in the promulgation of restrictive Sunday laws was part of the story. These days, of course, that negative role has also been cast into the trash can. It has been a long time since I heard that American Sunday laws will be the spark that brings about the ultimate-world wide “time of trouble.”

Burton also discussed evidence that governmental pressure was one (among several) factors influencing a revision of the denomination’s administrative structure in 1918. The U.S. Department of Justice warned that the General Conference would not be allowed to continue a direct financial relationship with the overseas division conferences created in 1913 because these entities, accountable to their own constituencies, made administration of the church in hostile nations too autonomous from the American-based denomination’s central administration. The division conferences were jettisoned in favor of the current system in which divisions of the General Conference give leadership to their respective territories. 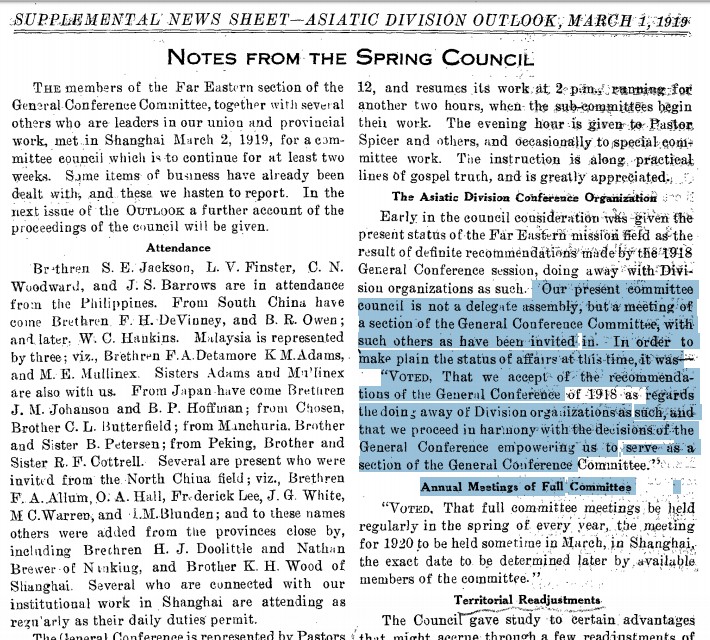 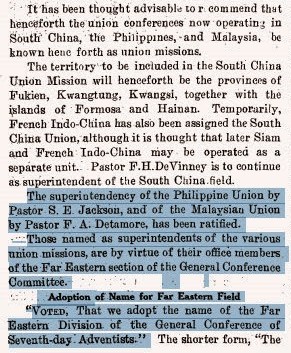 Thanks, Doug, for the report.

When apocalyptic consciousness is genuine, or truly biblical, it does not NOT support religious complicity with the shenanigans and cruelties of political power.

When apocalyptic consciousness is genuine, or truly biblical, it does not NOT support religious complicity with the shenanigans and cruelties of political power.

These shenanigans can be done by the right and the left. And it takes courage to stand up to either. If your fellow religionists all agree with you, and call you brave, but it costs you nothing, that is not bravery, or courage. (Calling Trump a racists, for instance).

Standing against the wind can become difficult when it gets to gale strength.
flapping in the wind is much easier.

So what happened to “stand for the ‘truth’ though the heavens fall” ?

Fortunately our USA nation is not seeking to extend its power, thanks to Presidents and governments of the past and our current president who is committed to protecting our country, its legal citizens, and our economy. But we are told that this day will end before the second coming of our Savior. It is most likely that the Democrat party will destroy our laws and therefore weaken our nation making it vulnerable to lose its sovereignty.

Could we have some sanity in posting and not political posturing with character assignation?

That my friend is up to you.
Go with the flow or stand whatever the cost?