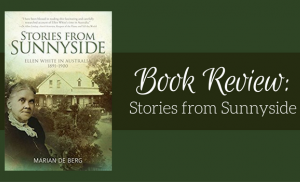 It’s clear from the opening chapters of Stories from Sunnyside, that this book was a labor of love for author Marian de Berg.

De Berg is an administrative assistant at the Ellen G. White/Seventh-day Adventist Research Centre at Avondale College of Higher Education, where she has served for two decades. She also leads tours and trains volunteers at Ellen G. White’s Australian home, “Sunnyside.” This makes her uniquely qualified to capture the everyday life of White’s nine years in Australia, from 1891 to 1900.

Drawing from primary source material, including the personal correspondence, manuscripts, and other materials that Ellen White wrote during this nine-year period, de Berg paints a robust portrait of the beginnings of Adventism in Australia and White’s direct role in building a thriving Adventist community, complete with numerous churches, schools, and sanitariums.

Seventh-day Adventism had arrived on the shores of Australia in 1885, just six years before Ellen White’s own arrival. With a fledgling membership of just 450 Australian Adventists, White had her work cut out for her. Though in her seventies when she came to Australia, White traveled extensively during her stay, attending and speaking at various camp meetings and newly established churches. By the time White left Australia, membership had grown to 2,100 strong.

As an American, I knew very little about Ellen White’s time in Australia. I knew only that she hadn’t wanted to go and did not feel God calling her there, but the General Conference made the decision for her. De Berg touches on this, including the stern letters White sent to GC President O.A. Olsen. In one such letter, White tells Olsen,

“The Lord was not in our leaving America…The Lord did not plan this, but He let you all move after your own imaginings…There was so great a willingness to have us leave that the Lord permitted this thing to take place. Those who were weary of the testimonies borne were left without the persons who bore them. Our separation from Battle Creek was to let men have their own will and way, which they thought superior to the way of the Lord” (74-75).

Despite the circumstances surrounding Ellen White’s arrival in Australia, after returning to America, she reminisced:

Those “battles and victories” are woven throughout Stories from Sunnyside, though it is White’s day-to-day activities, which de Berg captures so well, that most drew me in. It was in reading about White’s daily life that I was able to see not the enigmatic prophet, but rather Ellen White the human being: woman, evangelist, and matriarch.

Ellen White’s hospitality, care, and compassion are all on display in this book. I enjoyed learning more about her Sunnyside home and the individuals who graced its doorstep: White’s family members, large staff, and visitors who needed both quick assistance and long-term care. I imagine de Berg must be a fantastic tour guide at the Sunnyside estate, because her ability to guide the reader through White’s home and expertly craft an accurate narrative for the comings and goings based on White’s own words is truly impressive.

With just ink and paper, de Berg has shaped Ellen White into a whole person for her readers. Within Stories from Sunnyside’s pages, we learn of a woman who personally invested in each new church (303), wore patched and frayed clothes because she gave away every new garment and piece of fabric to those in need (281), and who fed and offered work to every “tramp” who stopped by — of which there were many due to the depression in Australia at that time (214).

One of my favorite chapters in Stories from Sunnyside was Chapter 21: “Ellen White’s Table.” Here we learn that White, along with her family and staff, spent the summer months canning fruit from the orchard, harvesting fresh vegetables from the garden, picking wild blackberries, and baking bread and pies, “thirteen or fourteen pans at a time” in the outdoor oven (148). De Berg also shares the importance White placed on “making mealtimes a happy time together,” which White expressed in the following words:

“How many families season their daily meals with doubt and questionings! They dissect the characters of their friends and serve them up as a dainty dessert…When [you] gather about the table to partake of God’s precious bounties, make this a season of cheerfulness. Do not make it a season of grave decorum as though they were standing about a coffin, but have it a social season where every countenance is full of joy and happiness, where there is naught but cheerful words spoken” (149-150).

Truly, both the Sunnyside estate and the life of Ellen G. White come alive in de Berg’s capable hands. In the foreword, Dr. John Skrzypaszek, director of the Ellen G. White/Seventh-day Adventist Research Centre at Avondale College of Higher Education, sums up the importance of this book best when he says:

This book does not provide an explanatory framework of Ellen White’s prophetic role, nor a theological charter for argumentative debates. It recalls the narratives in the life of a person engrossed in the depth of God’s love. It recalls the memories, the colours and the sounds highlighting qualities such as personal uniqueness, giftedness and value. Perhaps it’s in the places where the rubber meets the road that one finds the authenticity of the prophetic voice—a voice that does not only speak but acts the part of God’s extended hands in the community” (vi).

I would encourage anyone with an interest in learning more about Ellen White’s life in Australia to read Stories from Sunnyside.

When you remove the myriad of layers from the image that the church has fostered and maintained of Ellen White over the decades, you see a real human being who cared about her church, her community and especially her family and friends. The stories of her compassion in Australia and upon her return to Northern California, especially for the farm workers in the Napa Valley, demonstrate she truly lived Matthew 25:31-46.

Perhaps, if this spirit of compassion for people regardless of their place in the strata of society was manifested by the leadership as well as members, our church would truly be a light to the world, a healing balm in Gilead. No one would be ostracized by this compassion since it proceeds from the Holy Spirit.

i’ve read probably all the published egw letters of her time in australia, in addition to any manuscript releases as soon as it has come out…i do think egw’s time in australia was interesting and inspiring, certainly from retrospect…there are many spiritual principles of a practical, overcoming character to take in, stemming from this time…it must have been discouraging to feel banished from battle creek, which she did so much to strengthen over the yrs, but her experience, like joseph’s experience in the pit, just shows that when god is in your life, circumstances, however unfair and evil, have not bearing on your happiness, usefulness, or life trajectory…paul’s experience in philippi was another moment that would have brought a person with no or marginal faith to a screeching halt…but look at the wonderful way that prison incident turned out…

Perhaps, if this spirit of compassion for people regardless of their place in the strata of society was manifested by the leadership as well as members, our church would truly be a light to the world, a healing balm in Gilead. No one would be ostracized by this compassion since it proceeds from the Holy Spirit.

Would that this theme–compassion–were pervasive in every statement, communication, book and social media message released by our church. And that it were the theme of every Adventist’s life and lifestyle.

Sunnyside, Ellen White’s Avondale home loomed large in my boyhood of the 1960’s. I played in its backyard on occasion. And I also remember several times when I travelled around the Avondale community by horse and sulky much as Ellen White had done some 70 years before me, though it was very much a dying art by my time.

Round 1970 our family became next door neighbours to an elderly lady who in her youth had been part of Ellen White’s secretarial staff.

I understand on good authority that sometime after Sunnyside passed from Adventist ownership, that is sometime from the early to mid C20th, it was used for a time as a house of ill-fame. Thankfully it serves a better purpose today.

A very minor correction to point out: Ellen White was 64 (1891-1827=64) when she arrived in Australia and was in her 70s by the time she returned to the United States.

I am looking forward to reading this book. I have recently been transcribing Marian Davis’s letters, written while she and Ellen White were working on the manuscript for The Desire of Ages. It is most remarkable that the author and editor were able to work on this wonderful book so far away from Pacific Press. It took over three weeks for correspondence to travel between Australia and California. The concept for the book changed rapidly from 1891 to 1898. At first it was to be a “Life of Christ” like those published in German, French, and Swedish. But Marian then it would have been hardly more than Spirit of Prophecy, volumes 2 and 3. Then the plan was to keep it two separate books–one on Christ’s connection as the son of God to humanity, entitled, “Christ of Bethlehem: Our Brother,” and a second on Christ’s atonement for us, entitled, “Christ of Calvary: Our Sacrifice.” Ultimately, they decided to make one single book, drawing together the best of Ellen White’s writing on the life and mission of Christ, from Ellen White’s letters, articles, and previous books, with material that went all the way back to Spiritual Gifts (1858) and the Sufferings of Christ (1868), built upon the spine of the Spirit of Prophecy volumes dealing with the life of Christ.

For some time, I have been fascinated by the process of Ellen White’s writing, and I recently updated Gladys King-Taylor’s 1953 book, Literary Beauty of Ellen G. White’s Writings, which calls attention to the elements in Ellen White’s Conflict of the Ages series that makes the series such a pleasure to read. A copy of the updated book is up for sale on ebay. https://www.ebay.com/itm/Literary-Beauty-of-Ellen-G-Whites-Writings-Explore-the-Conflict-of-the-Ages/332778528670?hash=item4d7b255f9e:g:ICkAAOSw2WtbgG7X

I have been reconstructing the process by which The Desire of Ages was written and would be interested to know if anyone knows of a picture of Miss Eliza J. Burnham, who worked on the Pacific Press side of the book setup from 1896 until the book’s publication, November 1, 1898.

If anyone knows of such a photo, please contact me at sabbathrest777@gmail.com. Thanks.