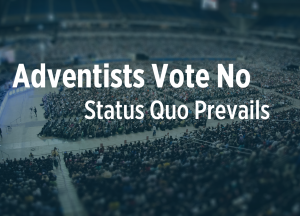 At approximately  6:15pm, on Wednesday, July 8, the answer was "No." Delegates of the 60th General Conference voted down the question, "Is it acceptable for division executive committees, as they may deem it appropriate in their territories, to make provision for the ordination of women to the gospel ministry?"  The action by the General Conference Session delegates means that the Seventh-day Adventist Church will continue to follow the status quo as far as ordination is concerned. At present, it is the unions that approve ordinations.

For most of the church’s history, women, not least Ellen White, have occupied leadership roles in Adventism. The question of formal ordination to Gospel ministry for women has been in play at the General Conference level at least since 1881. From the 1970’s onward, the conversation has been intense, with General Conference discussion occurring several times, though always ending in refusal of equal opportunity and recognition for women. Today delegates to a General Conference Session reiterated that refusal.

Ordination was the only topic of discussion Wednesday, spanning two business sessions from 9:30am to 4:30pm with a break for lunch. Retiring General Conference Vice President Mike Ryan chaired the session that was notable for its decorum. Ryan made a largely successful effort to assure fair and productive interaction among delegates on both sides of the question.  Speakers on both sides (either way most were men) offered biblical arguments.  In addition, those wanting a Yes vote appealed for support in recognition of the Holy Spirit’s call to, and the church’s need for, women pastors.  Those wanting a No vote offered warnings about potential damage to church unity and argued that the whole conversation was a distraction from mission.

Tension erupted following a passionate appeal by former General Conference President Jan Paulsen, targeted primarily at delegates from Africa and South America, urging a yes vote on the question.  Paulsen appealed to delegates to trust one another’s leadership with respect to the question of ordaining women. African delegates booed loudly when Paulsen referenced them specifically in his appeal, and several delegates rose to microphones to register complaints that he was allowed to speak to them in such a way.

General Conference President Ted Wilson also spoke from the front, saying that he would abide by the vote, whatever the outcome. Noting that his views on the issue were “well known,” argued for a “united decision,” and said “agitation on this issue” should discontinue after the vote so that the church’s focus can return to evangelistic mission.  "My prayer," he said, "is, 'Let us stay together.'”

Throughout the day, Chairman Ryan repeatedly asked the audience to refrain from applauding to preserve a spirit of respect for the diversity of views represented in the building. Nevertheless, the audience applauded at many junctures to the repeated frustration.

Speakers on both sides (either way most were men) offered biblical arguments.  In addition, those wanting a Yes vote appealed for support in recognition of the Holy Spirit’s call to, and the church’s need for, women pastors. Those wanting a No vote offered warnings about potential damage to church unity and argued that the whole conversation was a distraction from mission.

Ryan called an end to discussion at 4:30pm, though there were large lines of delegates still at microphones. Delegates voted by secret ballot section by section, and then the votes were counted by hand with cameras rolling to provide transparency.

After the votes were tabulated, Ryan told the room he had the results. He read the vote, and when applause broke out, his voice broke slightly as he once again chastised the audience for the display. Ryan repeated the results once more, and then President Wilson took the microphone to make concluding remarks.

Wilson began with prayer, saying "We humble our hearts before you and each other. We ask that you will make our pathway clear." He prayed for "healing and comfort for each of us, and for the unity that comes through the power of the Holy Spirit." Then added his belief that the Holy Spirit had worked on the people's hearts. "We have a spiritual opportunity to refocus on mission," he said.

Wilson appealed to the authority of the General Conference in session in a statement by Church founder Ellen White, and invited all to "put away any animosity and frustration and unite in the Lord's entrusted mission for his church." He asked that there be no independent action or agitation, signalling his inten to see the issue settled.

The audience sang together the hymn "We Have This Hope," and the audience began filing out of the Alamodome.

This is a companion discussion topic for the original entry at http://spectrummagazine.org/node/6950
1 Like
rohantocharles (Rohan Charlton) July 8, 2015, 11:53pm #2

So disappointing. Not a little disturbing. Just kinda sad really.

So if it’s business as usual, then anyone who is a woman and a conference or union president will continue to be excluded from the GC book of decision holders.

How on earth coulld anyone treat Jan Paulsen that way after all he has done for this church all his life? I miss his wise leadership so much. That kind of action is certainly NOT motivated by the Holy Spirit but by the evil one (Excessive. - website editor).Seeing that was just as painful as losing the vote. May God have mercy on us all!

This kind of behavior begs many questions, at the largest SDA assembly no less!!

The vote was by secret ballot. Delegates voted in secret and no one could see how each delegate was voting. How did fear dominate?

How on earth coulld anyone treat Jan Paulsen that way after all he has done for this church all his life?. That kind of action is certainly NOT motivated by the Holy Spirit but by the evil one.

After being in this denomination, approaching 50 years, including attending church & school board meetings, business and nominating committee meetings I am not the least surprised. Out of over 2000 delegates…wouldn’t you think that several or a bunch are still in the early stages of sanctification?

How on earth coulld anyone treat Jan Paulsen that way after all he has done for this church all his life?

Its the reason why we need to pray for such meetings so that the Holy Spirit takes charge of everyone. Unfortunately some people spent more time criticizing the meetings instead of praying for them. I didn’t like the boos myself. That was disrespectful to Elder Paulsen.

How on earth coulld anyone treat Jan Paulsen that way after all he has done for this church all his life?

Its the reason why we need to pray for such meetings so that the Holy Spirit takes charge of everyone. Unfortunately some people spent more time criticizing the meetings instead of praying for them. I didn’t like the boos myself. That was disrespectful to Elder Paulsen.

I am interested that the GC session has chosen to go with consensus voting rather than the more typical two thirds majority that most normal Conference sessions ask for on a major item.

If one does the math above - the motion was carried by 58.4% - which is well short of the more normal two thirds majority that one would expect on a decision of this nature.

The vote against was only 58.3%. There is no consensus. There is no super majority. The vote was too close to be made operational in any way. Scripture does not authorize the making of church policy by a close vote. Just imagine that over 40% percent of a search committee for a pastor opposed the candidate voted. Would the church proceed on the basis of such a close vote or would the church attempt to forge a consensus? Or imagine that over 40% of the church board opposed the carpet color voted. Would the church proceed with that color or would some other color be chosen? Obviously, no church would ever make operational a vote that is not only uncomfortably close but a vote in which the salience of the minority opposition is so high.

We can be thankful that the vote in the negative does nothing other than maintain the status quo. Women will continue to be hired as pastors, ordained, and elected to administrative office, as the unions who choose to do so authorize.

What is distressing about the vote is that it evidences the reality that the Seventh-day Adventist Church is divided. The Church’s brand, or witness as it were, has now been damaged. The vote is a stunning indictment of the leadership of Ted Wilson, in that he did not do what he could have done to prevent a significant embarrassment to the Church from occurring. I like Elder Wilson and endorsed his re-election, but the verdict of his first term will be that he has been the most divisive GC president in the history of the Church. There has never been more doctrinal fragmentation and Babel-like confusion arising in any other five-year period of the Church’s history than during the last five years, principally because of promotion of male headship theory which stands in opposition to many of the Church’s fundamental beliefs. We can only hope and pray that Elder Wilson will feel the sting of the enormous damage his leadership has wrought and do what he can during the next five years to foster Church unity.

did not even pray or study about it and just went along with their crowd?

Do you know how many did not pray or study about it? Many sincerely hold opposing opinions after praying and studying. I doubt seriously anyone just went along with the rest on such a passionate topic. Mrs. White makes much of the fact that we should not try to be the conscience for another. Some people are ready to see the light, and others’ hearts are not. God does not force us to do something when our hearts are not ready.

No. The HS was not there dictating votes. This was a split vote. God’ vote is that this a human construct, not his rule of law.

Fear has driven all the behavior against WO. It is simple social psychology.

We can only hope and pray that Elder Wilson will feel the sting of the enormous damage his leadership has wrought and do what he can during the next five years to foster Church unity.

What you are saying is that the church who voted him in last time and this time by large majorities is going the wrong direction. He was chosen for a reason by those who chose him. You don’t agree with that thinking. So you say such things. The other side seems pleased with his office and what he has done, and cheers him on.

We are divided. But the ones supporting him have been able to have their way, and you have not had yours. Perhaps humbly submitting would not be a bad idea.

And how would you propose this impasse be solved? A committee could not come to an agreement. TW was not particularly more influential than Paulson, and each was given a chance, I think a very evenhanded procedure. Would you have someone make the decision by fiat, like the pope does it? I think this was a very democratic and open vote, and I can’t think of another way to do it. But maybe you have one?

The motion was not carried. The motion lost by 17 percentage points

This was the vote that has received the most interest and now nothing has changed; the vote accomplished nothing except displayed the immature reaction from many.

But the voting that moved so rapidly and introduced more changes were in the reworded statements of Fundamental beliefs. Has the counting on those votes been reported? Were they each voted separately?