An investigation into smuggling activities involving Seventh-day Adventist Church leaders in Argentina has led to the departure of top administrators of the Argentina Union Conference, according to an official communique. Administrators at River Plate Adventist University have also resigned, and the Adventist Development and Relief Agency (ADRA) has been named in a federal judge’s judicial report.

The Argentina Union Conference wrote on Wednesday that the union’s Board of Directors accepted the resignation of Union President Carlos Gill Krug, Union Treasurer Carlos Giménez Graf, and legal representative, Roberto Giaccarini. The communique cited the need for transparency and the facilitating of the ongoing investigation:

Outgoing leaders are involved in a judicial process involving accusations about the entry into the country of a shipment from the United States destined for River Plate Adventist University (Universidad Adventista del Plata). They made the decision to facilitate and give greater transparency to the internal measures being carried out by the Church, in order to identify responsibilities and modify the processes that allowed the irregularities.”

Federal Judge from Campana Adrián González Charvay in a judicial investigation charged them with defrauding "by means of deception and preventing the proper exercise of the functions of the laws governing customs services" with "the presentation of ideologically false documents and misleading statements."

Newly released documents indicate that De Sousa Matías knew he was in trouble. According to Infobae’s report, on July 22, he told a female confidant in a cell phone conversation, “They are opening every box. Keep praying.” Four days later, the woman with whom he spoke suggested talking with an influential politician. “Good idea,” he said, “we’ll look for an influential politician.”

According to court documents, customs broker Nilda Saira allegedly provided advice to de Sousa Matías on avoiding scrutiny. "Instead of screens, say it is equipment for classrooms," she wrote in an email. De Sousa Matías, in an intercepted email to another individual, stated that Saira offered to "go to the chancellery" to expedite procedures with the Argentine Consulate in Washington D.C. Saira had provided the paperwork to designate the shipment a donation, thereby avoiding paying tariffs.

De Sousa Matías was unaware that his communication with and about Saira was being monitored by order of Judge González Charvay, who has overseen the case. De Sousa Matías was arrested in a raid on the River Plate Adventist University campus in September. He was interrogated by federal officials and released. He stated that the shipment was to be used for medical training by students at River Plate, and that the equipment would be used on medical dolls rather than on humans.

He has since left his position at River Plate Adventist University, along with rector Oscar Ramos.

In a written ruling Judge Charvay said that the presence of the expired medical equipment was likely meant as a means of confusing the gaze or turning the attention of the controlling agents away from the electronic objects and medicine purchased abroad that they tried to pass as donated. The judge found that a large portion of the shipment was purchased abroad, not donated, and as such should be subject to import tariffs. He also found that such attempts to smuggle undeclared goods had likely been going on since at least 2013.

Court documents cited in Infobae’s report indicate that an American from Texas, a certain “John Grinswell,” was also involved in funneling purchased items through ADRA. After consultation with Infobae reporter Federico Fahsbender through social media, it was determined that there was a typo within the court documents. The individual in question is Dr. John Griswell III, medical director of the emergency department at Huguley Hospital. According to an article on the hospital website, Griswell “graduated with a B.A. in theology from Union College in Lincoln, Nebraska. He earned a Master of Divinity from Andrews University in Berrien Springs, Michigan. Fluent in Spanish, Dr. Griswell holds a Doctor of Medicine degree from Universidad Autonoma de Guadalajara, Mexico. He completed his internship and residency training at D.C. General Hospital in Washington, D.C.”

Dr. Griswell did not respond to requests for comment.

On Friday, February 17, when asked for official comment on the situation, the Adventist Church in Argentina pointed to an online video featuring then President Carlos Gill Krug, posted on the union’s Facebook page. In the video, Gill Krug said that the church will impugn the decision made by the judge since it contained several "omissions," "exaggerations," and inaccurate information. He noted that both Oscar Ramos and Jorge De Souza had resigned to make the investigating process more transparent. He said that the Argentinean Union Conference established a committee to investigate, and the South-American Division established another. He also said that this scandal shouldn't be a cause of distraction for the Argentine Church’s ongoing initiatives (when the news broke the church was finishing ten days of prayer and fasting). Gill said the media exaggerated what really happened. He finished the video with a short prayer, asking God to "clean" the church. The president's video message was quickly removed from YouTube after many negative comments were posted.

The video received many negative responses, and on Saturday evening was removed from social media and YouTube. A union representative communicating through Facebook stated that the video had been posted for the benefit of church members on Saturday. After its dissemination, its being posted online was no longer considered needed. Another YouTube user reposted the video here. The church said a new communique was in the works.

Wednesday’s bulletin from the Argentina Union Conference named replacements for the two leaders of the union:

Darío Caviglione has been named president. He holds a bachelor's degree in theology and a master's degree from River Plate Adventist University. He holds a doctorate in ministry from the Peruvian Union University (Universidad Peruana Unión).

The Argentina Union has named Raul Kahl treasurer. Kahl studied public accounting at River Plate Adventist University. He began his work as a cashier in the Argentine Central Association. He served as an accountant and then as assistant treasurer for the Southern Union. In 2012, he was appointed financial manager of the South American Publishing House Association and later served as treasurer at the Southern Argentine Association.

The union’s communique expressed regret for the way “this situation affects our faith community and Argentine society, since [the union] supports ethical and moral values based on the Bible, which promote compliance with the laws. As from the beginning of the case, [the union] reaffirms its cooperation with the corresponding authorities.”

This is a companion discussion topic for the original entry at http://spectrummagazine.org/node/7888
tjzwemer (Thomas J Zwemer) February 23, 2017, 8:42pm #2

This story hits just the tip if the iceberg. Knowledge and consent had to go higher with that evel of purchase. Pay the man or pay the price. TZ

This article contains a factual error. Oscar Ramos, former rector of the River Plate University is not mentioned in the INFOBAE article linked. He has in fact been cleared by the courts. Sadly, he has suffered a heart attack and threatened with loss of credentials after a witch hunt by the South American Division.

In his video to the Adventist Church in Argentina, which is described in the article above, Pastor Carlos Gill noted at approximately the 1:50 mark that both the rector (Oscar Ramos) and the vice-rector (Jorge De Sousa Matias) of UAP resigned in order to allow for a transparent process.

That is consistent with what is written in this article:

[Jorge De Sousa Matias] has since left his position at River Plate Adventist University, along with rector Oscar Ramos.

According with the Judge all were indicted, including Oscar Ramos. None of them was cleared. 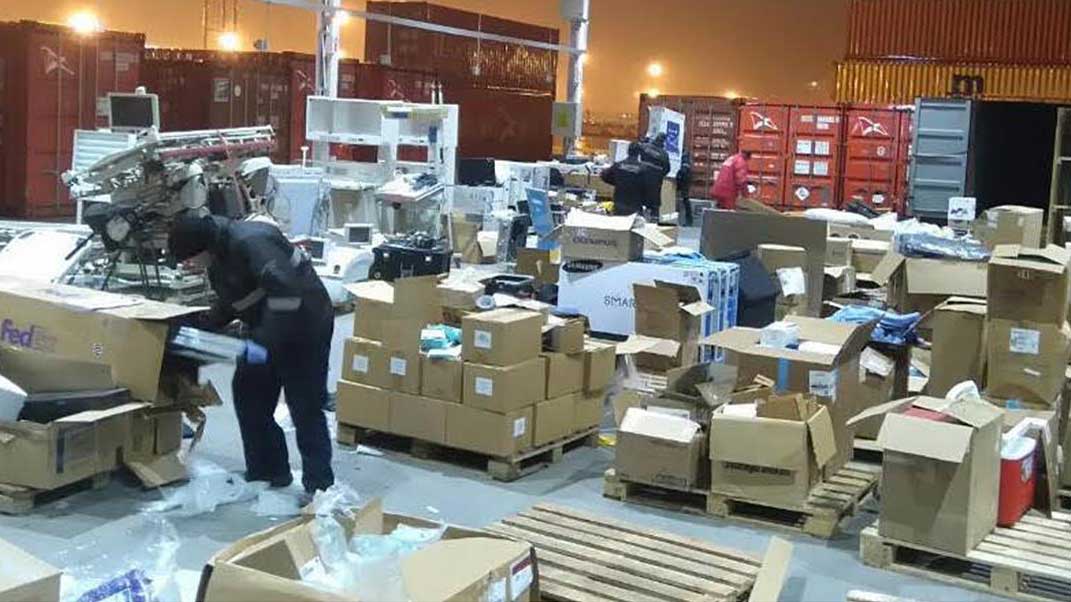 At length, I was able to reach ADRA for comment. They shared the statement given above, which seems to indicate that local ADRA employees worked outside of the purview of ADRA International:

Thus far, I am not aware of a U.S.-based investigation, but I continue to follow developments closely.

Surely, all of these men were appointed by God. This is the fiction that the Adventist church chooses to believe in respect of its appointed leaders. Not to different to the infallibility of the pope.

Ethics is an area that I suspect is not well understood by the church generally. Different philosophies of ethics exist. Switched on professions require regular it’s members to regularly engage with ethics programmes.

Surely, all of these men were appointed by God. This is the fiction that the Adventist church chooses to believe in respect of its appointed leaders. Not to different to the infallibility of the pope.

The SDA church has only been around for 150 years (I have said this once before) and there are enough scandals and injustices to probably fill a few cardboard boxes with A4 sheets of paper - typed on both sides - as well as a book or two. Give the SDA church approximately 1,500 years or so and one would not recognise it as any different to the Catholic Church - namely that there are good and bad eggs in most churches - and I suppose we could extend that to most religions as well.

We live in a post-modern society where we are beginning to ferret out the contradictions in most grand narratives. Sadly there are infallible ‘popes’ in most churches - that is, if one takes the time to listen to/deconstruct what is sometimes spoken from some pulpits - whether Protestant or Catholic.

Aside from applying that brief account of Jesus’ deeply emotive reaction to Lazarus’ death I/we could apply it to or own times as well ! Quite aside from the horror stories which emanate from all hues of the religious spectrum there have been some incredibly devout Christians in both the SDA and the Catholic church (popes included!), once again, quite aside from the devout of other faiths . . .

(posted by a Catholic, formerly an SDA)