Compliance or Conscience? Charting Our Discord about Ordaining Women 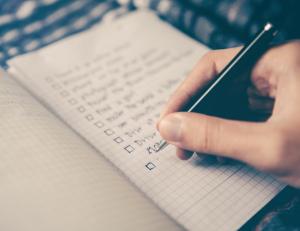 Although we often say that we can understand in two ways the discord regarding the ordination of women that exists among those of us who are Seventh-day Adventists, we rarely go beyond identifying them as issues of either compliance or conscience. Here is one attempt to move further in the direction of increasing clarity:

Those Who Ordain Women Compliance: Disobedient and Rebellious Conscience: Being True to Duty

This list is a start which others will hopefully improve! Add your thoughts in the comments below.

David Larson has specialized in ethics and theology in the School of Religion at Loma Linda University Health for forty-four years; however, his views do not express the convictions of all of its 20,000 or so administrators, faculty, clinicians, and staff.

Photo by Glenn Carstens-Peters on Unsplash.

I’m sorry, but it seems we have too much time our hands, dissecting this issue to death. THIS CAN’T BE EXPLAINED. WO is not a rational issue. It’s all about feelings looking for validation. The “anti’s” are desperate to find some proof they’re anti ordination feelings are somehow biblical; and the “pro’s” are trying to argue from logic and come up against ignorance hiding behind calls for loyalty - TO WHAT? You can;t have a rational debate about FEELINGS.

I quoted this one as an example of the character of this list.

Now lets see, if this were a survey, which words would be the ones chosen, Coercion or persuasion as positive vs negative?

The bias is so evident that such survey would be thrown out immediately.

Now the writers of this article might see these all as true descriptions. But in fact they are just rigid, close minded opinions, showing the feelings of the writers more than any real analysis of the situation…

Do WO advocates just want their views accepted as legitimate? That any deviation form theirs is immoral? There are plenty of folk that feel that this is not a moral issue at all, but a cultural one, Jackson being such an individual.

As sola scriptura how can you? If the Pope/Catholics changed the Bible and they did! Would the Church not have to do the same? Stick to every word of the Bible because as it says not one word not even a tittle can be changed! Going to be “UNPOPULAR”? With whom the world? Lose some members? Narrow is the road to life wide is the road to death! Far too many denominations and pastors are trying to be cool, mega churches, tickling ears etc… Is that what we really want???

Fairness in procedure
Compliance: Win at all costs
Conscience: The ends do not justify the means

Trust in the Holy Spirit’s leading
Compliance: Little
Conscience: Much

Trust in the Holy Spirit’s leading

Yes, it is clear to all that the Holy Spirit is on the side of WO. Ah, except, maybe a large group to which that is not so clear.

You see, you put off the other side by claiming that you are the only ones led by the Spirit. Do you really think that there are not Spirit filled folk on the other side? All followers of Satan?

Less of this would be better.

And the Devil is laughing all the way to the “bank” while we pander to those who say, “I don’t care what the Bible says about gender or authority, I have a calling. I will exercise MY calling the way I want. And I will have MY way.” But to those I want to influence, I will play the wounded martyr.

If you look up the account in the SOP, that’s how the Devil did it is heaven.

“I don’t care what the Bible says about gender or authority, I have a calling. I will exercise MY calling the way I want. And I will have MY way.”

With respect I ask if you could kindly provide support and documentation for your quote? Who has expressed this? Are you acquainted personally with a female called to spiritual leadership?

None whom I am acquainted with have that attitude. They are servants, humble, and this quality has contributed to their Christ-like ministry.

This appears to be your assumption, but certainly you may have documentation that would support your allegation and claim.

Not sure what you mean in this context. My point is, since there is no biblical “right or wrong” on this issue, it comes down to interpretation (read, feelings). There can’t be a rational discussion.

OK. I take your point about this one and probably the very last one. Yet I’m not certain how anyone could make the same criticisms of the others. For instance, I think it is the case that those who emphasize compliance see those who ordain women as disobedient whereas those who emphasize conscience see them as being true to duty,

First Baptist Church could lose voting rights over the matter at next week's Tennessee Baptist Convention.


As a worldwide church responds to human needs gender equality means that the rights of men and women are respected. It means giving men and women the opportunities to reach their full potential in service to God. This is critical not only for attaining gender equality, but also for meeting a wide range of international development goals. Empowered women and girls contribute to the health and productivity of their families, communities, and countries, creating a ripple effect that benefits everyone. Gender equality is a human right, but our world faces a persistent gap in access to opportunities and decision-making power for women and men. Globally, women have fewer opportunities for economic participation than men, less access to basic and higher education, greater health and safety risks, and less political representation. We need to end gender discrimination in our ministry now.
6 Likes
DogTail (DENNIS HOFER) March 28, 2018, 1:41pm #16

I wonder how many male ordained SDA pastors would still oppose women’s ordination if their paycheck and benefits were provided for from OUTSIDE of the GC machine ?
Fear is an overwhelming force for ‘compliance’ at the expense of ‘conscience’.
But fear can also move one far beyond the limits of either.

In Fall 2016 I was away from home, working in Minnesota just northwest of Minneapolis. For several weeks I tried to find the local SDA church as it was advertised on the web and on ‘Adopt-A-Highway’ signs on the edges of the small town I was staying in. Finally, my wife contacted the Minnesota conference to learn that the congregation had moved to another town.

The second Sabbath I visited this tiny congregation I heard an obviously-popular, local lay-evangelist preach that ‘fear’ of God – being afraid of God – is useful in order to motivate us to obey Him. . . I got a tickle in my throat, stepped outside to cough, and soon decided to keep right on moving to my car and out of the parking lot to get far away from that surreal ‘SDA’ ‘worship service’. Without ‘faith’ – affectionate, ‘fear-less’ fidelity – it is impossible to please God, while James said, ‘devils believe, and tremble’.
SDA ‘devils’ ?

Well, in summer 2017, I was back in Minnesota, working just up the interstate from that same tiny church, and visiting another, larger SDA congregation on Sabbaths. Meanwhile, at home in Michigan a local SDA church elder had been ‘dismembered’ for publicly preaching against the ‘Trinity’ mentioned in the ‘28 Fundamental Doctrines’. So, in an email to the pastor of that other Minnesota SDA congregation I mentioned the tragedy back home, telling him that if the ‘28’ looked like a creed, and had actually been referred to and used like a creed, to ‘dismember’ an SDA elder, then they were in fact, a creed !

The last time I visited that SDA church, the pastor responded to my former accusation of ‘creed’, against the ‘28’, from the ‘pulpit’, telling the ‘pews’ that they are, “. . . a picture of Jesus.” ? !

Within the fleshy, finite, human body of Jesus was enshrined all the fullness of the infinite ‘Godhead’. The ‘Ten Commandments’ are a comprehensive transcript of the characters of Those included in the ‘Godhead’, and are not to be added to, nor subtracted from. However the ways in which that infinite Godhead may choose to express those 10 principles in action, cannot possibly be limited to merely 10 ways, 28 ways, or a static ‘icon’ of Jesus.

Who among ‘His own’, who rejected Him, would have guessed that Jesus would not only NOT condemn Mary of Magdala for adultery, but that he would heal her, and join in with her, to become one of only 2 individuals mentioned by name in the New Testament – Mary and God-in- Christ – who would stoop to wash dirty (male) feet. . . as a bold, fearless, active, and overt ‘yes’-expression of the covert principles to be found within the ‘10’ which are mostly expressed as shrinking, fearsome ‘thou shalt nots’ ? Jesus was truly a moving ‘picture of the law’, in fearless, yes-action – “Thou shalt yes ! . . . and yes ! . . . and yes ! . . . .”

Today, the teenage survivors of the Parkland school shootings who are begging – ‘yessing’ – for gun control – in the absence of ‘self-controls’ – are being called ‘Nazis’ by those who are fearful of losing the power of controlling society through fearful gun violence and irresistible gun profits. This ‘Nazi’ name-calling is a fearful exaggeration that exceeds mere compliance with reasonable minds or with the friendlier scale of the mere conscience of kind hearts. But, I saw this unreasonable twisted-conscientious behavior FIRST, coming from a GC-‘compliant’, ‘conscientious’, ordained male SDA pastor, who was willing to lead his congregation into idolatry in order to maintain control over them through the ‘28’, and conference control over himself by the same ‘28’, thereby securing his ‘pastor’ status, employment, and benefits. . . and it turns out that the lay evangelist I ran into the previous fall and that male ordained SDA pastor are closely and happily acquainted.
(Any surprise ?)

Opponents of women’s ordination freely admit that they do not trust the Holy Spirit’s leading. They argue that Christians are prone to self-deception and that the only safe course is to follow the Bible,

First, let me say that that accusation is blatantly false. I have NEVER heard one person who is anti-WO state they do not trust the HS leading. As a matter of fact, it is the HS leading to makes the second half of that statement a possibility. The Bible is understood through the working of the HS. Be cautious of bearing false witness for an agenda.

So you are relying on the HS without the Bible? So, without Scriptural guidance, how can you be sure the Spirit you are following is holy? Amazing you are now the voice for the HS and the sole determiner of who is following His leading and who is not.

It is wrong to deny competence, commitment, onthebasis of gender.

Yes, it is wrong. But it is also wrong to assume competence and commitment on the basis of gender.

I think you misunderstand me, too. There is a clear difference in psychology between the two groups. Proponents of women’s ordination are comfortable identifying the fruit of ordained women ministers as that of the Holy Spirit. In contrast, opponents of women’s ordination feel constrained by their erroneous biblical interpretations to perceive that such fruit is not of the Holy Spirit but part of a satanic deception.

So true. It was men who fell for Davenport, some in very high places.

The UNITED METHODIST CHURCH has been ordaining their women pastors since 1956. The Episcopalians since 1976.

Our failure to deal with this basic issue of fairness and egalitarianism, makes us appear obsolete, antiquated, behind the times, and definitely
miserably misogynistic.

How can we attract new female converts, when our denomination policies are so woefully anti women ??