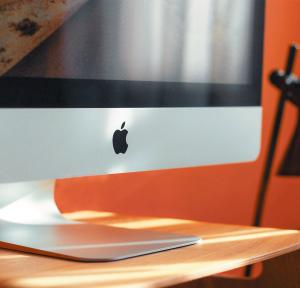 The history of the early church recounts and weaves into its narrative stories of sustained and extraordinary church growth. In fact, the first part of Acts 6:1 affirms this, “now at this time while the disciples were increasing in number.”

It is in this context that a complaint is brought to them that there is a disparity in the support given to the Hellenistic widows by the Hebraic Jews. Notice what happens next. “The Twelve,” who were called into ministry by Jesus, now demonstrate that they are ready not only for church growth and success but also for conflict and challenges.

Observe the actions that they take:

So the twelve summoned the congregation of the disciples and said, “It is not desirable for us to neglect the word of God in order to serve tables. Therefore, brethren, select from among you seven men of good reputation, full of the Spirit and of wisdom, whom we may put in charge of this task. But we will devote ourselves to prayer and to the ministry of the word.” (NASB)

Let’s pause and observe this moment in the story more closely.

Within the advertising and marketing realm it is important to position oneself within an entity or business in a way where one develops one’s own brand. That is, what your company or business will be known for and associated with. For example, UPS, the parcel delivery service, has adopted the Pullman brown color for its delivery trucks and employee uniforms and asks, “What can brown do for you?” The brand that is recognizable worldwide is Apple and its icon, for its computers and everything “i.” Apple’s first logo was “think different.”

Contributing to the making of the branding are the business or company’s core values. Core values are the things that you deeply care about. They are essentially what you want people to know about you. Core values are also about what is important to you that people recognize about you. Therefore, core values set the framework for the brand.

Consequently, a brand becomes what people will actually experience when they interact with your brand. Thereby, notice the importance of consistency and integrity for the brand. The business or company needs to actually be who they say they are, and do what they say they are going to do (for example, deliver packages on time). In terms of brands, actions speak louder than words and if you don’t do what your brand stands for, your reputation will go ahead of you.

Notice the positioning of core values and branding that “The Twelve” introduce in bringing about a solution to the conflict and problem brought to them. First, they bring together “the congregation of disciples” (by the way this is the first time that the word disciple is being used for the church fellowship. Remember, this was initially their designation, The Twelve Disciples.) As a result, all the believers are going to take part in solving the problem.

First, The Twelve articulate three ‘core values’ for themselves. The first, “It is not desirable for us to neglect the word of God in order to serve tables.” Followed by, “but we will devote ourselves to prayer and to the ministry of the word.” The text does not imply that The Twelve looked at waiting on tables as an inferior form of ministry but rather that they know that they were called specifically to the ministry of teaching and preaching. Therefore, their three core values are prioritizing their specific call, prayer, and the ministry of the word.

This new administrative structure with its distinctive core values “found approval with the whole congregation; and they chose Stephen, a man full of faith and of the Holy Spirit, and Philip, Prochorus, Nicanor, Timon, Parmenas, and Nicolas, a proselyte from Antioch.And these they brought before the apostles; and after praying, they laid their hands on them.” The result? “The word of God kept on spreading; and the number of the disciples continued to increase greatly in Jerusalem, and a great many of the priests were becoming obedient to the faith.”

Given the dynamics of branding, it can be said that The Twelve positioned the church as a brand with a framework of core values for its leadership, therefore communicating to the world at large what the church wants to be known for and what people will experience when they interact with the brand. This would always be predicated upon the integrity and consistency of always choosing its leadership with the same core values of prioritizing prayer and the ministry of the Word, “a good reputation, full of the Spirit and wisdom.” Utilized in this manner, core values may serve as a compass to help make decisions when unexpected circumstances, challenges, and difficulties encounter church leadership. It is at this point in the Acts 6 story that deadly challenges arise.

Acts 6:8 focuses on Stephen, “full of grace and power” who “was performing great wonders and signs among the people” who at this point in the Acts account is challenged by “men from what was called the Synagogue of the Freedmen”. It is a dangerous confrontation between two opposing ‘brands and core values.’ Stephen is very familiar with the core values of Judaism and its symbols of what it meant to be God’s people. Core was the temple, itself, Torah, what they considered as holy land and was focused on the location of the temple and Jerusalem.

The tactics and actions that this opposing brand of Judaism and its leadership employs in confrontation to Stephen cannot be missed. Inducing others to openly lie, slander, false witnesses and stirring mob violence. In the midst of this, Luke notes, “and fixing their gaze on him, all who were sitting in the Council saw his face like the face of an angel.” And, “the high priest said, “Are these things so?”

Stephen, a man of “good reputation, full of the Spirit and of wisdom,” responding to the high priest re-tells the history of Israel and tactically unravels their theological misunderstanding with three major themes. God’s activity is not confined to a geographical location. Worship is not limited to the Jerusalem temple and the history of the Jews reveals that they have constantly rejected God’s spokesmen.

The stoning and last prayer of Stephen that his enemies be forgiven, reveal the stance of a true disciple that lives a life journey of ‘come and see’ Jesus that grows into the posture of ‘come and die’ for Jesus. The significance and consequence of Stephen’s core values faithfully represented his brand, the church and Jesus Christ.

Why not take a few minutes and write out your own personal core values? What do you deeply care about? What do you want people to know about you? What does your personal brand say about you?

Be ready for unforeseen challenges.

After all, who in the ordinary way is likely to injure you for being enthusiastic for good? And if it should happen that you suffer “for righteousness’ sake,” that is a privilege. You need neither fear their threats nor worry about them; simply concentrate on being completely devoted to Christ in your hearts. Be ready at any time to give a quiet and reverent answer to any man who wants a reason for the hope that you have within you. Make sure that your conscience is perfectly clear, so that if men should speak slanderously of you as rogues they may come to feel ashamed of themselves for libeling your good Christian behavior. (1 Peter 3:15,16, Phillips).

Adventist propose that the Sabbath is their core value, signifying the worship of the Creator. Most of the Christain Church beg to differ saying in effect that the resurrection is the greater gift to man. Adventists propose that that difference will become the final test for mankind. In fact the change was due to a separation of Christians from Hebrew rites. The problem that a real student of Christsinity faces is that both sides carry so much extra baggage how does one make an honest choice? Thus the question comes can one rest on the seventh day and engage in public worship on the first day? The 40 hour work week makes that a possibility. At 93 and seriously limited the choice is easy. Corporatate worship at anytime is a near impossibility. But in Augusta The words from the pulpit of the Presbyterian Church are more Christ like than the local SDA Church. Now the Southern California Conference in the main it is different. Just like housing churching these days bepends largely on localtion, location. Thus for me, Christ is Creator, Redeemer, And Lord of Lords 24/7.

First, The Twelve articulate three ‘core values’ for themselves. The first, “It is not desirable for us to neglect the word of God in order to serve tables.” Followed by, “but we will devote ourselves to prayer and to the ministry of the word.” The text does not imply that The Twelve looked at waiting on tables as an inferior form of ministry but rather that they know that they were called specifically to the ministry of teaching and preaching. Therefore, their three core values are prioritizing their specific call, prayer, and the ministry of the word.

The SDA brand is featured prominently in its name. But I thought I might decipher what subliminal message one may receive if one were to read its 28 fundamental beliefs. I stripped the text of all headings and biblical footnote references, leaving only the plain content, created a word cloud, and the following image was the result. 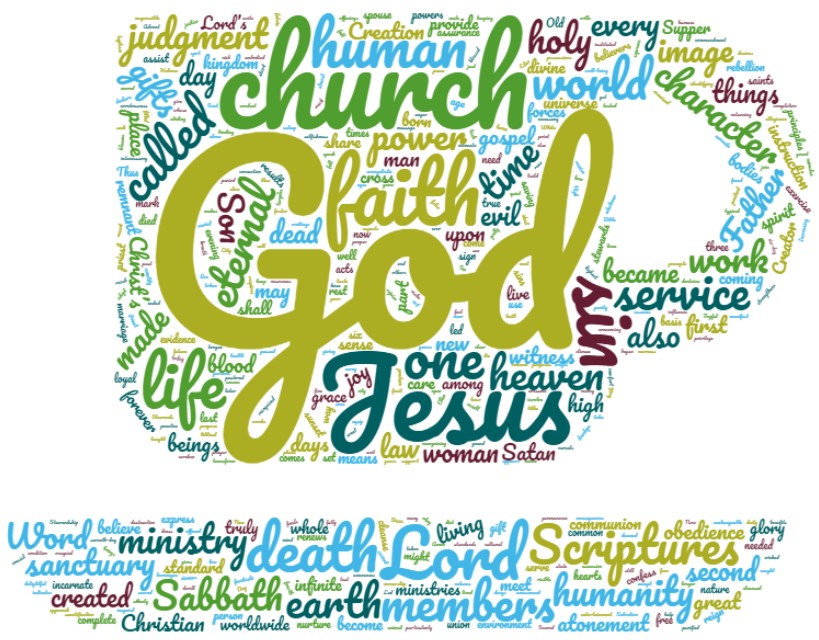 As you can see, God, Jesus, Church, faith, scriptures would impact the reader more than even the sabbath or judgment, vegetarianism or Ellen White. It goes against the popular conception often shared and repeated by those who speak of the denomination.

I wonder why it is failing to define itself in the way that it clearly wants to be seen.

Interesting that the Spirit, and his empowering presence, is nowhere to be found in your montage. Not criticizing you… just an observation of our belief system, even boiled down.

The key message is Judgment. was Grace lost or does it not appear.?

What a creative way to do theology, @JamesPeterson, or at least to describe it. Indeed, it may be an indication of both - what we have and what we lack. And ultimately each believer is to decide… is this my cup of tea?