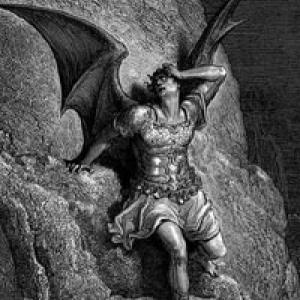 The ancient worldview held that there were many gods, some good, some bad, and many between.

Monotheism as introduced by the Israelite nation stood in contrast to this pantheon of gods. But monotheism had a problem. If there is only one god from whence comes evil? According to the Hebrew Scriptures, this supreme deity accepted responsibility: “The Lord forms both light and darkness, he makes peace and he creates evil” (Isa. 45:7 KJV).

Admittedly, there were villains in the Old Testament. The mythical creatures of Leviathan, Rahab, the Dragon, and twisting Serpent are all pitted against the people of God. Messengers sent from God took care of the dirty work. When God’s anger was kindled against Balaam, a messenger of the Lord took his stand in the road as his adversary (Num. 22). King David, when given a choice of punishment, opted for “three days of the Lord’s messenger destroying throughout the land” (1 Chron. 21:12).

However, the notion of a supernatural being at war with God is only hinted at in the Old Testament. Following the exile, Zechariah was shown a vision of an adversary, or a Satan, standing in the presence of God, accusing Joshua the high priest (Zech. 3:1). The book of Chronicles, also written after the exile, has a Satan standing up against Israel and inciting David to count the people of Israel (1 Chron. 21:1). The final redaction of Job during this period uses the term Satan for the accuser and considers him to be among the heavenly beings (Job 1:6).

Although an adversary of God, called Satan, is mentioned in these passages, the origin of this being is not explained. There is no clearly developed theology of Satan. In fact, there is no mention of angels at all in the Hebrew Scriptures! The term for a heavenly servant of God was mal’ak, a Hebrew word usually rendered messenger. It was only when the Hebrew Scriptures were translated into Greek in the third century B.C. that the word angelos or angel, replaced the term messenger.

The story of evil originating in the mind of an angelic being in primordial times was left to be fleshed out during the intertestamental period. Stories of a cosmic rebellion gained popularity through books known as pseudepigrapha. Readers familiar with the stories in the books of Enoch and Jubiliees would have learned of the fall of a highly regarded angelic being from the heavenly sphere. The angels who sided with him became the daimones who now worked evil throughout humankind.

These intertestamental writers picked up on the poetic references regarding the kings of Babylon and Tyre in Isaiah 14 and Ezekiel 28 to substantiate their narratives regarding the fall. They even wove into their storytelling the Genesis account of these angelic beings, or sons of God, taking wives from the children of men and producing giants, or Nephilim! But the main thrust of their teaching was the continuing battle now taking place on this earth between the forces of good and evil. They saw those who opposed God’s chosen people as being under the direct control of the Devil and his minions. By using these texts, various sectarian groups, like their modern-day counterparts, were quick to demonize their opponents and vilify their positions.

One such group was the Essences. They believed they were in the midst of a war between good and evil, with the Angel of Darkness vying with the Prince of Light. They saw themselves as sons of light pitted against the sons of darkness. As a group, they spoke out against the wickedness of the Roman and Greek worlds, as well as that of the Jewish community and its leaders.

By the time Jesus arrived on the scene, the story of a cosmic struggle between the forces of God and the forces of Satan was well established. According to all four Gospel accounts, Jesus came to usher in the reign of God. In so doing, he must battle with the forces of darkness. Therefore, after his baptism and before beginning his earthly ministry, he withdrew to a solitary place to face the devil in one-on-one combat.

Following this wilderness encounter, Mark records that Jesus returned to Capernaum to teach in the synagogue and immediately was confronted by a man with an unclean spirit, who cried out, “Have you come to destroy us?” (Mark 1:24). By placing this question at the beginning of his Gospel, Mark prefigures the three and one-half years of his earthly ministry where Jesus was in daily conflict with the forces of the demonic.

Having witnessed Satan’s fall from heaven, Jesus could confidently say of Satan, “When he lies, he speaks according to his own nature, for he is a liar and the father of lies.” “He was a murderer from the beginning and has nothing to do with the truth, because there is no truth in him” (John 8:44).

Jesus was not slow to call a spade a spade or to denounce those who misrepresented his Father. In speaking to those who opposed him, Jesus asked, “Why do you not understand what I say? It is because you cannot bear to hear my word. You are of your father the devil, and your will is to do your father’s desires” (John 8:44).

For those concerned about their status before God, Jesus reassured them that he had not come to condemn but to save. Judgment, he taught, is not a time to be feared, but a time to rejoice. It is when the ruler of this world is judged. It is about the Deceiver being unmasked and the Accuser of the Brethren being exposed. It is when the Prince of this world is revealed for the liar he has always been. Judgment, said Jesus, is all about Satan (John 16:11). As for eternal life, that comes by knowing the only true God (John 17:3).1

Prior to his death, Jesus confidently proclaimed that he had finished the work given to him by his Father. He had made God’s very self known to men (John 17:6). He saw his role as making visible the reign of God in human history, revealing the truth about his Father and unmasking the lies of the Devil that had held the world captive.

Many have seen Ellen White’s account of the cosmic struggle as simply a retelling of Milton’s Paradise Lost. But Milton’s account, like that of the pseudepigraphal writers, merely pitted Lucifer and God in a battle between good and evil for the souls of men. White’s unique contribution was to focus on the underlying reasons for the battle.

White picks up on Jesus’ theme of Satan’s lies. She says that Satan sought to invest God with his own evil characteristics. Furthermore, he “led men to conceive of God as a being whose chief attribute is stern justice, one who is a severe judge, a harsh, exacting creditor.”2 Satan represented God as being severe, exacting, revengeful, and arbitrary. Thus, according to White, Jesus’ mission was to remove the dark shadow of misapprehension of God cast by Satan.3

Evil, she maintained, will not be overcome by force. “Compelling power is found only under Satan’s government.God’s government is moral, and truth and love are to be the prevailing power.”4

So we who hold to a Great Controversy model need to start asking the hard questions. Could the issues in this cosmic struggle involve more than merely the merits of good versus evil? Could there really be a question of who has the right to rule the universe? What kind of a being should be trusted to make the rules? Is that being willing to live by his own rules? What will that being do when his back is to the wall and all his support systems are withdrawn? Can a universe really work on a system that places love and truth above force and power?

What was it about the life, death, and resurrection of Christ that answered Satan’s accusations? How did Christ’s death seal Satan’s doom? How did Jesus answer the questions about God in the minds of the inhabitants of the unfallen worlds that secured their loyalty? Was Jesus’ death a blood sacrifice required for forgiveness, or a faithful witness to God’s reaction to evil? Was Jesus’ nonviolent submission to the powers that sought his death a demonstration of how evil is to be met and overcome?

As we study this important topic of the Atonement, let us risk going beyond the traditional explanations, definitions, and answers.

Donna J. Haerich is an elder at the Forest Lake Seventh-day Adventist Church, in Apopka, Florida, and teaches an hour-long Sabbath School class there.

This is a companion discussion topic for the original entry at http://spectrummagazine.org/node/1036