On October 8, 2019, the U.S. Supreme Court will hear oral arguments in two cases involving whether the antidiscrimination provisions of Title VII of the Civil Rights Act of 1964 protect LGBT employees. While state laws may provide localized protection, the question of whether the protection extends nationwide has been raised by two employers who claim they have the right under existing Federal law to discriminate based on sexual orientation and transgender status.

In 2007, the owner of a small funeral home in Michigan who describes himself as a devout Christian hired an individual, Aimee Stephens, who identified as a man. Six years later, Stephens told Rost that Stephens now identified as a woman who wanted to wear women's clothing to work. Rost fired Stephens because Rost believed this "violated God's law."

The EEOC filed suit against Rost, and that 6th Circuit Court of Appeals ruled in favor of Stephens. Rost appealed to the Supreme Court which has agreed to hear the case.

In a related case, the Court ruled in 1989 in Price Waterhouse v. Hopkins that an employer cannot discriminate based on gender dress or behavior stereotypes.

Altitude Express v. Zarda, also up for hearing October 8, addresses whether Title VII prohibits discrimination against gay and lesbian employees. This case involves an employer who fired a skydiving instructor, Donald Zarda. Zarda filed a Title VII lawsuit in federal court arguing that the employer had terminated him because he was gay. The trial court threw the case out on grounds that Title VII does not protect against LGBT discrimination, but the 2nd Circuit Court of Appeals reversed, holding that LGBT discrimination "is a subset of sex discrimination" which is prohibited.

Both cases have attracted extensive briefing on both sides. The employers are arguing that Congress did not specify LGBT rights as part of Title VII and that Congress should act to clarify the law if it desires to do so.

Several faith-based organizations such as churches and educational institutions have expressed concern that enacting Title VII might impact their ability to make employment decisions consistent on their faith. For instance, the Council for Christian Colleges and Universities, et al., argue that outlawing LGBT discrimination under Title VII might affect their access to Title IX funding if they make student housing decisions, enact behavioral requirements, or engage in other activities in a manner consistent with their faith.

Among the dozens of briefs, one of the more problematic arguments for people of faith is that transgender and sexuality are not "immutable characteristics" and therefore not protected under Title VII. This argument, raised in the Liberty Counsel brief, could pose problems for those who seek religious accommodation rights if they change their religion.

Members of the House and Senate have filed an amicus brief arguing that the term "sex" in Title VII is broad enough to encompass both sexual orientation and gender identity. They assert that subsequent legislation is not needed to clarify Title VII but that the attempt to enact the Equality Act of 2019 is intended to clarify the existing statute.

The Court will likely announce its decision in both cases in 2020 during the height of the presidential campaign season.

This article was written by Michael Peabody and originally appeared on the ReligiousLiberty.TV website.

Photo by rawpixel.com from Pexels

This is a companion discussion topic for the original entry at http://spectrummagazine.org/node/9832
1 Like
Andrews President Announces New Edition of the Andrews Study Bible
vandieman (jeremy) August 28, 2019, 2:16pm #2

The Court will likely announce its decision in both cases in 2020 during the height of the presidential campaign season.

these cases will probably be the first real test for some disillusioned trump voters who, despite their far right wing ideology, may be rethinking their choices in 2016…but in the unlikely event that the court actually rules for the defendants, they’ll no doubt hold their noses and vote for trump again in 2020…

This is the exact type case that “Trump voters” are referring to such as the small Colorado cake Baker. Religious liberty! This small business where the owner’s personal religious beliefs are not allowed to be respected.
These type small owners need relief from provoking lawsuits by social activist and government that clearly do “prohibit the free exercise therof.” The burden should be on the plaintiff to go elsewhere. These owners are certainly not putting an overwhelming restraint on society.
@vandieman

Shall be fascinating to see where the court lands. My guess will be that it will find that the term “sex” will be broad enough in Title VII. This is one of the occasions that the Bible does not have a clear and definitive stance on an issue that arrives in a modern age. There will be more issues that make it to the court system via scientific advances and changing cultural mores. Many/most conservative churches will struggle to “adjust”…inevitable.

This is one of the occasions that the Bible does not have a clear and definitive stance on an issue that arrives in a modern age.

an alternative interpretation is that the bible does have a clear and definitive stance, but society is too far gone to care…do you think this is what the apostle john meant when he said, “and the whole world lieth in wickedness”, 1 Jn 5:19…and that was 2,000 yrs ago…

These owners are certainly not putting an overwhelming restraint on society.

do you think these defendants are actually going to win, even with a conservative court…i don’t…

Won’t matter (most likely) in the end about the other alternative “opinion”. The courts will decide- not individuals.

well the courts are part of the “world”, aren’t they…

And “the World” is always wrong or incorrect?

well if it’s lying in “wickedness”, i would think so…

of course we have to recognize that some cultural shifts have been positive…but maybe that’s because satan is playing a pendulum game in order to scoop up the conscientious during a positive swing, just before he plunges us into a truly horrendous one…

So…you have to agree.

There’s nothing entirely positive about the “Christian” groups or world either.

There’s nothing entirely positive about the “Christian” groups or world either.

that’s assuming they actually follow the bible, which of course isn’t the case…look at our church in the case of WO…

It’s not really a problem with Trump or Republican voters, but rather a broader political system that exists to consolidate and normalize a wide range of political opinion and variability under competing narratives of two party system .

People are forced into identifying with X given a less desirable alternative of Y without realizing that they are forced into a false dilemma. Because choosing undesirable X means subsequent justification of that newly-adopted identity.

It’s a very simple trick that works with selling something to a client. Once you give them a wide range of decisons and suggest that they or their liked picked X but that they should likely pick a lesser desirable Y … they will resort to choice of X and defending it as their own, even if it wasn’t their choice to begin with and they could refuse to buy anything.

But, pragmatism forces us to choose the least damaging as we understand it.

In this area of Central Georgia, for years, many businesses had
signs posted – We have the Right to Refuse Service to Anyone.
One current one in town at a night club says, Your wristband does
not guarantee entrance.
No one has ever challenged these.

It is my understanding that the Colorado baker agreed to bake and
decorate what they wanted. BUT would NOT CATER NOR take it
to the wedding site. The Purchaser would have to do that.
Later – other persons went around to OTHER bakers in the area
who said THEY WOULD bake the cake, AND Cater it for the 2 men.
To me, it sounded like a SET UP to begin with.
Most of the REPORTERS made the most of making “fun” of the
bakers Religious Beliefs in the articles they wrote.

It seems to me that at minimum the legislative bill should apply to companies with 50 or more employees.

This is the exact type case that “Trump voters” are referring to such as the small Colorado cake Baker. Religious liberty! This small business where the owner’s personal religious beliefs are not allowed to be respected.

Yea. When I start my bakery, I’ve decided I’m going to refuse service to WASPs who think it’s appropriate to make me deal with their religeous ideas. I’ve decided it’s against my religion to sell cakes to people who won’t follow Jesus’ teachings and example - while claiming to. 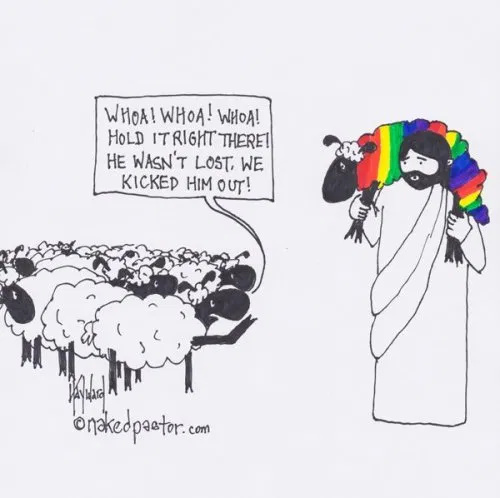 Tim,
It seems to me you are confusing the right to impose your views on others based on behavior or religion and vs. their right to hold their religious with their own business and abilites.
Whose forcing who?
And, how does government make laws that takes away ones 1st amendment rights.
As to one of Jason’s points on his “step closer.” Red, yellow, black and white is a physical condition not a propensity to a behavior. That is the difference between race and behaviors. So it seems to me he blurs what should be obvious as a right…that is race.
@deuce710