This is just a hoax. You are certainly walking back your original claim of major research supporting your theory that Adventist pastors have lower testosterone levels. So, actually, you have no evidence whatsoever, @Danny; pure opinion, isn’t it? Opinion you are wishfully thinking would be so.

Admit it. You have NO evidence. False news.

For my part (and no criticism of you!), I’d like to see the word heresy fall into disuse among Christians, and be labeled archaic in dictionaries.

Since you just posted Chudleigh’s history of the headship theory, I have no regrets calling this belief false and heresy. It is, indeed. Let’s call it what it truly is. No Crusades. No molotov cocktails. Just the truth. Headship is not Biblical. It’s the brainchild of Piper and his cronies to push women out of spiritual leadership and exercising their gifts from the Holy Spirit.

Would you be kind to give us a definition of “wusses?” Is it purely from a testosterone level? I’ve met a number of alpha men who are first to physically abuse their wives and sexually abuse their step children. I frequently ask them why don’t they take their frustration on someone who would fight back physically and they can give no satisfactory answers.

Perhaps a “wuss” is someone who takes advantage of others and knows not how to behave in a civil manner.

Let’s call it what it truly is.

I have absolutely no problem with you calling things as you see them, of course, and we agree in substance, it goes without saying!

I’ve gone with the more neutral term, “moral panic,” as engineered by moral entrepreneurs with a priori agendas, such as Piper and Bacchiocchi, so that I don’t have the baggage of building a whole case of what is, and is not, heresy.

And I can also apply the same reasoning to other similar moral panics, such as the Desmond Ford Moral Panic.

It seems to me that Adventism is prone to moral panics, and I think it might be helpful to analyze this as a category so we can get some perspective on it.

Thanks for the link! I’m also watching Laurel Damsteet on YouTube about Type 2 Spiritualism, and I find her to be a moral entrepreneur par excellence—very skillful at laying the groundwork for a full-blown moral panic.

The Traditional Adventist in me must remain aware to avoid being swept up with her rhetoric.

(And, boy, does she have the credentials, as she was not shy to inform us.)

I could say she is promoting heresy, but that would imply that I sit in a position from which I may judge such things from above, which I don’t find realistic or desirable.

Anyway, however we describe it, people in pressing circumstances are prone to herd behavior, like moral panics, so Adventists are sitting ducks right now, it seems to me.

Headship ideology is a very pervasive cultural wind in Christendom, and Adventism seems to have lost its rudder and broken its mast.

However not being around in the 80’s when things blew up I cant grasp the atmosphere except that I have at times been given occasion to hear audio and talk to presidents and participants in GV.

It seems that you would rather talk about anything than about the question at the top of this page, Danny:

We can talk about wusses and testosterone until the cows come home, but you won’t touch that question, will you?

Is it the one entitled: Women’s Ordination #2 - “The Impact of Spiritualism on Feminism and Gender Issues Today”?

Let me walk that back a bit. That may have been too general…

Thanks, I’ll give this a look-see.

I think I used too strong a term there, but:

She better not have gotten anything wrong.

In any case, trucking with spirits was a “thing” in the mid-nineteenth century, especially for women. It was a new career choice. 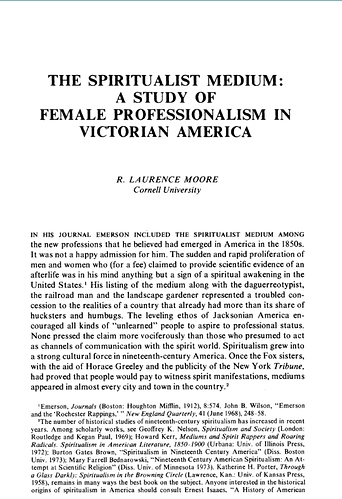 Headship ideology is a very pervasive cultural wind in Christendom, and Adventism seems to have lost its rudder and broken its mast.

For the record, it is “headship” that I have no reservation in calling heresy. Piper’s theology of headship goes well beyond Adventism prohibiting the ordination of women. It prohibits women from directing choirs with boys over 12 or men, teaching S.S. classes with boys over 12, having ANY position in which she leads, guides, or undertakes where a male would be “under” her instruction. His most recent controversial statement is that women should never teach in a seminary.

We will agree to disagree on this.

But I do see this like J. Lee Grady:

The Bible offers women freedom and opportunity, not limitation.

Just remember the camel only has his nose in the tent right now, harrpa!

If it were up to White, women would still be in the nineteenth century, not being able to vote, and a thousand horrors besetting them that you may not be able to imagine as vividly as I can remember them.

As I said to David Larson, This “thing” is on your plate, and you must eat it before it eats you.

You are going to be assimilated by the Borg if you’re not careful.

I prefer to call it misogyny, but I’ll split the change. It will devour you.

Let’s just put it bluntly, to make it impossible to misunderstand the question, Danny:

Are you saying that Gill Ford and Ray Cottrell were lying when they said the instructions were to judge Desmond Ford’s theology by the 27 Fundamental Beliefs rather than the Bible?

I wasnt there so how can I judge what was said? I think what your doing is making a mountain out of a mole-hill.

If they did say it, “word for word” - I dont know of have no way of knowing as those in charge have not been quoted? - it could be just hearsay?

Maybe they did mean “the scriptures” - even blind freddy can see the 27 are based on scripture…does it matter?..are you assigning evil intent to the leaders at GV? I have been part of many nasty church debates and know ho evil intent is apportioned when not warranted.

Maybe what your doing right now Cassie is semantic quibble?

no way of knowing

If it is true that Desmond Ford was judged by the 27 Fundamental Beliefs, rather than Scripture, would you say he received a fair trial?

Sound fair to you?

Would you be kind to give us a definition of “wusses?” Is it purely from a testosterone level? I’ve met a number of alpha men who are first to physically abuse their wives and sexually abuse their step children. I frequently ask them why don’t they take their frustration on someone who would fight back physically and they can give no satisfactory answers.

Lots of questions Elmer…I like to learn as well. I will answer your first one as the rest is subjective. The short answer is basically an emasculated male…if your interested in becoming one then check out this long answer.

This is just a hoax. You are certainly walking back your original claim of major research supporting your theory that Adventist pastors have lower testosterone levels. So, actually, you have no evidence whatsoever, @Danny; pure opinion, isn’t it? Opinion you are wishfully thinking would be so.

Admit it. You have NO evidence. False news.

Such hostility harpa…are you an adventist pastor?

You are making a straw man argument so you can shoot it down…I never said “Adventist Pastors have lower testosterone levels”…I sited data that shows clergy have one of the lowest testosterone levels out of any profession…this of course would include sda pastors but putting words in my mouth like that is unmanly.

It seems that you would rather talk about anything than about the question at the top of this page, Danny:

That is unfair of you Cassie and not very academic of you.

I merely answered someone who was siting the heading as evidence people are leaving the sda church in droves…I debated the point by saying it was males who mainly leave and that they cant abide effeminate environments which is why I think they are leaving…not heavy handed leadership (although this is a problem).

I have said a few words on GV what I know but the Testosterone argument has not largely been fuelled by me…seems many are unsettled by it which is understandable here on Spectrum.

You sound very bitter Cassie…if Spectrum is truly an Adventist based site then language like this should surely be taken note of by the moderators…I am offended by your disdain for EGW and more surprised it is allowed here in such a horrible tone.

this of course would include sda pastors

Certainly jumping to an undocumented or unresearched conclusion.

Remember, SDA’s, according to National Geographic research, outlive the general populations by 7-11 years. Perhaps they are NOT part of your “wusses” assumption. Did you account for other variables? You said your research is “anecdotal.”

Hostility? Not at all. Just demanding rigor in your claims. Your words sound hostile to Adventist ministers around the world. That’s how you are coming across.

And on behalf of the women pastors of Adventism, perhaps testosterone testing is an interesting variable as well.

Danny, you have cited no research-credible or not-to back up your claim.

Did you perchance miss your cypionate injection? Seems a normo-testosterone male would not have any problem backing up his claim. (Ok, so I am merely humorously highlighting your jocularity over leaving the church before your level dropped. Are you a comedian, a stage actor, or a football player, besides once being a pastor? The causes of low testosterone are heritable-was your daddy a pastor too?)

It is one thing to make a claim-whether about theology of Dr Ford, or merely offhandedly and reactively alleging LowT, and another to present a persuasive defense of it. You have done much of one, and none of the other. How about you help us out here, and divulge verifiable sources to back up your claims?

I still have not seen you address the issue of whether Desmond Ford had a fair trial, Danny.

Not one word about that.

About trance channeling, you know very well that I modified that:

I think I used too strong a term there, but:

She was definitely in an altered mental state.

She definitely spoke with spirit beings.

It is what it is.

No one on this planet can prove one way or another how she differed from other people who go into altered states and talk with spirits.

I invite you to try, though. I’ll listen with an open mind.

Sound fair to you?