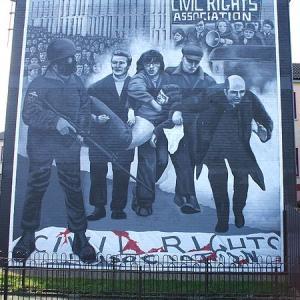 In recent weeks back home in Northern Ireland the news has been dominated by the results of the most expensive and longest running public inquiry in UK history. The Saville Inquiry [1] recently concluded twelve years of investigation into the events of 30th January 1972, which resulted in the deaths of 13 protesters, killed by the British Army. It was an event that many saw as a catalyst in the long running conflict that lay before the communities in Northern Ireland.

I grew up with daily reminders of the tensions that existed between the two communities, Catholic and Protestant, and although you tried to make life as normal as possible you were never quite sure what would happen next or how the day would end. You avoided talking about politics and religion for fear that discussions, even between the best of friends, could become heated. “Stop and search” by the security forces was commonplace—and for us that was normal.

Belfast was a city divided on the grounds of religion and political persuasion and the “interface areas”, where the two communities met, were daily exposed to sectarian violence that not even a 26 foot-high “peace wall” could stop.

After almost 30 years of violence and over 2,500 dead, on the 10th April 1998 all the political parties of Northern Ireland and the governments of the United Kingdom and Ireland signed the Good Friday agreement, which began to see the establishment of a permanent peace on the island. However not until May 2007 did we see things beginning to fall into place in a real and tangible way. I remember very clearly the day when the Reverend Ian Paisley and Martin McGuinness, the leaders of the two largest political parties, shook hands. This symbolic act brought together the bitterest of enemies and marked them taking up their offices in the newly formed assembly; on this occasion a journalist asked, “Why couldn’t they have done it 40 years before?”

It was a question only hindsight could answer and even then bring no comfort to those who had suffered as a consequence of many years of violence.

Thankfully the tensions that we see between the two Christian communities in Rome don’t seem to have resulted in them coming to blows but the consequences are and were equally as terrifying. Paul takes things very seriously when the salvation of souls is at stake!

As you read through the chapters of Romans you can’t help feel some of the tension that Paul is seeking to dissipate. On the one side you have the Judaizers who are trying to hold onto the traditional vestiges of all they have known. And I guess that’s understandable, after all there is no harm in that, is there? It was problem that Paul had faced before and which he deals with in Galatians.

On the other side you have the gentile Christians, no doubt the vast majority of them from a heathen background, and very much accustomed to the very practices that Paul condemns in Romans 1 and 2. Were some of them in danger of falling into their old ways? Or were they simply not taking a stand in condemning practices which Paul saw as abhorrent to the gospel?

These two groups of people, had completely different outlooks on the world, different values, different hopes, aspirations, and different backgrounds. Paul, having faced these divisive issues on his various journeys and in the churches he had planted, also knows that he also has it before him. [2] Paul wants to head the problems off, he wants to bring the two groups together in the spirit of unity that is only found in the gospel, the purpose of which transcends any of the problems that might exist now or in the future. In his closing remarks Paul warns the believers in Rome “to watch out for those who cause divisions and put obstacles in your way that are contrary to the teaching you have learned.” [3]

Right from the start Paul’s purpose in writing this letter is very clear, even if the immediate cause of his writing eludes us. Paul declares early in the epistle: “I am not ashamed of the gospel, because it is the power of God for the salvation of everyone who believes”. [4] This is his vision for the Christian Church, this is his vision for the fledgling Christians in Rome. By placing the gospel before them in a precise and concise manner Paul is seeking to unify them in the grace of Christ.

Paul reminds them of the universal nature of sin: “for all have sinned and fall short of the glory of God”. [5] He reminds them that they are all condemned and that judgement will come to them all, equally. But the flip side is also the universal nature of God’s love: “Is God the God of the Jews only? Is he not the God of the Gentiles too? Yes, of the Gentiles too, since there is only one God”. [6] That Gospel that Paul is not ashamed to proclaim is the power of God to save sinners—and that is us, “while we were still sinners, Christ died for us.” [7]

Over the past 18 months I have been reading the book of Romans over and over again, and I can’t help but think of how different our churches and congregations would be if we, as Adventists, were as much clued into the words of Paul in Romans as we are into the books of Daniel and Revelation. How much more benevolent we would become toward those who see things differently and practice their Christianity in a wholly different way than “I” do.

I know that if the leaders of Northern Ireland had lived out the message of Romans in their lives and politics, we wouldn’t have had a conflict. The futility of the conflict back home was summed up in a message from a German tourist named Jurgen, who wrote on the peace wall: “You all believe in the same God, so listen to Him.” [8] No matter what the cause of division is, nothing matters more than the Gospel of Jesus Christ and its power to change the lives of the people who chose to become His people. Because no matter what, He’s the same God for us all.

NOTES All Bible References are from the New International Version.

This is a companion discussion topic for the original entry at http://spectrummagazine.org/node/2495