The first business meeting of the General Conference Executive Committee at the 2022 Annual Council began Thursday, October 6, with the promise of offering a glimpse into the next three years of Ted Wilson’s tenure. In an afternoon presentation, Wilson articulated a desire to protect the ideological purity of Adventist education, saying that it is “at a crossroads.” That and an extended, multi-departmental feature driven by a committee on the Three Angels’ Messages absorbed a significant part of the day.

Limiting press acess is discouraging. When leaders do things in secret it never turns out well.

When leaders do things in secret it never turns out well.

Thus the state of the Adventist church today.

It is not at all clear that AAA’s membership is in full support of Beardsley’s position on marriage and gender identity issues. Some Adventist accreditors (especially those from peer institutions) seem to appreciate the complexity of this issue and the need to protect the well-being of all our students. Beardsley points the finger at the media and civil legislation. These are not the drivers of the changes that concern her. The lived experiences of our LGBTQ+ students (which are no longer silenced) are creating changes, as they should. Without a course correction, even more students will be harmed. Where Beardsley sees a “sexual-moral” crisis, others of us see a “life-or-death-moral” crisis. I will choose the life of a student any day over Beardsley’s need for supposed sexual-moral “purity.” If she wants to talk about a sexual-moral crisis, let her talk about the majority of Adventist heterosexual college students who have had sex outside of marriage in the last 12 months (yes, we have data on that). Quit pinning fears of a sexual-moral meltdown on the LGBTQ+ kids.

I wish that our denomination could show more transparency. It seems our reactions are fear based we are afraid to allow questions.

I see our church becoming more insignificant. We are bunkering down and not speaking to the broader world at large involving climate change, addressing the various crises facing the United States and the world along with the declining public perception of Christianity as a good in the world.

The decline of Christianity, in general, is upon us.

I saw somewhere that, in the US, it is forecasted to be only about 30 percent of the population’s belief system in less than 40 years. I doubt that Adventism is going to make an increase in those numbers in that time period. They can only pray that Jesus comes before that…

“As some of our schools become so large with so many non-Seventh-day Adventist students, we run the risk of the very character of the school that attracted people, that character can be changed,” he said.

I don’t understand! We spend HOW MUCH $$$ printing paperbacks that land in dumpsters, but when we’re handed the opportunity for real mission work, where people actually pay US to teach them we’re sounding the alarm.

People, at the age we see them as students in our schools, do not pose a threat to the purity of the church. The adventist population has the same social problems, in the same proportions, as the general population. If there ever was an opportunity to make a difference, this is it - at a time when public schools are dropping the “three R’s” and substituting topics and materials that used to be available only in “adult book stores”; and the open border is putting a real strain on community schools.

Instead of a warning to schools to possibly curtail the numbers of non-Adventist students, you should be celebrating and use the time wisely. With this crowd in charge of our government, it won’t be long before these schools may actually get shut down because the requirements to to keep them open are not going to sit well with the current church administration. This is the time we need to put into practice what we have been preaching - Dare to be a Daniel.

The denominational issues i was ever involved in as a principal/teacher, all problems must be solved before brought forward in a public discussion - probably by conference calls.

As Archimedes said, “Give me a lever long enough and a fulcrum on which to place it, and I shall move the world.“

Religions claim to have found such a point in an invisible but nonetheless omniscient god.

The biggest problem with proving that such a god is real is not the invisible part as every human deals with unseen forces, all the time. (Prime examples: gravity, light and mirth.)

The really difficult task is to somehow demonstrate not only the possibility but the actual existence of boundless wisdom to creatures with finite intellect.

Logically, this cannot be done, so rather than address the issue, religion deflects and attempts to elevate belief to a status higher than that of questioning, skepticism and/or rational thought. This to the point where logic is used only to prove that which is already believed and skepticism is directed only toward those who doubt.

The fact that this trick has worked so well for so long, rather than being a confirmation of the validity of this approach, is merely a testament to the overarching power of human credulity, philosophical laziness and intellectual inertia

Was it Barnum or Bailey who said that thing about a plentiful supply of suckers?

So to what percentage of the population will religion ultimately sink?

Based on my admittedly less than scientific estimate of humanity’s desire for growth and change, I figure religion will always find about one in three or four people who are susceptible to its ruse.

I think that you are referring to the purported quote, “A sucker is born every minute.”, which is attributed to P.T. Barnum…

I have no beef with personal religious belief but it must pass the “3 prong approach”,that being, it must be good for/better oneself, the community, and the greater world. In addition, the practice of the belief must inspire awe and wonder.

Short of accomplishing these goals it doesn’t seem have much worth. For my taste, I would eliminate the “goal/fear” of Heaven…and just focus on serving Humankind in the here and now.

There will always be religious belief but it will lessen in Post Modern societies. All one has to do is look at Europe to see the trends. I think the challenge is for any religion to be “relevant” and Adventism right now under TW is becoming more less and less so with its return to a more severe from of Fundamentalism with Last Generation Theology.

It is, by necessity of its current trajectory of beliefs, on a decline…and will remain so. The SDA Church loves to point out its “growth” in Developing Worlds but in the Developed Worlds it is dead in the water and is likely to stay that way. Lack of relevancy and good PR has its price and Adventism is paying it now…arrogance is an awful thing (spiritual or not).

Don’t even get me started about religion’s fervor for finding new converts in developing countries without first acknowledging, much less correcting, its shortcomings in more secular and skeptical societies.

Welcome to the “Soviet Union of SDA Divisions!” The SDA Politburo is in session, Soviet style as we can see in this Spectrum’s report. Closed doors, no Press allowed.

Ah, just for the record, some people call this institution a “Church,” and others have the audacity to call it a “Christian Church.”

I wonder how high are are the feelings soaring at Spectrum offices as its press crew is impacted by a literal, in-vivo "Shut Door"experience. Just look at the face of this Spectrum reporter: 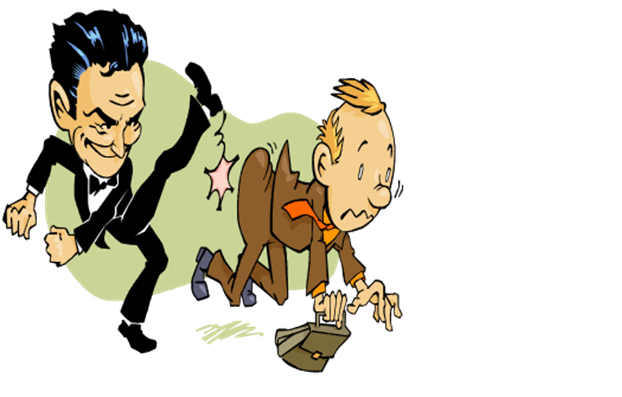 I didn’t know that Abe Lincoln had reincarnated to kick Spectrum’s reporter’s derrière….amazing power Ted has! 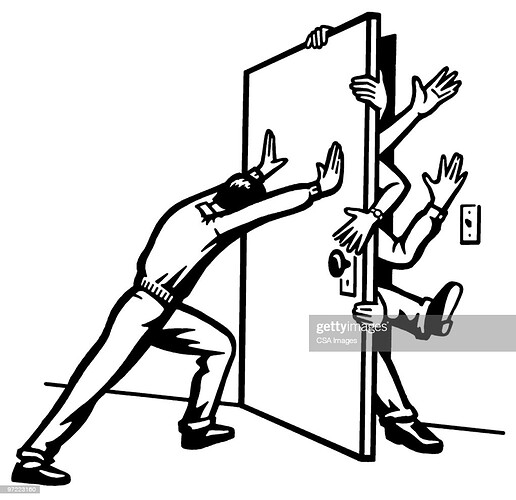 Oh, I wouldn’t dream of encouraging you in that regard.

Besides, the absence of, or even the ability to read or write, isn’t even necessary to become a new SDA convert. All one needs to do is believe and convert to what one is told/taught.

Now, I wouldn’t have such an issue if they were simply taught the story/concept of Jesus, etc., and accepted this. However, adding in Ellen G White and her writings seems to be pushing the envelope accross the desk and into the trash can.

But, in response to “correcting” itself in Developed/Secular societies/worlds….I believe that it cannot because of the Adventist Church’s inadequate apologetics- just my opinion.

Are those actual bodies….or skeletons??

I am not sure. The only think I can guess is that the guy trying to keep the door shut appears to be Williams Costa Jr., the Communications Director. We were schoolmates when I was in college. He was a good friends. I am sad that he is now “part of the deal” of press suppression/suffocation. He is a great musician still, though.

Glad to hear that he still has some redeeming qualities (music).