“…adventism is the light of the world…”

Seriously Jeremy? If so, then how has the world been eliminated so fat by Adventism?

seriously George…Jesus said he is the light of the world, and he also said we’re the light of the world…adventism, more than any other religion, portrays Jesus constantly, not only as god who created earth in six days thousands of yrs ago, or as a man in this world and on the cross 2,000 yrs ago, but where he is and what he’s doing now…can you think of any other religion that focuses on Jesus High Priestly ministry in heaven, first in the HP at his ascension, and now in the MHP since 1844…

look carefully, and you’ll see we’re it…we’re all there is…

I spent some time yesterday reading up on Erton Kohler and messaged a friend down there to find out what he is like. What have you heard about him that is so frightening?

I guess nobody in the GC ran it by their grandkids, ‘cause mine says “TMI” when she’s heard more than she wants to know, as in “Too Much Information!”….

Our church manual warns us that anything that resembles political campaigning we should refrain from.

Someone should tell Ted.

I lived in Brazil for 39 years, and was raised accross the highway of our main educational institution in South America. Spent 16 studying there, including college degree in Theology. I still have a large network of friends down there, and the information I have received for some time is really discouraging. His performance as SAD Prez was not necessarily outstanding. But, since he is TW’s pick anyway, who cares???

Yepp, that’s what they say down there in Brazil…

Let me show you some of those parakeets: 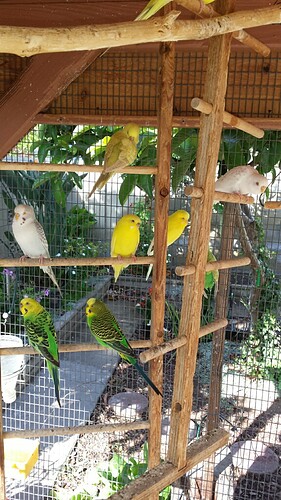 Tim!!! It’s been a while! Great seeing you again.
I guess the memo about campaigning has been lost in the thousands of cracks…

Jeremy! If that what you believe the church should still stand for…then no wonder it is failing. If we don’t portray the active message of Christ, love your neighbor as yourself, then all the rest is fluff!! I never read anywhere that those issue you point out were in the message of Christ while on earth! They mean nothing to hungry person, the person barely getting by, the stranger at the gate, etc, etc, etc, Time to get real and for the .org and members to stop0 their navel gazing!!!1

When I heard Ted Wilson’s inaugural sermon in Atlanta as the newly elected president, I could see the handwriting on the wall: it was his intent to take the church backwards.

That’s the one thing Ted has proven he’s good at. He looks to the past, the “good old days” (which weren’t), as a guide for what he should do in the future. That never works in any organization.

He’s hung his hat on a literal reading of the bible (since it interprets itself, he says) including the creation and flood myths. He offers the logically-vacant idea that a literal six-day creation epoch must be adhered to in order to support the Saturday-Sabbath.

This is despite the facts that the Sabbath was never mentioned in the bible until the Exodus story (which is also myth) and that many modern Jews - to which the Sabbath actually belongs - have no problem at all understanding these stories to be myth while still keeping their Shabbat. It seems it’s just fine to them, and it can be for Adventists as well for the same reasons.

In any case, there is no need to ignore science in favor of an ancient origin story written by an author who thought there was a solid dome - the ‘firmament’ - over a flat earth, in order to decide to observe a Sabbath. But this is something it seems Ted just can’t understand.

Well, I guess TW actually accomplished what he proposed. The Church went back to 1844, and is stuck there for quite a while now.

As much as they’d like to go “but the pioneers!” and have it be true, it’s really not.

Say whatever you want to about their 1844 date setting, they genuinely believed Christ’s return was imminent, not the half-believed “soon, for the last 175 years” today. Given that, they didn’t much care who led out, whether man or woman. Michael Campbell recently pointed out that in the 1910s, there were nearly 1,000 women in SDA leadership. By 1930, it was essentially zero.

The pioneers were also unabashed abolitionists. We all know the hoary Revelation Seminars “America in Prophecy!” view, where America will one day pass a National Sunday Law and act as a beast. They believed America was acting as a beast in their present day, because slavery was so abhorrent to them. Contrast that to the views on virtually any social cause today.

I’d even give a nod to William Miller. (Again, say what you want about his date setting, that’s not my point here.) After 1844, he rejected the shut-door doctrine because he believed God still made grace freely available to all. That sounds a whole lot better than LGT perfectionism to me.

The real drive is to push the church back into 1920s Fundamentalism. But that doesn’t sound nearly as authoritative, so we rewrite history, dress up in 19th Century garb, and call it “the pioneers’ will.”

To me, TMI should have meant that each member would prayerfully determine their role in “saving souls for the kingdom” (whatever THAT means). But, to me, the problem is that someone else wants to “prayerfully” decide what my role should be to reach their predetermined preferred outcome (more baptisms, whether or not those baptized ever become disciples of Christ). It’s so much easier to decide what someone else should do for God than to allow the Holy Spirit to guide each individual.

Why can’t we retain The Young People™? Oh, it must be The World™.

Yep! But not in the way the old-guard leaders think.

In fact, what I see happening with my generation (I’m 55) and more so with my kid’s generation, is that when we finally go out into the world we realize that what is out there is better than what we have received while ensconced with the bubble of the church.

We are taught that we have “the truth”, but we find better truths in the outside world.

We are taught to fear the other, but when we meet the other we find we don’t need to fear them.

Finally, we are taught that we should avoid learning from outside sources because many that are exposed to information that is contrary to church teachings will leave that church. And in that, the church is sort of correct, only they have it backwards. It is actually the church organization that fears that members will leave the church when they are exposed to outside information - because they do! But, instead of admitting the reasons and considering change, they double-down on those very same reasons and the very same fear-mongering.

I am watching the GC session right now. It’s astonishing how Adventists spend time discussing mere technicalities, some of them just nonsensical and nonessential. What serious corporation would do that? It’s completely flawed.

It’s astonishing how Adventists spend time discussing mere technicalities, some of them just nonsensical and nonessential. What serious corporation would do that?

That sounds like the do-nothings in the US Congress. They take every good idea and find some small flaw in it and then refuse to act.

What day do they vote for the GC President?

It’s astonishing how Adventists spend time discussing mere technicalities, some of them just nonsensical and nonessential. What serious corporation would do that?

It’s incredible, isn’t it? And they had 2 extra years to figure out online productivity tools, specifically designed to get these kinds of details ironed out ahead of time.

The least they could do is post a slideshow of all the squirrels they spent time chasing.