Exchanges Down Under Part 7: On God, Guns, and Jingoism 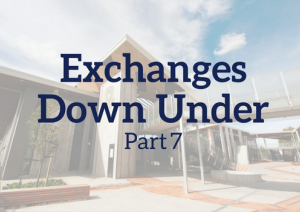 In “Exchanges Down Under,” an ongoing series for Spectrum, Lisa Clark Diller has been sharing her experiences on spending a year away from Southern Adventist University on a professorial exchange with Avondale College. In this guest post, her exchange partner Daniel Reynaud shares his experience thus far in America.

A non-American in the USA can’t help noticing the fact that Americans are proud of their country. Patriotism beams out from private citizens at least as much as from the media and officialdom. It is not unusual to see American flags adorning homes and businesses, on car stickers, and printed on clothing and accessories. And it often isn’t just a single flag: a business may have a dozen or more, or a street may have one on each lamp post – and these are regular, permanent displays, not just put up for a particular national day. Clearly visible as I walk to my office each morning during my exchange year at Southern Adventist University in Tennessee is a giant flagpole bearing an enormous flag. Another of similar dimension flutters just down the road in Collegedale. I often wonder, how many flags does it take, or how big does the flag have to be, in order to prove one’s patriotism?

Americans are also proud of their military. This is a country that honours those who have served in the armed forces. Large billboards feature people who serve in the National Guard, or wounded veterans, while highways and bridges regularly carry the name of specific servicemen and women, or are named after medals or campaigns. In airports, announcements are regularly broadcast advertising the free facilities available to those in the armed forces. Bumper stickers on cars and trucks identify those who have served. National Parks advertise special rates for those in the military.

America is also a place where faith is much more on public display than in my Australian homeland. Again, billboards, bumper stickers, and clothing often carry religious statements, and not just in the Bible Belt where I am based this year.

And, as a gun-loving culture, it is also not unusual for church and guns to be associated. Coming from Australia, where gun ownership is heavily regulated under laws initiated by a conservative government with bi-partisan support, it is rather shocking to walk into the many gun stores and gun shows and see the hundreds of semi-automatic weapons readily available, more so it seems in the Bible Belt than in other parts of the country. A gun-toting, militant, nationalistic Christianity appears to be on show.

I have been struck to see how often Christian, military, and national symbols are conflated. It is not unusual to see flags in American churches. You can buy a crucifix adorned with the American flag at the local Christian book shop. Even Adventist book shops stock special Army, Air Force, Navy, and Marine versions of the Bible. Often it appears that there is little differentiation between being Christian and being American. The country that led the world in separation of church and state now seems to be blurring the differentiation between national and religious identities.

My time in America has sharpened a perception that I have seen occurring in Australian Adventist churches – a growing blend of nationalism and faith. In both countries I have witnessed Adventist services honoring those who have joined the military. America is ahead of Australia in that regard, but there is no doubt that Australia is heading along the same track, and perhaps the church in other countries is following a similar path.

Having grown up French in the aggressively Anglo-Australian society of the 1960s and 70s, I have become adept at taking a flexible approach to national identity. When it suited, I could identify with Australia, but at any point, I could step out of that and become French. The Adventism of my youth reinforced the notion that my national identity came a long way down the list of priorities, with God, family, church, and friends all above it. The international character of the Adventist church was a strong feature, with constant emphasis on the common ties we had with the international Adventist community, regardless of race, culture, or nationality.

Not that I am opposed to having loyalty or feelings of affection for one’s home country. Far from it. I like being Australian; I like being French. But as Adventist Christians, a sense of perspective is called for. Christian nationalism is often based on Old Testament models of God’s identification with Israel. Modern Christian nationalists often apply nationalistic imagery from the Psalms to modern-day contexts. America is noted for two slogans: “In God We Trust” on its currency, and the common phrase “God Bless America.” Other countries have similar sentiments, even if less overtly expressed.

Yet the New Covenant of the New Testament is based on a spiritual Israel, not a political identity. After the cross, God ceased to identify Himself with a specific nation and instead became overtly the God of all true believers. (He always had been, by the way. He only associated Himself with Israel in order to cope with limited human understanding). “My kingdom is not of this world,” Jesus said. So why do we continue to read the old imagery literally, instead of applying their expressions to the Church Invisible?

As an Adventist, I struggle with nationalism as a force. In times of stress, nationalism has a tendency to become crude, to simplify, to demonize. As Voltaire once said, “It is lamentable that, to be a good patriot, one must become the enemy of the rest of mankind.” I personally find it impossible to place my loyalty to my country on any level approaching that of my loyalty to God. When I first met my wife, she was literally stateless, disowned by the Communist country she had escaped from. I loved her answer to the question of her nationality: “I am a citizen of Heaven.” If only more of us thought that way, regardless of the passport we hold.

Adventism has been founded on an opposition to the fusion of church and state. In particular, Adventists were noted for their non-engagement with the military. Ironically, at a time when Desmond Doss’ principled stand against combatant status has been highlighted to the world (by a Catholic film director), Adventists are voluntarily enlisting in the military in ever-greater numbers. How do we envision fulfilling our spiritual mission to the world when we have committed ourselves to obey the political-military agendas of nation-states? Or have we fallen for the lie that these two things are the same? In which case, we may just find ourselves supporting the lamb-like beast of Revelation, fusing religion with political motives in defense of our Western way of life.

Daniel Reynaud is Assistant Dean of Learning and Teaching at Avondale College of Higher Education and is currently enrolled in a year-long faculty exchange program at Southern Adventist University.

I am delighted to see this essay published in Spectrum. It is a very well articulated reflection on an aspect of the American way of life that needs to be exposed and reflected upon. I have for a long time been surprised when I hear my friends reacting negatively to the nationalism of this or that other nation. It is easier to see the straw in someone else’s eye than the beam in one’s own.
I have just returned from a journey on the byways of nostalgia from Argentina and Uruguay. I was surprised to see that in Argentina is happening what is happening in Australia: flags, and enormous flags, are flying everywhere and now are are also on display at the platforms in Adventist churches. The difference between those two countries is that in Argentina the Catholic church is the established church. In Uruguay there is separation of church and state.

Yes, indeed. Christianity is different from Judaism precisely because, as Paul clearly said, the children of Abraham are not those born of the flesh after Abraham, but those who believe God as Abraham believed God, even when the flesh could do nothing to produce children.
By the way, since 1967 I am also a citizen of the United States.

My experience as an American and always living here agrees with your quote " my national identity came a long way down the list of priorities, with God, family, church, and friends all above it. The international character of the Adventist church was a strong feature, with constant emphasis on the common ties we had with the international Adventist community, regardless of race, culture, or nationality."
I joined the church at 17 but grew up reading about other lands and cultures. I chose friends from other nations in college. Thus, I never considered myself a “patriot” as described today. It always seemed to me one could be as free in a European country as here; I couldn’t always understand the “freedom” thing.

But I see something different these days; you may see an overdone patriotism (maybe by some) but I see a moving away from freedom of thought and speech. There is more division than I ever remember and all manner of disrespect and anger targeting the president that goes beyond his brashness. There really is deceptive news reporting and unproven rumors ( i.e.,FBI reports show police shooting of black men is not epidemic). People ignore facts in favor of subjective emotional feelings on both sides. They claim racism much of the time where it doesn’t exist; sexism was used by the female candidate. The more these things are broadcast, they worse they get. The result can be a backlash on either side resulting in destruction of American values of honesty, personal and religious freedom.
(BTW - I am not a gun enthusiast and believe no military/assault weapon should be available to the public. Why do we have police?)
Now we hear the Russians have been stirring Americans up with these sticky issues through on-line media. I heard the questioning of on-line media leaders on C-Span today by government representatives–they don’t lie!

Thanks, Daniel, for putting this into words and for reminding us that we have access to a global identity and one that is shaped by communion that can mitigate the exclusion and violence of nationalism.

Sometimes we forget that there is no prohibition for promoting religion through various means. The prohibition is against establishment of a (particular) religion.