Exchanges Down Under Part 8: Come On, Then 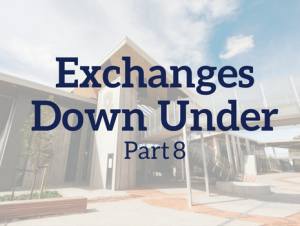 Meditations on what I’m being taught by spending a year away from my family and community on a professorial exchange between Avondale College and Southern Adventist University.

Tucked away in Western Australia is a beautiful reef, the Ningaloo, one of the world’s largest fringing reefs. It has the bonus feature of being walking distance from shore as well as teeming with life. When my husband and I were visiting there a few weeks ago, we heard a young woman encouraging her mother to try out the water with the grandchildren. The grandmother listed a few things she was concerned about; her daughter addressed them; and then when it seemed the older woman just needed a tiny bit more encouragement, her daughter said “Come on, then” in a chirpy emphatic way that did the trick. Off they went together. Hearing that exchange made me realize that I’ve heard that line in many contexts here in Australia. It is part invitation, part encouragement, part provocation—all with a positive lilt in the voice that makes it hard to resist. And in so many ways it encapsulates Australian culture, especially the small portion of it that I’ve experienced here at Avondale. “Come on, then” expresses inclusivity, an energy to do things, a sense of adventure, a bit of teasing and pulling along into the group or activity. It allows for something to be a bit informal and last-minute, and is easily accompanied by the other comforting Australian-isms: “No worries” or “Too easy.”

While I’ve been here, I’ve taken advantage of the library and my colleagues to get lists of Australian books to read, movies or television shows to watch, podcasts to listen to, as well as places to visit in order to “get a sense” of Australian history and culture. This has been a fun exercise. Like all countries, there isn’t just one big culture but many variations and sub-groups, but dipping into books that are assigned to school kids, reading some of their great novels, and tracking the History Wars that inevitably accompany scholarship into the past, has helped me cut a few windows into the mentality of the people around me.

Australia definitely has a joking culture. This is tricky for outsiders, and shouldn’t be attempted lightly. There is great enjoyment in teasing each other, and more things are communicated via humor than in any place that I’ve spent time. It’s a highly honed skill. It’s used to pull people along as well as keep perspective. “Come on, then” and join us in a laugh, so to speak. While it seems that New Australians (this is what they call recent immigrants) might have to learn this part of the culture, some of the scholarship and media I’ve imbibed indicates that humor and joking are also important in Aboriginal communication.

I haven’t been able to spend much time with Aboriginal men and women, but I did get to participate in a workshop that Avondale put on regarding how we can better serve and be blessed by our Torres Straight and Aboriginal neighbors, church members, and students. Australian institutions seem to work hard to make sure that they both value the special nature of the Aboriginal community and understand the fraught character of the relationships between their indigenous people and more recent comers to this continent. One way they do this that has struck me with its simplicity and elegance is through an “Acknowledgement.” This is a statement given at the beginning of meetings or events, in emails or official statements that acknowledges and honors the “traditional owners of the land” and then names the local group that’s connected to the landscape we all occupy.

Because Australia is a nation of immigrants, like the United States. And I have appreciated how much Avondale staff and faculty work to make sure that they are doing the cultural bridging that is required for their students to succeed and to feel valued. I think part of the strength of this commitment is rooted in how many of Avondale’s staff members have spent time living or traveling extensively in other countries. The range of Australian accents includes many other British Empire influences since so many New Zealanders, Brits, and South Africans (among others) come here. While Australia is definitely in Asia and increasingly is oriented that way, it is true that the largest numbers of immigrants are still from those “white” British colonial cultures. But most Australians I know, especially Adventist ones, have spent a great deal of time traveling throughout the Pacific and Southeast Asia, not to mention Europe and the Americas. They are multi-cultural not only because of immigration, but because of their own interest in leaving their island-continent from time to time and working in and visiting the rest of the world. “Come on, then” and visit a new place.

And yet they love the land they live on. A shocking amount of Australia is frontier/pastoral/arid landscape with by far the majority of people living in a very small thread of land, mostly on the east coast. That frontier and pastoral culture from their past spills over into a sense of pride in, ownership of, and knowledge about their flora and fauna and the sporty/camping culture that pervades here. Australians notice the subtle attractions of the desert, as well as the forests and water, and seem to spend much more time outside (albeit with lots of sunscreen!) than we do in the US. I’ve rarely traveled in places where so many of the people gush about how beautiful certain spots in their country are. I’m sure many of us in the States love the beauty around us, but Australians are specific and enthusiastic in their recommendations and descriptions in ways that I’ve rarely experienced. “Come on, then” and come out and play—“footie,” or netball, or the new form of fast-playing cricket, or tennis or swimming, and myriad other sports.

And within the Avondale sub-culture there are traditions and habits that reflect this love of the land and nature, this communal playfulness. Basketball is a huge element on campus. The students love it and being part of a team is a major element in their social life. The commitment to mentoring student leaders and allowing the young people to organize programs and productions from top to bottom is a significant element in the invitation to the next generation to “own” its church and community. The rich creativity and the inclusion of as many as possible in writing, researching, developing organizations for service, and the showing up that the staff and students do for each other in support of this creative work is also an outgrowth of Avondale’s Australian enthusiasm for life. “Come on, then” and get involved.

And the jokes. The teasing goes long and deep and is sustained over time. It is how they express affection for each other and it creates space for the radical equality and self-deprecation which is part of Australia’s national psyche. They even include some of us outsiders in this indulgence in verbal sparring and laughter.

I will miss the crazy birds on this campus: the territorial plovers raising their babies in the lawn in front of the library, and the parrots doing tricks on the electric lines, the insane calls of the kookaburra. I’ll miss the pretty campus with the purple jacarandas all in bloom, the beautiful beaches and the gorgeousness of the light on Lake Macquarie right nearby Avondale. But the natural beauty and resources are nothing to the generosity, imagination, and reliability of the people who have made their home here—their consistent welcome, their sense of adventure, and their desire to mentor the next generation in how to flourish in and bless the world in which they live.

Lisa Clark Diller is Professor of Early Modern History at Southern Adventist University. She is currently enrolled in a year-long faculty exchange program at Avondale College of Higher Education. Learn more about the exchange here.

Come on back Lisa. You’ve been a blessing.

I’m not gone quite yet, Rod–and yes, you know I’ll be back to haunt you whether you like it or not!

I’ve enjoyed the encounters with you, Lisa. As well as your musings. Keep coming back! Or stay here and live. You’re one of us!!

I would take issue with what Lisa describes as cultural sensitivity towards our Aborigines in Australia. Being in and around a left leaning institution she is forgiven for her impressions that most Australians favour the “sorry” line when it comes to what happened to aborigines at settlement. They dont.

The west in particular has a new kind of racial hatred. Fuelled by past injustices, displaced cultures are rising up all over again, against what they see as oppression by white people. This time however, the large majority who favour this line are white people assisting coloured’s in greater numbers than previously seen in history. White and black march shoulder to shoulder protesting that they continue to suffer under ‘white privilege’ and oppression. In Australia white people were made to apologise for something they didn’t personally do to people who didn’t personally suffer the wrongs of the past. Millions of dollars are spent appeasing “oppressed” cultures creating a national divide and a backlash form the opposite side who see the inconsistencies.

EGW described this would happen again when she said:

“As time advances, and race prejudices increase, it will become almost impossible, in many places, for white workers to labor for the colored people. Sometimes the white people who are not in sympathy with our work will unite with colored people to oppose it, claiming that our teaching is an effort to break up churches and bring in trouble over the Sabbath question. White ministers and colored ministers will make false statements, arousing in the minds of the people such a feeling of antagonism that they will be ready to destroy and to kill.
The powers of hell are working with all their ingenuity to prevent the proclamation of the last message of mercy among the colored people. Satan is working to make it most difficult for the gospel minister and teacher to ignore the prejudice that exists between the white and the colored people. Let us follow the course of wisdom. Let us do nothing that will unnecessarily arouse opposition–nothing that will hinder the proclamation of the gospel message” - Maranatha - p. 142.