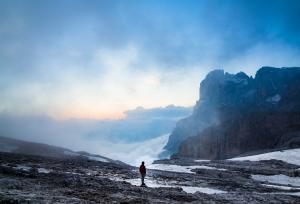 Every human society is an enterprise of world-building. Religion occupies a distinctive place in this enterprise…All socially constructed worlds are inherently precarious. Supported by human activity, they are constantly threatened by the human facts of self-interest and stupidity. — Peter Berger, The Sacred Canopy

Religion gets its knocks these days as the perpetrator of all things evil, the invention of adults who never outgrew their childish fears, the condemner of all that is spontaneous and upgrowing. Some of that is true, and when we who can still remember our childhood conscription into religion somehow find ourselves passing as adults and still floundering gracelessly around in the warm waters of the faith we were baptized into we may be forgiven for our slack-jawed lack of defense. Some practices of religion, like manners and clothes, are a matter of habit. Habits smooth our way and free us up to think about important things, so we may be reluctant to drop those which, so far, have not resulted in serious injury or loss of footing.

But, perhaps, like a man whose waist has outgrown his trousers, our boundaries to religion are too small, too much the skinny jeans rather than the comfort waist regular cut with a smoosh more room in the seat. “Were we to limit our view to it,” says William James in The Varieties of Religious Experience, “we should have to define religion as an external art, the art of winning the favor of the gods.”

Few Christians would admit to that, although their practices might. The institution of religion—its churches, ecclesiastical hierarchies, vestments, holy books, and, of course, the systematic theologies, commentaries, councils, and connections—all of that is the external manifestation of world-building and world-maintenance, as Peter Berger notes in The Sacred Canopy. It’s a way of not only maintaining order in the world, but also, says Berger, “the audacious attempt to conceive of the entire universe as being humanly significant.”

We can’t fault people for organizing a religion: that’s what symbol and ritual lead to, after all. The first person to consciously repeat an action that had projected him into a holy and awesome experience was trying to recapture the moment. And it must have worked on some level or he wouldn’t have passed it on to others. It’s certainly not wrong to long for a repeat of something that moved us deeply, but no experience, however vivid, can fully be duplicated. In fact, the more vivid and detailed the experience the less likely it can be reconstituted.

It’s the generic expressions that translate best over time and culture: the movement of the body in dance and worship, the eating together in fellowship, the common prayer shared amongst a grieving circle, the reading of holy scripture in search of understanding.

All of this is religion, religare, from the Latin for ‘to bind.’ It’s religion that binds us together through these rituals, these attempts to relive an experience of the past. There is nothing wrong with this. But we must realize we are trying to elevate a secondary reflection of someone’s primary experience to a primary experience for ourselves.

What we retain is a reverence for the gesture, the word, the ritual—the ‘finger pointing to the moon,’ instead of the cool radiance of the moon itself. We feel a solidarity with the countless congregations through the centuries, gathered in glades deep in the forest, in huts and homes, in cathedrals and chapels, in temples, mosques, and tents.

We are reenacting a drama, reading from a script that by now is tattered and smudged from a thousand fingers tracing out the lines. The script itself becomes a holy object, passed reverently from hand to hand, as the players rehearse for a show that never ends.

Religion binds us together then, sometimes closer than we want, and sometimes in ways that seem to trap and fetter us. But there is another derivation of the word, this one from Cicero, who suggests that religion is connected to relegare, Latin for ‘to go through’ or ‘over again as in reading, speech or thought.’ Still another rendering is that ‘religion’ is related to the English reck, ‘to heed,’ or ‘to have a care for.’

Religion as an activity that humans engage in is that which they care about, what they perform with care over and again from many different motives and with mixed results, to be sure, but at the very least with the hope that through this they will come into the presence of the divine.

Thus, the external symbols and rituals seek to penetrate to one’s heart.

But the internal response, the deep inwardness that comes when we fall into a reverie waiting for the light to change—that is not to be trifled with nor ignored. “The relation goes direct from heart to heart,” says James, “from soul to soul, between man and his maker.”

This is what we call ‘spirituality,’ the diffuse but real sense of the divine surrounding us. I suspect that part of its appeal to many is the fact that it is non-binding. The binding to the institution of religion, its religare function, may be more than some people can bear. Political evangelicals have already alienated many by their enthusiastic endorsement of Trump and his administration’s actions in recent months. Their explicit support for these policies is a break point for many Christians.

But the power of spirituality lies in its first-order, primary experience with God. That’s what people want, even those who are entrenched in rituals, week after week, that make no sense to them. They want to hunger after God, they want the numinous, the mysterium tremendum et fascinans that lifted Moses and Abraham and Jacob, Jesus, Paul, Martin Luther King, and millions more. They desire meaning and purpose to their lives.

We have these holy moments of beauty; they drift up like dandelion seeds before us and we might not even see them, focused as we are on the flotsam of our days.

There is no inherent reason why spirituality and religion can’t coexist. But it’s clear that religion without spirituality is a valley full of dry bones. And it’s also clear that, as Karen Armstrong says, some people just don’t have the knack for religion.

The capacity for spirituality is encoded in every person. It is not magic nor is it superstition. It is not unreasonable nor does it depend on some secret instruction, a la Gnosticism. It is a capacity for wonder that we begin to lose early in life. It is a way of perceiving the beauty around us, despite what we have done to the natural world. It is a willingness to be released from the bonds that fetter us and narrow our vision. It is a prayer of grace and courage to live in this moment in the presence of Jesus.

We should ask ourselves a simple question: Do we want to see God’s beauty in the world? Then attention must be paid, and spirituality as a practice provides the means.

“Beauty is nothing but the beginning of terror,” says Rilke. “Every angel is terrifying.” A star is waiting to be noticed, a wave rolls toward us from the past, a violin yields to our hearing as we pass under an open window—all these are intimations of God if we are awake. Will we practice noticing?

“All this was mission,” declares Rilke. “But could you accomplish it?” This is what grace gives us: the courage to notice the common mysteries of our lives.

“Truly, we live with mysteries

too marvelous to be understood…

Let me keep my distance, always, from those

who think they have the answers.

Let me keep company, always, with those

who say, “Look!” and laugh in astonishment,

and bow their heads.”

Barry Casey taught religion, philosophy, and communications for 28 years at Columbia Union College, now Washington Adventist University, and business communication at Stevenson University for 7 years. He continues as adjunct professor in ethics and philosophy at Trinity Washington University, D.C. An earlier version of this essay appeared on stilladventist.com. It is reprinted here with permission. More of the author’s writing can be found on his blog, Dante’s Woods.

Rudolf Otto’s concern with experiencing the numinous also gave rise to experimenting with new forms of liturgy designed to give urgency and vividness to such experiences in Protestant services of worship. He employed a “Sacrament of Silence” as a culminating phase, a time of waiting comparable to the Quaker moment of silence, which he acknowledged to have been the stimulus to his own innovation. Simon and Garfunkel speak to this in their ballad “Sounds of Silence”.
ello darkness, my old friend
_ I’ve come to talk with you again
_ Because a vision softly creeping_
_ Left it’s seeds while I was sleeping_
_ And the vision that was planted_
_ In my brain still remains_
_ Within the sound of silence_
In restless dreams I walked alone
_ Narrow streets of cobblestone_
_ 'Neath the halo of a street lamp_
_ I turned my collar to the cold and damp_
_ When my eyes were stabbed by the flash of_
_ A neon light that split the night_
_ And touched the sound of silence._

Otto also warned us about confusing aesthetics and religion when he said:
“But aesthetics is not religion, and the origins of religion lie somewhere completely different. They lie anyway, these roses smell too sweet and the deep roar of the breaking waves is too splendid, to do justice to such weighty matters now” 1996). “Autobiographical and Social Essays”, p.73, by Walter de Gruyter

Otto’s vision has guided me since I first came across a reference to him in one of C. S. Lewis’ books back in college. I find it compelling, but elusive. I take your warning (and his) about confusing aesthetics and religion; the substitution of worship of nature for the worship of God doesn’t do right by either one. But nature can provide us with a perceptual portal to God, as can other forms of art. I’m still working on clarifying the distinctions between religion and spirituality; this essay is a first attempt at that! Much more discussion and work to do. Your comments are helpful, as always. Thanks for the reference to the book by de Gruyter.

Religion binds us together then, sometimes closer than we want, and sometimes in ways that seem to trap and fetter us.

This is so true for no other reason than we share a common relationship we had first with our parents then our siblings, relatives, friends, teachers, mentors and spouses. When in our adulthood we find our parents to be not who we expected or wish, we try to duplicate the early phases of our lives to the set of parents who supplied our needs even before we can articulate them. This is the impetus that spurs us to religion and draws us together. From this point on, what differs is the attitude and approach we apply our wishes to our “Heavenly Father.”