Disclaimer: Contents of these lessons are not intended to be financial advice but is general commentary based on biblical principles. The reader is encouraged to seek competent professional advice which will suit their particular personal situation. With this caveat at the bottom of the first page of the new Adult Bible Study Guide, a 90-day focus on stewardship begins. Happy 2023!

Just one question - why does any of this matter?

It may not matter a lot but this series on current SS lessons does provide a snapshot of current central concerns of Adventism. An understanding of these concerns may be interesting to bloggers here who do not have access (for one reason or another) otherwise. The quarterly’s “buyer beware” warning may not have been sincere, but if it was, I applaud Mr. Goldstein for including it.

I perused the first couple lessons. It seems to be classic prosperity gospel nonsense - “give us your money and you will prosper”; “make a ‘deal’ with God that if you tithe generously He’ll bless you with material prosperity”.

I also noted that the lessons conveniently leave out Deuteronomy 14:26, a verse SDAs like to pretend isn’t in the Bible.

The lessons also gloss over what the meaning of “increase” is, other than introducing the “net vs gross” discussion. They don’t raise the question of what legitimate non-deductible expenses employees have in order to earn income. For example, in Canada employees cannot deduct the cost of their transportation to and from work, nor can they deduct the cost of their work clothes, but these are clear expenses required to earn income - should the tithe payer deduct these costs? And by “increase” does this not mean after one has met basic living expenses - housing, clothing, food, etc.?

Finally, while biblical tithe is expressly for the Levites, to compensate them for having received no land, no explanation is given as to how the local SDA conference office justifies appropriating for itself the Levites’ inheritance, or how the SDA conference is the “storehouse”. Again Deuteronomy 14:26 gives instructions about what to do with tithe when there is no Levite around. But the SDA establishment really doesn’t like this passage of scripture.

There’s also the irony of a guy who’s paid out of tithe telling people it’s a moral obligation to pay them more tithe.

SDA obsession with numbers is historic; but this has more to do with an aging membership.

Who can possibly take this guy seriously?

Stewardship is only in minor about personal finance and LARGELY about how you personally and we as a society care for each other and our planet. This author - and editor and by extension the GC concentrate too much on the “personal” mote and ignore the log.
The “each other” is 2/3 of the scriptures bulk - stewardship that is care for the poor, the hungry, the prisoner, the immigrant, the unclothed, the widow, the orphan; and condemnation for the powerful and wealthy persons and nations - over and over and over. The planet - read the metaphors of Genesis again. Stewardship is social.

This kind of thing absolutely matters. I grew up attending the same church as Ed Reid and I thought the cosmic week idea was pretty solidly part of mainstream SDA conversation and belief in the late 1990s. It contributed strongly to my own belief that the end times were about to begin after the year 2000. Have you all forgotten what that was like? Or maybe my SDA community was just more of a doomsday cult than most? (I grew up in suburban Maryland surrounded by GC employees and church leaders.) I literally thought the world was about to end and that I would be fleeing for my life from the U.S. government. When 9/11 happened, it was strong confirmation of my paranoid fears. As I watched the second tower fall, I literally remember thinking to myself “Whelp, there goes my life. No need to plan for the future now, the end times are starting and nothing else matters.”

Thanks for your contributions to our childhood trauma, Mr. Reid. It’s a lasting, generational kind of legacy. I hope you’re proud.

Reid discredited himself for me back in the mid 1990s when over a couple day “campmeeting”, as the featured speaker, he predicted the second coming of Jesus in either 2000 or 2001, I don’t remember which. He was adamant that based on all his numbers and calculations the world could not possibly go on past that…

I Scoffed at his prediction to honest, and time has shown him to be more than a bit wrong! How is it that someone who has this proclivities theologically, and track record of clearly heretical predictions is allowed to author the quarterly.

Fool me once, shame on you; fool me twice…

I am excited about this quarter’s emphasis on stewardship. I don’t think many of us truly grasp the richness and depth of this topic. A week ago, I started writing The Paradoxes of Christian Stewardship, which I hope you will find interesting:

The Biblical Paradox—The Bible teaches that we should remit tithes and offerings to God but also teaches that everything we possess belongs to God.
The Cheerful Giver Paradox—The Bible teaches that the giver should be altruistic and motivated by love but also promises the giver that he or she will receive blessings poured down through the open windows of heaven along with treasure to enjoy in the afterlife.
The Tithe Paradox—The SDA Church professes a calling to alleviate the suffering of the poor but is funded principally by tithe, a regressive tax that disproportionately burdens the poor.
The Hermeneutical Paradox—SDAs interpret the Bible according to the Protestant principle of sensus literalis but allegorize certain hard teachings of Jesus regarding money (rich man going through the eye of the needle, sell all you have and give to the poor) to make His words more palatable and tolerable.
The Doctrinal Paradox—Church policy states that a member of the SDA Church “shall” be subject to discipline for "denial of faith…in the fundamental beliefs of the Church,” but an exception with respect to Fundamental Belief No. 21 is made that prohibits church discipline for failure to financially support the Church.
The Ecclesiastical Paradox—SDAs model their ecclesiology on NT church ecclesiastical practices but do not promote or attempt to achieve economic solidarity, which existed in NT churches that held everything in common.
The Christian Steward Paradox—The Bible teaches that we are to meditate on whatever is true, noble, just, pure, lovely, of good report, virtuous, and praiseworthy, but the attentive and faithful Christian steward thinks about money, the love of which is the root of all evil, most of the time.
The Vow of Poverty Paradox—The Bible teaches that stewardship duties are as onerous for the poor, who superintend very little, as for the rich, who superintend much, because increasing minas and talents is a stewardship duty of everyone.
The Spiritual Gifts Paradox—Very few SDAs are spiritually gifted regarding money and finance but most in our faith community speak, act, and administer as if they were.
The Human Sciences Paradox—An understanding of the “Dismal Science” of economics is requisite to becoming an attentive and faithful steward. Theology, insufficient in itself, points to economics as a human science that should be studied and learned.
The Teaching Paradox—The vast SDA Church literature about stewardship, including the Sabbath School Lessons we are currently studying, largely neglects to address stewardship duties that arise after the money has been placed in the collection plate.
The Two Models Paradox—Local church, conference, union, division, and GC finance is generally based on a taxation model involving tithes and offerings, whereas finance for other SDA entities is largely based on a philanthropy model.
The Balance Sheet Paradox—In matters of finance, SDAs focus inordinately on the left column of the balance sheet while ignoring the right column, because cutting costs, eliminating programs, and shuttering doors takes much less effort than achieving growth.
The Apologetics Paradox—SDA Church teachings on stewardship have been and always will be in furtherance of what are perceived to be the Church’s economic best interests.

Reid discredited himself for me back in the mid 1990s when over a couple day “campmeeting”, as the featured speaker, he predicted the second coming of Jesus in either 2000 or 2001, I don’t remember which. He was adamant that based on all his numbers and calculations the world could not possibly go on past that…

How long are we going to put up with these people who prophetically claim to know when the end of the world will be. First: we are not supposed to know the day and the hour…but yet, many including this guy, who by the way I have never heard of, thinks that then it is fair game to predict the year. NO IT ISN"T. It was a metaphorical message to stop this kind of predictive process.

There was a billboard on La Cienega Blvd just off Sunset near my office that had some lunatic predicting the date of the end of the world and then when that day came and went, they changed the date on the billboard. I guess people finally stopped paying for the billboard when this wacko kept getting it wrong. All we do is make our beliefs a laughingstock to the rest of the world when we do these things. This guy obviously has no credibility.

If this is direction, it seems that someone like Walter Veith will be the next person in line to author the SS lessons.

I have a Teachers’ quarterly and am not finding the disclaimer Mr. Carpenter references…can anyone direct me to it, or is it only shown in the regular Adult quarterly?

The Spiritual Gifts Paradox—Very few SDAs are spiritually gifted regarding money and finance but most in our faith community speak, act, and administer as if they were.

This is spot on! Non-compliance with core financial policies across the board. Does anybody care? 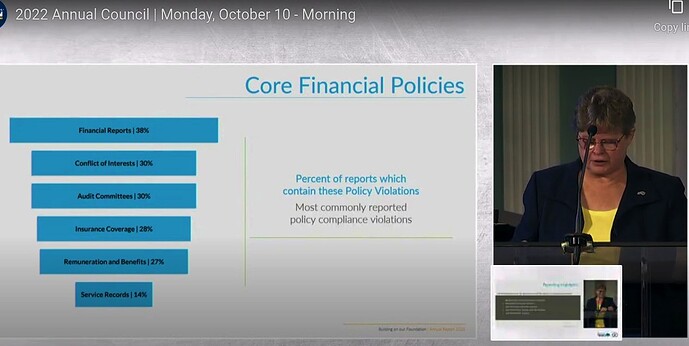 The NT church post resurrection gives no evidence of continuing tithing, which was tied solely to the temple system and the gathering of produce into the temple storehouse for the support of the Levitical priesthood. Rather, Paul spoke of believers giving out of the purpose of their hearts in gratitude for God’s indescribable gift. Acts reveals the church giving vouluntarily to care for one another and for the poor. Those who preached the gospel were entitled to be supported from what was collected, even though Paul himself did not avail himself of such, but there is no record of tithe being imposed. Another example today of trying to impose law to get people to behave uniformly, rather than leaving people to live the freedom of responding to the gospel.

The Adult SS Quarterly under the direction of Mr. Goldstein employs a conspiracy theorist, prosperity preaching type hack to author an apology for tithing…with no regard for what the NT and change of covenants reveals. Money talks!

I couldn’t find in the Adult quarterly either.

Curious…thanks for your response. Perhaps Mr. Carpenter can shed some light?

You’re right, as usual, Frank. I just don’t know how it can get any worse.

I can’t find this in a quarterly. Where is it? Disclaimer: Contents of these lessons are not intended to be financial advice but is general commentary based on biblical principles. The reader is encouraged to seek competent professional advice which will suit their particular personal situation. With this caveat at the bottom of the first page of the new Adult Bible Study Guide, a 90-day focus on stewardship begins.

I had the same issue. I cannot find it in the regular printed quarterly but it is present as quoted at the bottom of the first page (screen, window) of the online version. Have no idea why it is on line but not in print editions.