Genesis from a Woman’s Perspective

The book, The Dictionary of Lost Words[1] is a novel written by Australian author Pip Williams. While based on the real event of compiling the Oxford University Press’s New English Dictionary[2]² (now the Oxford English Dictionary), it is a novel focused on the fictional character Esme Nicoll. She is the motherless daughter of Harry, a lexicographer working on the dictionary. From six years of age, when she picked up a slip of paper that had fallen on the floor at her father’s workplace, Esme secretly and gradually collected a trunkful of words that had either been discarded by the lexicographers or were used by female stall holders in the Oxford Covered Market. The collected words related to women and Esme recorded the meanings for each. In the story, these words were published in a book titled Women’s Words and Their Meanings. Esme’s objective was to ensure that these words, discarded by men but important to women, were not lost. She believed the words and their meanings were significant because they revealed the narrative of women that was often not present in the writings of men.

Maybe this will help. It may just be more accurate than the original, given that we all came from Africa and whiteness is a genetic anomaly spawned in the dark northern reaches of Europe: 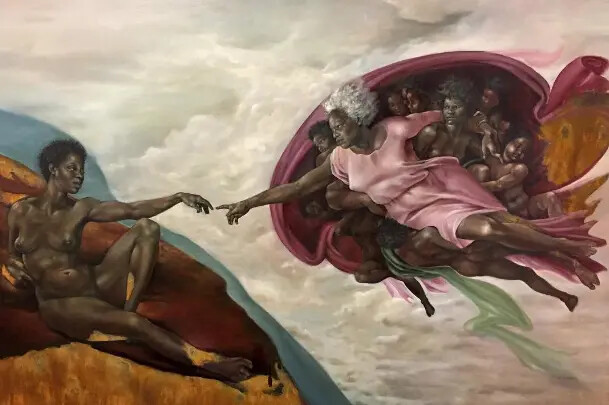 You can see many of her other powerful works here.

May I instantly add a peronal experiencer? -, , An old Jewish lady, of Chassidish family, a lifetime married to a Seraphish husband, , with the marks of earaly KZ experience - a tatooed number on the left arm - spontaneously and deeply moved asked me , seeing the sacrifice of Isaac, : “What about Sarah !!?? - While Abraham is the hero of three World religions !!??”

Why do we judge history based on 21st century norms and biases. To be clear, men are generally physically stronger, and imagine themselves to be in charge. The reason women are marginalized historically is that only women can make men feel inadequate through their dependence on women. Cleopatra comes to mind. And then there’s Samson… .

That is indeed a powerful picture - thank you for sharing it.

Was she able to move on and live a satisfying life?

I think the whole problem with this article is found right there. When you judge ancient literature by 21st century standards there is indeed nothing satisfying about their lives. So certainly in answer to the author’s question by any modern standards let alone a feminist perspective, there was no satisfying life. The next problem is what would these supposed questions have added. The purpose mainly of the stories in Genesis is the establishment of the Hebrew nation. I would love to know what spiritual life Abraham had also, not just Sarah, But we don’t know those things because they were not the intent of the authors. Because the authors were not telling stories about women is not really the problem here it is those who think that such things must be included or we really don’t have everything we need. Well of course we don’t have everything we need, even in the 21st century we have not reached that point of utopia!

Seeking to understand a woman’s hopes/aspirations and mind-set in an ancient culture, from this perspective is distorting and shallow and achieves nothing.

The role of a woman in a more recent time comes to mind.
My grandmother travelled by ship at age 14 (with her mother, three brothers, and one sister) from Sweden via London to Montreal, then travelled by train to Finmark, Ontario where her father, who had arrived three years earlier, had a position on the railroad and a company home for them. He had sent extra funds so that his wife could buy stylish coats for herself and the girls and when they arrived (on a cold, wintery Christmas Eve) he had gifts for them. Thereafter, three more children were born to the couple.

The same grandmother travelled with her family to the Canadian prairies and another small Swedish community when homesteads became available. There she married, raised three children, helped as a midwife, won baking awards, was involved in community events, could drive a team of horses, wallpapered, recovered chairs, grew a wonderful garden, read books(including the Great Controversy) and newspapers, wrote letters, acquired and milked several goats when she heard that their milk and cheese were good for one, set a nice table, and travelled in her old age back to Sweden for a visit.

What did women of her day miss? Was life less rich or just less demanding an chaotic?

I expect that the fulfillment of women’s lives (like those of men) have varied from person to person, place to place and era to era.

It’s still available. Although it’s been hidden, one can click on it and read your post. Not sure why somone flagged it. Well, actually, probably some offended men.

Yes, I found the post. Can you explain the problem.

It’s hard to imagine someone flagging your comment. Very strange.

I can imagine it, but they need to explain why, which they aren’t doing.

They seldom do explain; no idea why not.

Didn’t you get a private, personal internal email from the webed?

We try to always give an explanation via a direct message if a comment is manually removed for violating commenting policies. However, sometimes comments are hidden by the system due to a number of criteria. If anyone is ever unsure of what happened, the best way to get an answer is to send a direct message to @webEd

I was wondering the same thing

So the answer is that someone was worried about offending transgendered people. That was not my intention. While women in Genesis were left out of the historical discussions, I had compared a similar problem continuing in 2022. Motherhood is exclusively a possibility for biological women and the current political atmosphere is taking even that away from those women.

Let me just say, biologically, there is male and female, each with a part to play for parenthood. Psychologically, and for a variety of complex reasons, some men and women need to identify themselves as belonging to the opposite sex. That is not up for debate. But the ability to give birth belongs to biological women, no matter how they need to identify themselves. So, motherhood, in a biological sense, belongs to women.

I believe, for a woman, having a child is the most meaningful event in a her life. While carrying the baby, the mother is impacted both physically and mentally in a way not comparable to anything else in her life. It is a spiritual experience. This does not take away from any other type of motherhood. Men, minus the hormones and the physiology involved can’t know what that’s about. For society to take that away from women in 2022, is denigrating women on the same level as we imagine women had to endure in the Bible, where women were property - and still are in some cultures.

If this bothers anyone, I’m sorry, but that is a perspective of a biological mother. Does a biological woman have a voice, too, in 2022. If not, then I guess this will be taken down as well.

Motherhood is exclusively a possibility for biological women and the current political atmosphere is taking even that away from those women.

I’ve read several times where you make this assertion, but I am not sure what you’re referring to.

How is society taking motherhood away from women?

This does not take away from any other type of motherhood.

Again, I don’t understand. What other types of motherhood are there besides… motherhood?

Yes, of course. What case are you suggesting where she doesn’t?

Thanks for the follow up. We live in interesting times.

The Brave New World is upon us.