Girl Meets Church: Is There Room For A Blackness in Adventism? — Adventist Voices

Girl Meets Church: Is There Room For A Blackness in Adventism? — Adventist Voices

Dr. Sydney Freeman, Jr., is an associate professor at the University of Idaho. He is founder and editor-in-chief of The Journal for the Study of Postsecondary and Tertiary Education.

In this episode, host Tiffany Llewellyn speaks with Dr. Freeman about his passion for black authors, a black theology within Adventism, and the concept of a Black Adventist Identity Development.

Tiffany Llewellyn is a Licensed Clinical Social Worker who is passionate about all things race, justice, mental health, and culture. Although she considers herself a change agent and voice for the voiceless, her passion for social justice aims to restore voices to those who have been silenced.

Listen to this podcast episode on iTunes, Stitcher, and Simplecast, or below:

We hope you enjoyed this episode of Girl Meets Church on Adventist Voices! Remember to subscribe on iTunes!

Photo by Photo by JD Mason on Unsplash / SpectrumMagazine.org

This is a companion discussion topic for the original entry at http://spectrummagazine.org/node/10046
laurel (Anne Marbury) December 4, 2019, 6:28pm #2

I finally had a chance to catch up on the Spectrum podcast and listened to this episode.

The title is a little misleading as this is not just a discussion about blackness in Adventism. It’s a discussion about the diversity of thought and practice in Adventism and as a white woman I had no trouble understanding the displacement and disillusionment that Dr. Freeman felt upon attending a Moscow, Idaho SDA church, having previously attended in urban New Jersey and Alabama. While this experience may have had unique aspects for him, it is in many ways a common experience for Adventists who move from one part of the country to another. Adventism seems similar when you look at surface appearances, but delve deeper and you will find fundamental differences so drastic that one wonders how we all fit under the banner of “Seventh-day Adventist”.

The topic of a black theology was raised and while I have very little knowledge of what exactly Dr. Freeman was referring to, it would be interesting to hear more. Personally, I’m comfortable with theology that takes into account personal experience and historical/cultural elements. Christianity has always been influenced by the culture in which it existed.

Just imagine if Christianity had been successfully suppressed by the Roman Empire and had instead moved into say, China or India, and they had become the “early Christians”. The New Testament would have been entirely different, with very different concerns being raised in the early churches. Having said this I can understand the feeling that there is a need for a unique black theology. 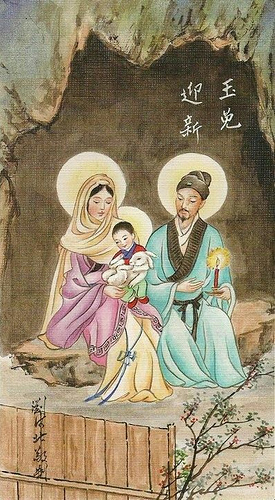 When I was a child my family lived in Asia as missionaries for the SDA church. Occasionally I saw images like this associated with the institutions of other Christian churches and they seemed strange to me. As an adult it seems beautiful to see Jesus portrayed this way. After all, shouldn’t everyone be able to see Jesus in a way that is relatable? (My daughter tells me that in Catholic basilicas this kind of image is common–they seem to understand what Adventists do not.) Where is the recognition within Adventism that our relationship with Jesus, our understanding of God, our relationship with others in the world are unique to the individual and that the individual’s cultural background influences all facets of our religious life?