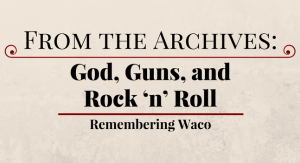 Editor’s Note: This year marks the 25thanniversary of the Waco Siege that occurred from February 28 to April 19, 1993. Throughout the coming weeks, we will be sharing on the website the articles that appeared in the May 1993 edition (vol. 23, no. 1) of Spectrum concerning this tragedy.

I first saw David Koresh—then Vernon Howell—in 1987, when I was an undergraduate at Southwestern Adventist College in Keene, Texas, a little more than an hour's drive from Waco. One morning during a Sabbath School class, I noticed a man sitting by a window near the back of the classroom. He and his friends were handsome and dressed as if they had stepped out of the pages of Gentlemen's Quarterly magazine. At first, Koresh and his friends were quiet, but soon they were trying to dominate the class discussions.

Later, Koresh and his men met with about 50 Southwestern Adventist College students, lecturing them for some time. Finally, several religion majors questioned their methods of interpreting the Bible (particularly prophetic passages), and challenged their use of Ellen G. White. The thing that turned most of the students off to the visitors was their unwillingness to confess Jesus of Nazareth as the Christ.

Although Koresh and his cohort were never rude or violent, they were uncomfortable and defensive when the college students challenged them.

Friends of mine who had extended conversations with them told me that the visitors were Branch Davidians, and that they had non-Christian views on sexuality and salvation. In fact, the Branch Davidians thought the good-looking, long-haired fellow I had seen in the back of the classroom was God's "new" messiah. Little did I know that four years later, when I was completing a Ph.D. in theological ethics at Baylor University in Waco, the "new" messiah would be living about 15 miles down the road.

Davidians (originally Shepherd's Rods), have been a part of the Waco scene since the 1930s. Victor Houteff, the founder, had been disfellowshipped by a Seventh-day Adventist congregation in Los Angeles when he proclaimed that the Adventist Church was apostate. Houteff felt his group was the true "remnant," and that his mission was to call fallen Adventists into his church.

Houteff attended the Waco Adventist church, dominated Sabbath School discussions, shouted at church deacons, and disrupted worship services. The thing that angered the church the most was Houteff’s tactic of doing the opposite of whatever the Waco congregation did.

Fifty years later, Koresh was disfellowshipped from the Tyler, Texas Seventh-day Adventist church. He eventually joined the compound outside Waco. Following a shoot-out with one of Houteff’s successors, Koresh became head of the Branch Davidians and perpetuated Houteff’s interpretation of Ezekiel 9. Koresh, like Houteff, felt that God had appointed the Branch Davidians as the "executioners of the city."

Then he cried in my ears with a loud voice, saying, "Draw near, you executioners of the city, each with his destroying weapon in his hand." And lo, six men came from the direction of the upper gate, which faces north, every man with his weapon for slaughter in his hand, and with them was a man clothed in linen, with a writing case at his side. And they went in and stood beside the bronze altar.

Now the glory of the God of Israel had gone up from the cherubim on which it rested to the threshold of the house; and he called to the man clothed in linen, who had the writing cases at his side. And the Lord said to him, "Go through the city, through Jerusalem, and put a mark upon the foreheads of the men who sigh and groan over all the abominations that are committed in it." And to the others he said in my hearing, "Pass through the city after him, and smite; your eye shall not spare, and you shall show no pity; slay old men outright, young men and maidens, little children and women, but touch no one upon whom is the mark. And begin in my sanctuary." So they began with the elders who were before the house. Then he said to them, "Defile the house, and fill the courts with the slain. Go forth." So they went forth, and smote in the city. And while they were smiting, and I was left alone, I fell on my face, and cried, "Ah Lord God! wilt thou destroy all that remains of Israel in the outpouring of thy wrath upon Jerusalem?"

Then he said to me, "The guilt of the house of Israel and Judah is exceedingly great; the land is full of blood, and the city full of injustice; for they say, "The Lord has forsaken the land and the Lord does not see." As for me, my eye will not spare, nor will I have pity, but I will requite their deeds upon their heads."

And lo, the man clothed in linen, with the writing case at his side, brought back word saying, "I have done as thou didst command me." —(Ezekiel 9:1-11, RSV)

Of course, Koresh was the "man clothed in linen" with "a writing case at his side," who was to put a mark on the foreheads of those men saddened by social injustice. His followers were to kill those people who did not receive the mark.

The interesting aspect of this interpretation for Adventists is the fact that the killing was to cleanse God's ''sanctuary," which the Davidians have taught was the Adventist Church. After the Adventist Church was cleansed, then the executioners could exercise the same judgment on the world.

Members in the Waco Seventh-day Adventist congregation became very nervous at reports that Koresh had stockpiled large amounts of weapons. They were convinced Koresh planned to use those weapons to cleanse the Adventist Church, killing those who did not have the "mark." In fact, in the fall of 1992, members in the Waco Adventist church heard rumors that the Branch Davidians were planning to start the cleansing of the sanctuary on October 22, 1992. Fortunately, it turned out that the Davidians were only celebrating a religious festival.

It was not just his amassing of weapons that distinguished Koresh from Adventists, and even other Davidian leaders. His love for the music scene appeared to have nothing to do with biblical prophecy. Koresh had a passion for rock 'n' roll music. He could often be found in downtown Waco listening to local rock bands while guzzling a beer—or two. Koresh looked for potential recruits from among those in the nightlife scene. Those who frequented the same taverns as Koresh say that he was a charming guy with a sense of humor. After getting acquainted, Koresh would invite members of rock bands out to the Mt. Carmel music studio for jam sessions. Apparently he had an elaborate sound system, quality instruments, and recording equipment. Local rock bands had discovered a cheap way to record their music.

Shannon Bright, a Waco drummer who plays with the band Blind Wolfe, spent time at the compound until two months before the shoot-out with members of the Bureau of Alcohol, Tobacco, and Firearms. Bright first met Koresh and some of his friends at a local bar in October 1992. They invited Bright out to the recording studio at the compound. Bright said that Koresh was an "excellent" guitarist and a very nice person.

Soon after his introduction to the compound, Bright began to hear about the religious beliefs that dominated the lives of the Branch Davidians. Bright found that Koresh could answer from the Bible every question he had about life. "Anything you wanted to ask Dave you could, even why the leaves fall off the trees," Bright said.1 ''What Dave showed me made more sense than anything that anyone has ever shown me in my life....I can't prove he's not who he says he is, and I can't find anyone else who can, either."2 Bright disagrees with those who say Koresh manipulated people with the Bible, making them unable to think for themselves.

It's not like that. Dave [Koresh] has a knowledge of the Bible where he makes all the keys of the Bible harmonize together. It's kinda neat. Passage in and out of Mt. Carmel was free. They didn't have someone that stood at the gate and checked everyone who walked in. It wasn't like that. Anyone could walk in peacefully and walk right back out if they wanted to.3

Bright also commented on why Koresh had to keep weapons.

Everything was coming down. Dave was telling people who he was, and he said the majority of people at first would be against him. They would come and try to take him. And if he just let them take him, he wouldn't get a chance to present his message. He had to stand his ground.4

Bright left the compound after Koresh claimed Bright's girlfriend for himself.

Although that was too much for Bright, he still holds Koresh's teaching close to heart. "I don't think God will condemn me for something I can't prove either way," he said. "When the time is right for the truth to be known about who Dave is, everyone will know."5

Even for Adventists with their fascination with apocalypticism, Branch Davidians had weird religious ideas, practiced a bizarre lifestyle, and were feared as a physical threat. Nevertheless, members of the local Adventist church and many in the community knew the Davidians. It was no accident that the first memorial services in the country for the Davidian dead were held in Waco.

Notes & References: 1. Bright's story about his experience with David Koresh and the Branch Davidians comes from an interview conducted by staff writers for the local Waco paper. The story was written by Mark England, "Still Having Doubts: Drummer Who Hung Around the Cult Continues to Wonder if Howell Isn't Christ," Waco Tribune-Herald, (April 17, 1993), 1A and 4A. 2. Ibid., 1A. 3. Ibid., 4A. 4. Ibid., 4A. 5. Ibid., 4A.

This article was written by Brian W. Harper, PhD, for the May 1993 issue of Spectrum.

This is a companion discussion topic for the original entry at http://spectrummagazine.org/node/8573
tjzwemer (Thomas J Zwemer) February 14, 2018, 7:39pm #2

Those were the days when the term lunitik fringe was popular. But they were generally picking on the Wong. Guys.