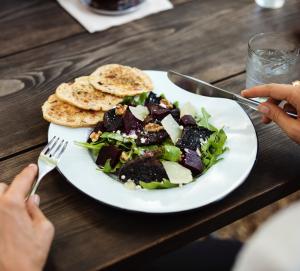 One of the new, progressively more accepted dietary ideas has to do with frequency of eating. It is believed that eating five or six smaller, versus three larger, meals per day is advantageous, especially in order to reduce weight. This new recommendation stands in direct contradiction with the following statement made by Ellen G. White:

Three meals a day and nothing between meals—not even an apple—should be the utmost limit of indulgence. Those who go further violate nature’s laws and will suffer the penalty.”1

Which of the two contradicting recommendations is more consistent with available research studies?

The idea that it is advantageous to eat more frequent smaller meals, instead of less frequent larger meals, each day is based on the assumption that more frequent eating increases the body's metabolic rate, which can lead to burning more calories. Even if we accept that this assumption is correct, there are good reasons to suspect that eating more frequently could actually increase the chances of gaining weight, in spite of the increased metabolic rate associated with more frequent eating. First, the majority of people in America, and many other countries, eat too much fat (thus providing many calories) and too few fiber-rich foods (fiber helps with feeling full). Furthermore, many do not have enough self-control to limit eating to smaller portions. Recommending eating smaller meals more frequently may give extra opportunities to overeat on the wrong (high fat/calories, fiber deprived) foods. Interestingly, societies where people live the longest and have the lowest prevalence of obesity and other chronic diseases, such as people living in the Valley of Vilcabamba, Ecuador, typically eat two to three meals a day, including a large breakfast and small dinner.

Findings from a research study published in the journal Obesity in 2012 yielded interesting results.2 Authors included 51 obese (average BMI = 35.5) individuals who were on average 51.0 years of age. These individuals were randomly assigned to either group 1 (n = 25), which was to ingest three meals per day or group 2 (n = 26), which was described as the grazing group, which was to eat at least 100 calories every 2-3 hours. Individuals from both groups ingested an identical number of calories (~1200 to 1500 per day, < 30% of calories from fat) and participated in a similar amount of physical activity (~200 minutes per week). In the next 6 months, participants assigned to group 1 consumed, on average, 3.2 meals per day, while those from group 2 had average meal frequency of 5.8 per day.

The graph below showed the average weight loss in 3 and 6 months for each of the two diet groups. Interestingly, a greater weight loss was observed among individuals from group 1, as indicative of greater body mass index (BMI) change. These individuals consumed fewer meals per day compared to those from group 2. The findings and the conclusion made by the author of this study are astonishing in light of the new dietary trend to eat more frequently in order to achieve a greater weight loss: “These results suggest that eating less frequently may be more helpful than eating more frequently for weight loss.”2

In 2013, the same journal (Obesity) published results of another study that assessed the impact of meal frequency on burning fat, hunger, fullness, and “desire to eat.”3 Authors included 15 non-obese individuals (BMI < 25). They were divided into two groups. The first group ingested 3 meals and the other group ingested 6 meals per day. Several times per day participants were asked the following questions: “How hungry are you right now?” “How full do you feel right now?” and “How much food could you eat right now?” Authors found no difference in the rate of fat burning (8.7 vs. 8.6 mJ/d). The graph below shows results regarding perceived hunger, fullness, and desire to eat for each of these two groups. The following two quotes from the manuscript describing this study’s findings speak volumes regarding the efficacy of the new diet trend to ingest more smaller meals vs. fewer larger meals:

These results suggest that there is no effect of meal frequency on EE [energy expenditure] or fat oxidation under isoenergetic states [both groups receiving the same amount of calories], which is in agreement with results from previous results. However, hunger…and the “desire to eat”…were significantly greater during 6 meals compared to 3 meals. With the more frequent meal pattern, subjects did not experience the same decreases in hunger or increases in fullness between meals….although consuming smaller, more frequent meals is often advocated as a means of controlling body weight, the present study suggests that this practice has no obvious advantages in terms of its effects on metabolism and appetite, and may, in fact, even have adverse effects on hunger and satiety.”3

Although the initial results of the present meta-analysis suggest a potential benefit of increased feeding frequencies for enhancing body composition, these findings need to be interpreted with circumspection. The positive relationship between the number of meals consumed and improvements in body composition were largely attributed to the results of a single study, calling into question the veracity of results. Moreover, the small difference in magnitude of effect between frequencies suggests that any potential benefits, if they exist at all, have limited practical significance.”4

One does not have to be a scientist to understand that, consistent with the above conclusion, available research largely does not support the idea that consuming more frequent vs. less frequent meals is beneficial for weight loss.

The above-described findings regarding the impact of meal frequency on weight loss can be summarized by the following quote:

It is common practice for weight management clinicians to recommend increasing MF [meal frequency] as a strategy for weight management and to improve metabolic parameters. However, limited research exists investigating the effect of MF during controlled hypocaloric dietary interventions. Furthermore, MF literature often speculates with regard to efficacy of MF treatments based on research using normal weight, overweight/obese, or some combination, where much diversity exists within these various populations.”5

Clearly, according to the authors of the above quote, a recommendation to eat more frequent smaller instead of less frequent larger meals is based on a speculation, not on scientific findings.

Another important issue should be considered when discussing how many meals per day should be recommended for individuals to ingest. Although findings are not always consistent across studies, some studies have shown that increased meal frequency is associated with an increased risk of colorectal cancer. The same goes for irregular eating, which also has been associated with increased risk of bowel cancer. The term “irregular” refers not only to eating at different times of the day but also to frequent eating of small meals (or snacks). For example, a study conducted in Northern Italy showed that compared to those eating two meals a day, those who ate three meals a day had a 70 percent higher risk of developing colon cancer and had about a 40 percent higher risk of rectal cancer.6 People who consumed four meals had about 90 percent higher risk of cancer of the colon and rectum. Similar findings were reported in earlier studies. For example, authors of a study published in the journal Nutrition and Cancer found men with lowest meal frequency having half the risk of colon cancer compared to men with higher meal frequency.7 Higher risk of colon and rectum cancers seem to be the result of bile, a substance made in the liver and secreted into the intestine to aid in fat digestion.

It seems prudent to conclude that eating more frequent smaller meals instead of less frequent larger meals per day has little support in available scientific studies. It is likely that this new dietary recommendation is nothing but recent hype that, just as has been the case with many other diet trends, will soon go away. It will be prudent for Adventists to stick to Mrs. White’s advice that, “At least five or six hours should intervene between the meals; and most persons who give the plan a trial, will find that two meals a day are better than three.”1

Roman Pawlak, Ph.D, RD is Associate Professor of Nutrition in the Department of Nutrition Science at East Carolina University.

Photo by rawpixel.com on Unsplash.

During a more extremist phase of my life, we tried the two meal a day plan. It worked okay I thought, but years later my sons (growing boys at the time) told me they had learned to get up in the night and make a large snack of raw oatmeal, peanut butter, brown sugar, and powdered milk, to stave off the hunger pangs. I don’t think I’ll ever get over the guilt of THAT, God forgive me.

Roman Pawlak’s article, How to Defend Adventist Dietary Principles in Light of New Diet Trends (Part 2) was helpful and informative. I wish that that he had entitled it “How to Present…” We as Adventists need to cease being so defensive, particularly when we are approaching subjects like this with strong scientific (see footnotes and Pawlak’s academic credentials) basis. Notwithstanding, this minor point, it was a solid good piece.

I firmly believe that the eating plan you adopt must fit your person. Dieting is not a “one size fits all”. There are all kinds of factors involved in eating correctly and one is diabetes. Diabetics must be careful in how and what they eat and the 3 meal/day plan is most likely the best plan for them. I have tried several different plans over the years and the one that suits me the best is the Paleo way of eating . By combining this with smaller portions, no junk food or in-between snacking, I have lost weight and kept it off. Dieting is an individual matter but eating the right foods is everybody’s concern.

Ah well, there were some things lurking in my background, which gradually came out as this third gen SDA got older and wiser: having been at PUC during the 70’s and hearing Dr. Ford, reading Walter Rea then writing the White Estate and getting no reply, the minutes of the 1919 Bible Conference, female Elders in my family getting the boot at Sacramento Central Church when the Amazing Facts speaker married into our family, seeing the damage which the idolatry of certainty that we have The Truth has done. So I gradually morphed into an Episcoventist…

My understanding is that the 5 or 6 meal-per-day idea is a strategy aimed at keeping blood sugar levels even during the day, which has many more benefits than simply weight loss. There is some evidence that weight gain can be caused by uneven blood sugar levels throughout the day, but there are many other maladies caused by blood sugar drops and spikes, such as:

Three very-well-balanced meals per day seems to work for most people (in order to have fairly consistent blood sugar levels), but there are certain people who seem to benefit from 5+/- small meals per day. There is no single dietary regime that works for everyone. If all Adventists were to embrace this one truth, then the dogmatic legalism associated with the health message will diminish.