How Wilson Was Elected: A Case Study for Reform

For the first time during his General Conference presidency, the delegate vote on Ted Wilson’s election was counted and publicly displayed at the 2022 GC Session. As previously reported, 1,284 voted for Wilson, 431 against—a split of 74.9% to 25.1%.

Lots of thanks to the Spectrum team for all the reporting from GC. The facts are important but the analysis and behind the scenes look helps to fit it all in place.

Lowell Cooper’s points are well taken by myself. Having served on the GC Nominating Committee in 2005, I found it distressing to be a first-comer to the GC and the committee. It took days for the committee to find a way to work cohesively together and there was too little background to what we had to decide upon. Cooper speaks wisely and with long experience. I hope his voice and ideas are heard and acted upon.

Proffitt !? - got to be kidding. Interesting name on two accounts.

In light of what essentially is a multi-million-dollar rubber-stamping operation, an enormous amount of the GC Session is occupied by delegates making speeches driven by quickly triggered interpretations of a sentence or even a word missing or present.

This very much mirrors my sentiments - “rubber stamping” on the one hand to overregulate minute details, many of which are handled in quite a diverse manner in different parts of the world. Wasted money, wasted time. However, far more decisive: missed opportunity (not just in regard to elections, which are kind of an interim solution for three years).

I have to believe that if Ellen White were alive today, she would announce that positions were taken that were not inspired by God.

Do we apply to our local SOP Writings Coordinator to order this GC leadership endorsed altar?

The election of the twelfth apostle began with the nomination of two candidates from whom a twelfth apostle was selected by lot in the place of Judas. Voting is a forgotten form of election, but it is still present in the Bible. The same is unanimity in adopting resolutions, i.e. 100%, as described in the first apostolic council.

The picture speaks volumes!!! Kneeling around a stack of Great Controversy!

My husband was wondering if the “white smoke” was detected before or after the vote was cast.

A well-prepared nominating committee might even engage in a search process and select a possible president long before the session.

Has there ever been observed an attempt of a government to infiltrate the GC? If a country considers religious movements, that promote exclusive loyalty to God instead of humans, like the Adventist church, as a political danger, this would be a plausible strategy to weaken such organisations by causing internal dissense and confusion. For many years we have now been witnessing such attempts on secular targets. We know from many sources that the infiltration of top ranking church officials was common practice in Eastern European countries during the time of communism, on conference and union levels. Is there any good reason to believe that this is different today on the level of the world church?

Therefore a careful study of and complete transparency about all the career stations in the CVs of future potential candidates for important positions in the church seems to me to be not only wise but an absolute necessity.

My husband was wondering if the “white smoke” was detected before or after the vote was cast.

There was plenty of fog the day after… 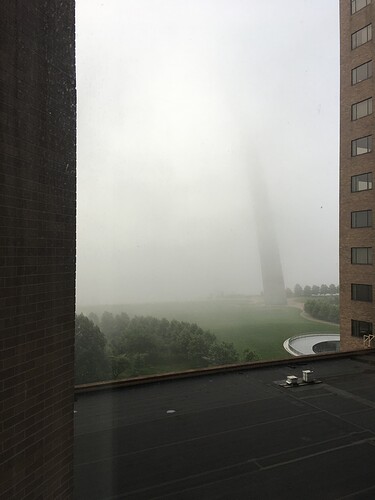 The cover picture to me is a representation of the priests of Ellen White led by Ted Wilson, kneeling and bowing before the towering Babel of books of the Great Controversy, with no fire coming down!
A grim reminder of the confrontation of Elijah with the priests of Jezebel on Mount Carmel.
This is the image of the beast.

I don’t think so. She would always go by the majority vote or opinion to secure her own prophetic status.

First of all, many thanks to Alexander for this measured report.

Very early in the nominating committee process, before other names were discussed, Kathryn L. Proffitt, part of the General Conference delegate caucus, jumped up to the mic and made a motion to “elect” Ted Wilson.

Someone can correct me, but it seems to me that this is in contravention of all rules of order, including those adopted by the GC. A delegate can’t just jump up and make to motion to vote on someone who has not previously been nominated. Essentially it bypasses the whole nomination process. Tabling the motion does not solve the problem. It should simply have been disallowed, IMO.

I’m happy to see that Lowell Cooper made suggestions for reform. I can only pray that these are taken seriously.

Since GC sessions have been rubber-stamping sessions for far too long, I’m sure the following has not been done:
For a much better chance of a genuine nomination and subsequent vote, several names should be vetted by the nominating committee and then presented to the GC in session as nominees. Each nominee should be able to present his vision for the church to the whole session. Each nominee should also be able to take questions and answer them. This decision is far too important to be railroaded through a relatively small committee.

On the upside, the cut-and-dried approach meant that Ted Wilson did not need to use appeals to the Almighty to make things happen his way. (I have both heard of and personally witnessed prayer used as a manipulation tactic. It was reportedly used in the 2015 session to overrule the original majority vote for a certain important position. The scenario goes like this: If the person in control does not like the vote, it’s a call to prayer to implore the Lord to … After a while people get too tired and hungry to continue.)

I still miss Jan Paulsen, a true Adventist statesman, and I’m sorry that Dan Jackson was never elected as GC President. Having been in sessions he chaired in Canada, I can say unequivocally that he was always impartial and made sure that all input was given a serious hearing. At the same time, he never lost his pastoral concern and Christian courtesy for the “unimportant” people in his path.

Perhaps the northern unions need to be more pro-active in reaching out to those south of the equator to work together on shared values. As I understand it, younger Africans and Asians see a lot of things similar to the way we see things in the northern hemisphere. One thing I remember well from the 2016 session is the time we spent handing out information on issues surrounding women’s ordination in the exhibition hall. African people were eager for information since their own division (headed by “Dr” Ratsara) had not given them any information. (We distributed Cindy Tutsch’s book and Ty Gibson’s mini-book.) They were just instructed how to vote at the session, with no attempt to educate them about the issues. This tells me that more effort focused on educating people south of the equator can help to make this church more relevant and effective.

Inge, what do you think of the idea of direct membership elections of local Elders, Conference, Union, Division and GC presidents…if our tithe and offerings are overseen accurately, with receipts that match donations handed out like clockwork, why can’t our votes be managed with equal efficiency…

this way, average members will feel and in fact be more involved, and candidates can hold rallies during election season, or any time they feel inspired to, explaining their reasons for running, along with any ideas they may have for improvement, if they think any are needed…results could be announced at each GC session, which would really boost interest and attendance…

it seems to me that directly elected elders and presidents would be more responsive to ordinary members’ concerns, and the whole culture of delegates and nomination committees would be eliminated…wouldn’t a majority vote coming from a 21 million voting block be more meaningful than anything coming from a selected committee which feels accountable only to its selectors, or a delegate quorum which seems to care only about being delegates again…

I am very gratful for this highly sensitive Louisleak document which thus far doesn’t seem to have been denied by anyone. Please, don’t just gaze at the idolatrous picture of this article. Read it! It explains why even some delegates from extrem loyal fields were quite dissatisfied with what was going on and illustrates the power machinations behind the scenes.

Someone can correct me, but it seems to me that this is in contravention of all rules of order, including those adopted by the GC. A delegate can’t just jump up and make to motion to vote on someone who has not previously been nominated. Essentially it bypasses the whole nomination process. Tabling the motion does not solve the problem. It should simply have been disallowed, IMO.

I don’t really know anything, but I had the exact same thought. Once she refused to switch from “elect” to “nominate,” why wasn’t the motion tossed out? At the very least, let the others have their vote before untabling it.

I still fail to understand how the GC hasn’t adopted online productivity tools to streamline the process. People can make notes, suggest changes, and add questions in the sidebars. All of the nitpicking over the definition of a word could be hashed out over several weeks ahead of time. I’d rather spend 2-3 hours a week preparing than be locked in inefficient meetings for 13 hours straight.

I know some will say “that’s a lot of work," and yeah it would be. But you’d be in the comfort of your own home, and if someone’s not willing to put it in, then why exactly do they want to be a delegate?

I have to believe that if Ellen White were alive today, she would announce that positions were taken that were not inspired by God.

You seem to be close to endorsing Ellen White’s authority to settle disputes and differences. Part of the problem in Adventism is that the 19th and early 20th century writings of Ellen White are currently being used as authorative support for positions taken.