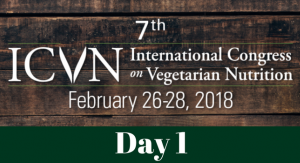 The theme of this year’s International Congress on Vegetarian Nutrition is “Plant-based Nutrition for Personal, Population, and Planetary Health.”

Today’s keynote speaker, Dr. Frank Hu, Chair of Harvard’s Department of Nutrition (among many other roles) joked that maybe he should take on world peace while he was at it! He addressed techniques of precision or personalized nutrition—genomics, proteomics, metabolomics and methylated DNA (too expensive for clinical application), and nutrigenomics (not enough data to be ready for prime time). He made the point that plant-based diets are good for health and only some of them are vegetarian. The Mediterranean, Okinawan, and DASH diets, for example, are plant-based without being vegetarian.

Hu also stated that only some vegetarian diets are healthful. A diet high in refined starches and sugars, hydrogenated fats and saturated dairy fats, and low in fruits and vegetables is not a healthful diet be it ever so meat free. On the far right of the continuum are the healthful plant foods and on the far left of the continuum are the unhealthful plant foods along with high animal foods. The data is strong that a diet of healthful plants reduces the risk of Type 2 diabetes significantly, and a diet of animal products, especially red meats and processed meats, promote diabetes. Unhealthful plant products may have a slightly higher risk of diabetes than the non-vegetarian diet.

He identified saturated fat as risky and said that trans fats are so bad they should be banned by law. Poly and monounsaturated fats are the better choice. Denmark has banned trans fat for around 20 years now and they have lowered cardiovascular disease deaths by 14.2/100,000. I talked to him later in the hall and he said that the U.S. is shifting on trans fats—down by 70-80% over the last couple of decades. Another population intervention he recommends is a tax on sodas. Berkley, CA passed such a law and their soda intake has dropped significantly accompanied by an increase in water intake. A slide on soda consumption from Dr. Hu's presentation.

The U.S. Dietary Guidelines are revised and updated every five years and then released to the public. Dr. Hu sat on the scientific advisory panel for the 2015 guidelines. He told us that one of the scientific recommendations of the panel was to include the information for the impact of meat on the environment. He told us that the meat industry was so irate that they applied pressure to the government officials in charge and that segment was removed. Politics is one of the biggest barriers to making changes for the population that will be enough to reduce health care costs and reduce greenhouse gases. The two major impacts of a diet high in meats are the contribution to greenhouse gasses and the consumption of water.

Following Dr. Hu was a group of investigators who are studying vegetarian cohorts in Loma Linda, UK, Taiwan, and India. Dr. Gary Fraser, of the Adventist Health Study—2 (AHS-2) posed the question of why do results sometimes vary between the vegetarian groups? And he suggested the following explanations: 1) The non-vegetarians they are being compared to have different characteristics. 2) Vegetarianism is not always defined in the same way in all groups. 3) Focusing on just the meat, dairy and eggs doesn’t mean that the rest of their diets are the same. 4) They may have different motivations for following a vegetarian diet. 5) There are different levels of and duration of adherence to the vegetarian diet. 6) These cohorts exist in different cultures and climates from each other. This is what we’re seeing, he said, and it’s no great mystery.

He went on to describe the population of AHS-2, which totals 96,000 with nearly half being non-vegetarian. Lacto-ovo vegetarians are the next largest group at a little over 30,000. The non-vegetarian Adventists do eat less meat than the general population and tend to consume less as they age.

They have been working on some gene expression studies (DNA methylation) with a sub-group of vegans vs. non-vegetarian in AHS-2, but will need larger numbers to get more realistic results. Other bits of information arising from their data include the possibility that the plant vs. animal proteins may be just as important as fats. Colorectal cancer has higher survival rates in the vegetarians than in non-vegetarians. Less than 2 oz of sausage per day raises the risk of colorectal cancer by 60%. High calcium consumers seem to have less risk of colon cancer, but high dairy consumers have less risk of rectal cancer. Vegans have 1/3 less risk of prostate cancer and processed tomatoes (vs. fresh) also reduce risk. Breast cancer is a little lower in vegans, which may be due either to low dairy or to higher soy intake.

Tina Chiu, from Taiwan, described a somewhat different group of Buddhist vegetarians with some different characteristics and outcomes than the American SDAs, but what caught my attention was her sense of urgency about the need for healthful diet and other lifestyle practices to reduce the cost of healthcare and protect the planet. The vegetarians in her cohort had a 9-10% reduction in medical expenditure compared to the non-vegetarians. Finding a diet that can reduce a broad variety of risks would be a big advantage.

The next symposium was a group of speakers addressing the impact of nutrition in pregnancy, infancy, and aging. Susan Carlson, who is a specialist in the omega 3 fatty acid, DHA, told us about several studies that have consistently shown that adequate DHA in pregnancy reduces the incidence of very pre-term birth. Vegetarians tend to have a low DHA status, but supplementation of mother, and DHA fortified formula can correct that. For vegetarians, who would rather not get their omega-3s from fish oil, the supplement Neuromins is a good plant source from algal oil. Adequate DHA is also associated with improved tolerance to stress, reduced wheeze/asthma and increased lean body mass in the infants. DHA given post-natal, seems to benefit visual acuity and cognitive development. The speaker informed us that all baby formulas are now fortified with DHA.

Trudy Voortman from the Netherlands talked about bone health and diet. She described the data that indicates that lacto-ovo vegetarian diets seem to be optimum for bone density while both vegan and animal food diets have lower bone density and higher fracture risk. These results from her study are at least partially independent of calcium intake.

Aedin Cassidy from England described her study with anthocyanins from blueberries, which ran for 6 months—longer than the usual blueberry studies. At least three servings a week were associated with 8% reduced hypertension, 15% reduced diabetes, 24% reduced Parkinson’s disease, and a 32% reduction in heart disease. Anthocyanins also seem to protect from diet-induced obesity and insulin resistance.

Our last speaker for the day was David Baer from the USDA. His research was on nuts and cardiovascular disease. Any nuts will lower LDL (the bad cholesterol)—the dose seems to be more important than the type of nuts. Above 50 grams of nuts, the benefit starts to drop off. There is an inverse association between nuts and all causes of death, but especially cancer and coronary heart disease. They are hypothesizing that nuts are lower in calories than originally analyzed, but because of their fiber content and the chewing required to eat them, not all of the fat is absorbed.

The day concluded with a poster session and reception.

There should be a conference on meat substitute products. my children called them food substitute. A good diet does not call for a concentration of gluten.