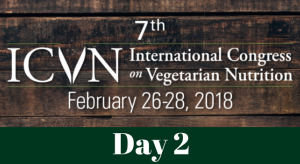 The plenary speaker for Tuesday morning at the International Congress on Vegetarian Nutrition got a standing ovation. Dr. David Katz from Yale University School of Medicine spoke about the hidden elephant in the room, which is knowing the truth of what is best to eat for our health and our reluctance to swallow it. The best foods for humans are whole foods that are plant predominant or plant exclusive. They consist of fruits, vegetable, nuts, legumes, and grains. He cited an article “Healthy Eating is the Best Revenge” by Fred Bergman, et al. which points out that diseases that are listed as the top causes of death, are really effects of other factors. There are 10 factors listed in the article, but Katz focused on the top three—tobacco, diet, and physical activity. Those three explain 80% of the top causes of death. He framed it as a bad use of feet (exercise), forks (food), and fingers (smoking). Those are so effective that we should have to talk ourselves into using drugs rather than talking ourselves into lifestyle changes. DNA is not our destiny; dinner is. In the ancient world (or in the third world) physical activity was unavoidable and calories were hard to get. Today, calories are unavoidable and physical activity is hard to get.

He made a few points about some current headline controversies. It has been making headlines in news reports that saturated fats are no longer a culprit in heart disease, but they have never been exonerated, he says. A couple of metanalyses in the past 7 or 8 years showed that rates of heart disease are high and constant over a narrow range of saturated fat intake. They don’t really shed light on what happens when saturated fats are replaced with healthful fats and foods. Instead, they were looking at the lack of difference in outcomes when replaced with options that were worse than saturated fat.

The sensible way to reduce the percentage of your calories as fat would be to eat less total fat. The American way is to eat more carbohydrates, especially as refined sugar calories, and fat calories drop as a percentage, but not in actual amounts. There is more than one way to eat badly and Americans are committed to exploring them all. For example, he said, if everyone substituted beans for meat regularly, the subsequent drop in greenhouse gases would meet 60% of our commitment to the Paris Accords. The American response to that has been to withdraw from the Paris Accords. Meat intake may be a complex health issue, but it is a simple climate option. Americans made it to the moon because we wanted to go, we were relentless in pursuing that goal, and we knew where it was. The same kind of determination will be required to protect our health and our planet. Only in our unity, he said, is there strength to change culture. He has founded the True Health Initiative which draws from the strength of 400 scientists from 40 countries. The areas where they agree are larger than the areas where they disagree on health practices—feet, fingers, forks, sleep, stress, and love. We need to stop letting health languish on the road less traveled. The morning’s symposium included Canadian John Sievenpiper on pulses (beans, peas, chickpeas, and lentils). He compared acarbose, which converts the diet to a low glycemic diet, to pulses, which are low glycemic foods and in multiple trials have shown improvements in body weight, blood lipids, blood pressure, and blood sugar control.

Neal Barnard, from the Physician’s Committee for Responsible Medicine, presented studies comparing vegan with non-vegetarian diets. Vegans could eat unrestricted amounts, while the control group was calorie controlled. Even when both groups were isocaloric, the low-fat vegan diet lost more weight. He described the after-meal calorie burn known as the thermic effect of food. This thermic effect increases the metabolism for 3 to 4 hours after eating. Vegans have a 16% higher thermic effect of food than their control groups. More fat in the diet down regulates the mitochondria, slows the after-meal calorie burn and increases insulin resistance. He also stated that extra dietary fat disrupts the intestinal barrier and increases the release of endotoxins into the bloodstream. He told us that the American Medical Association has passed a resolution on feeding patients in hospitals and guests in cafeterias. They recommend plant-based meals, the exclusion of processed meats, and healthy beverages. The PCRM has posted a news release on their website.

Jordi Salas Salvado from Spain presented a series of studies looking at the impact of the Mediterranean diet on diabetes and its complications. The Mediterranean, Vegan, and DASH diets have all shown a reduction in insulin resistance. Vegan and low fat plant-based diets show reduction in neuropathy pain and more so if B12 supplements are included. The Mediterranean diet that includes extra virgin olive oil and nuts is associated with reduction in retinopathy and cardiovascular disease. Plant-based diets are associated with a drop in all-cause mortality of 59%. More studies need to be done to solidify this information.

Mark Messina is an expert on soy research and speaks at every one of these conferences. It is pretty clear now that soy doesn’t exacerbate breast cancer and probably is beneficial for breast cancer survivors, even during chemotherapy. The mice study outcomes that originally raised concerns do not play out in human studies.

I was looking forward to Alice Lichtenstein’s presentation on “Is Butter Back?” There have been so many headlines and reports from various sources that I wanted to hear a good scientific presentation on it. She reviewed the foundational studies that led to the conclusions about the down sides of saturated fats in the first place and they are strong, solid studies. She suggested that the reason questions have emerged lately is due to faulty message translation. The recommendation to reduce saturated fats ended up shifting to a focus on reducing total fat. The information on the problems with trans fat from hydrogenated sources somehow made butter look better by comparison. She also addressed the hype about coconut fat which still raises serum cholesterol while canola oil, olive oil, safflower, and corn oil reduce cholesterol. Her conclusion—butter is not back, and coconut fat is not better. In the Q&A session, she talked about having conversations with reporters. Her message is, “I am the scientist and have the most accurate information. You are the journalist and it is your job to tell the truth in the most clear and clever way. Your job is not to distort the truth for the sake of headlines.”

Sebastian Brandhorst of USC presented on the preliminary studies they have been doing on Fasting Mimicking Diets and their impact on longevity. Mouse and rat studies have shown that calorie restriction increases the length of life, so the question arises of how humans would respond to the same treatment. The researchers developed a diet that was about 750 calories a day and low in protein. Their subjects followed the diet for 5 days in a row once each month for 3 months. This protocol favorably impacted risk factors for metabolic syndrome and other age-related diseases. Larger studies will need to be done to determine the longer time impact on diabetes and cardiovascular disease.

Francois Mariotti, from France, discussed protein heterogeneity within both plant and animal sources. They come in assorted foods that are diverse groups of many other nutrients. Some amino acids perform specific roles such as arginine being a precursor of nitric oxide which benefits endothelial (inner lining of blood vessels) function and insulin resistance. A high saturated fat plus high sucrose meal impairs the nitric oxide synthesis which leads to vascular endothelial dysfunction. Protein sources have been associated with the metabolic syndrome and its components, with insulin resistance and with diabetes. Dr. Holly Mattix-Kramer, our last speaker of the day, works with chronic kidney disease (CKD) patients for which diabetes is the number one cause. It occurs in 15% of the U.S. population—about 600,000 people and $40 billion in Medicare expenses per year. High intake of animal protein increases the glomerular filtration rate and kidney blood flow by 30%. This does not happen with plant proteins even if the amounts are identical. Only red meat was significantly associated with an increased risk for kidney failure and needing dialysis.

There is also an association between protein and blood pressure. Higher plant protein intake is associated with both lower systolic and diastolic blood pressure. Dr. Mattix-Kramer said that a healthy gut prevents bacteria from getting to the kidney. Elevated levels of urea from a poorly functioning kidney impacts the permeability of the gut and allows more bacteria into the blood stream. Nutrition education and coaching can make a significant difference to the progression of kidney disease and only about 12% of kidney patients get to meet with a dietitian even though it is covered by insurance. She made the point, once again in this conference, that medical care could be less expensive with plant-based dietary choices.

Our day closed with a banquet, which was served in a very large tent that had chandeliers hanging from the high tent frame and beautifully appointed tables—real china, cloth napkins, fruit and flour centerpieces and plentiful, colorful vegetarian foods. Tomorrow is the final day.

This is a companion discussion topic for the original entry at http://spectrummagazine.org/node/8603
ProfessorKent (Jeffrey Kent) March 3, 2018, 9:35pm #2

These meetings are truly outstanding and contribute to the good names that Loma Linda University and the Seventh-day Adventist Church have earned. Nice to hear the truth be told not only about the positive impacts of a vegetarian diet on human health, but also on the environment.

The best foods for humans are whole foods that are plant predominant or plant exclusive. They consist of fruits, vegetable, nuts, legumes, and grains.

She and James were friendly with Professor Graham, developer of the ORIGINAL Graham Crackers.
[Not the ones made by Nabisco, LOL!!!]
They were also friends with quite a number of other health promoters.
Then there was their “adopted sons”. John Harvey and Will K. Kellogg. John Harvey spent
some time in Europe before returning to the U.S. and associating with the Sanitarium.
The original sanitarium began in the late 1860s in a large house.

The best foods for humans are whole foods that are plant predominant or plant exclusive. They consist of fruits, vegetable, nuts, legumes, and grains.

It’s amazing how concurrent it is with the myriad of health reformers that were advocating, writing and speaking on the same things that EGW spoke about…only they wrote and spoke several decades earlier than Ellen White.

Here are a couple of interesting brief articles: 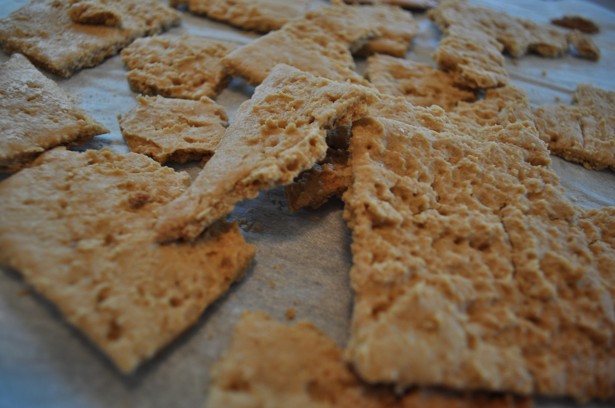 One of America's first diet hawks, Sylvester Graham was certain that sexual desire was ruining society. His solution: whole wheat. How a zealot's legacy lives in our foods today.

There are so many more, of course.

This was a very popular movement well before EGW. When reading some of their writings, they sound just like Ellen’s writings…except decades earlier.

PS Isn’t it time to be real about EGW’s health visions/info and where it originated?