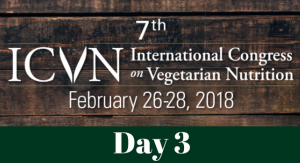 “It’s time to move beyond just personal health and wellness to the health of the whole world and the health of the planet” said LLU Provost, Ron Carter in his welcome address Wednesday morning at the International Congress on Vegetarian Nutrition.

Our presentations on this last day were about vegetarian/plant-based diets as part of the stewardship of the earth. The plenary speaker was Joan Sabaté, the chair of the congress, and his topic was Planetary Health and Vegetarian Diets. He posed the question, “Does the planet need healing, and can humans do anything about it?” He suggested two areas: 1) Limit our use of the earth’s resources with boundaries and 2) Avoid environmental degradation.

In addressing those issues, he informed us that 19–29% of all greenhouse gas emissions are due to the food/agriculture sector and 80% of that sector is due to livestock and meat production. Meat production is responsible for 70% of all human water use, 80% of deforestation, and 30% of energy consumption. He described the interrelationship between diet, environment, and health as a trilemma and proposed the following: 1) Develop strategies for humans to shift food choice and diet patterns, 2) Improve agricultural techniques, 3) Reduce food waste and losses in the food chain. “The aggregate dietary decisions that we make,” he said, “have a large influence on climate change.” The following symposium was a series of presentations about the impact of diet on the environment. Nick Wilson, from New Zealand, submitted that our objective should be to identify foods and dietary patterns that are healthy, low cost, and associated with a reduction in greenhouse gases (GHG). The lowest cost diet they could calculate was linked to an 80% reduction in greenhouse gases. Of course, as he said, the lowest cost diet was somewhat contrived and didn’t account for some extraneous costs like food subsidies and GHG taxes on agriculture. Additional costs that he described for a high meat diet were high degree of flooding due to deforestation for more grazing land. The New Zealand floods were responsible for several deaths. They also have an unusually high rate of campylobacter contamination which has lead to significant hospitalizations and deaths. Recently, there has been some government regulation that has cut those numbers in half. He also pointed out that in addition to GHG, deforestation, and floods, biodiversity, water use, and Co2 sequestration were also environmental concerns—some of which were significantly impacted by a high meat diet and others less so. The production of meat is a high use of water, but so are almonds, for example.

Ruben Sanchez from Spain via Chile presented a study on “Westerners Attitudes Toward Meatless Diets in Relation to Planetary Health.” In surveying several European and North American countries, they determined that only a minority are aware of the relationship of food production to climate change and highest awareness was in the Netherlands. The Netherlands also had the highest number of vegetarians—18% compared to 3% for the U.S. In asking to what degree people were willing to eat less meat for environmental reasons, they found that women were willing to eat less and men much less so. They concluded that Westerners are not currently aware, not ready to reduce, and mostly not willing to hear that meat eating contributes to climate change. Helen Harwatt, from the U.K., informed us that this next decade is crucial to slowing/halting the GHG emissions and warming of the planet and that methane reduction is a relatively quick way to achieve the current goals. She also focused on the inefficiency of producing animal foods vs. plant foods. Every calorie of beef produced requires 37 calories of plants. Pork is 1:12, chicken is 1:9, and eggs/dairy is 1:6. In the U.S., she said, 67% of plant calories produced are fed to animals.

Marco Springmann, a youthful, wiry, high-energy speaker from Oxford, England, also talked about inefficiencies of animal food production. He pointed out that there is a 150 calorie shift from the current U.S. diet and the actual USDA recommendations for diet. If calories come down, the GHG emissions will also come down. The new Dietary Guidelines, he suggests, should focus on a reduction of meat, dairy, and total calories, not just nutritional adequacy. Nutritional adequacy is a poor marker for healthfulness of diet.

We had a tasty break during the noon hour, with a lunch, food prep demonstration, and presentation by Wendy Bazilian on the intersection of health and flavor in plant-based diets. I was delighted to see her. She did part of her doctoral field project at St. Helena Hospital back when I was working with the residential health programs. She made walnut chorizo and demonstrated the anatomy of grain bowls, an incarnation of which we had for lunch. She gave us a pattern handout which provided ways to combine ingredients in a bowl that could be vegetarian, vegan, or allow for small amounts of animal proteins. When she come off the platform, she was besieged by former professors and mentors for hugs and pictures. The last segment of the day was devoted to practical and clinical applications of vegetarian diets in a variety of settings with a series of speakers doing short presentations.

Matt Ruscigno, who is a vegetarian athlete, unsurprisingly talked about “The Vegetarian Athlete.” The nutrients of concern are total calories, protein, and iron. If an athlete becomes vegetarian and finds him or herself feeling fatigued and weak, chances are pretty good that they are just not getting enough calories. Calorie needs are routinely around 4,000–5,000 and some need as high as 8,000 calories. (I know of Olympic athletes that take in as much as 10–12,000 a day). Because of the bulkiness of plant calories, athletes may need more concentrated and refined foods to get it all in. Stomach problems are not uncommon.

Protein requirements range between 1.2–2 grams per kg of body weight with an additional 10% for plant-based diets due to less efficient digestibility. Protein supplements are not needed since the high calorie intake carries a lot more protein than the average diet contains. The recommendations regarding iron consider the fact that all plant-based iron is heme iron, which is less well absorbed than the non-heme iron that make up about 40% of iron from meats. Matt suggested that vegetarians include good sources of vitamin C with their food since it can increase the absorption of iron up to 5 times.

Brenda Davis presented an interesting father and son case study. The son was diagnosed with a rare cancer in his mid-thirties and switched overnight from a wine drinking gourmand to a vegan. His parents said they would change their diet along with him to make it easier for the family to keep eating together. Subsequent to this change, his cancer went into remission and continues to be so. His father was also severely ill. He had Type 2 diabetes, cardiovascular disease, with one heart attack, hypertension, malfunctioning kidneys, peripheral artery disease, and cataracts, among some other health issues. He was taking 17 pills per day and 35-40 units of insulin. Within a year, he was off all his medication, his blood sugar was normal, his kidney function had normalized and over additional time, his artery disease gradually reversed.

Brenda listed the following as her recommendations for clients like him:

She also suggested that government policies should make healthy choices the easy choices and that hospitals should provide healthful foods.

Wes Youngberg also presented a case study of a firefighter who had both diabetes and acute renal failure. My biggest take away was that although the usual dietary approach is to recommend a low potassium diet, he took the approach that low potassium translates to low fruits, vegetables, and legumes—i.e. a less healthful diet. Instead they successfully recommended a high potassium, plant-based diet and used potassium binders for a week until they were no longer needed. The diet should be healthful enough, he said, to dramatically reduce the condition.

There is a 2016 updated Academy of Nutrition and Dietetics (AND) that was co-authored by Vasanto Malina and she reviewed it for the attendees. Of all the position papers of the AND, this is the most popular. You can read it for yourself here.

This was a very stimulating and interesting three days of meetings. I have not reported on every speaker. Some were a little too complicated or had too much medical jargon to write about easily. Some had so much information coming by so fast, that I couldn’t do them justice. There will be another International Congress on Vegetarian Nutrition five years from now. I would recommend it as an event well worth attending.

The true villains are those who feed animals anti biotics and Monsanto weed killers etc.

Outstanding presentations. Wish I could have attended! The take-home message is clear enough.

It’s great to see the Adventist community focus on collective/environmental health and planetary stewardship as a motive for a vegetarian diet rather than the longstanding appeal to the individual person’s desire for longevity.