Everett Brown, the president of the Seventh-day Adventist Church in Jamaica, said at an Editor's Forum of the Jamaica Gleaner that he hopes to soon employ the first woman pastor in Jamaica. Brown's remarks came during a conversation with the leader of the Jamaica Union Conference about the Seventh-day Adventist Church's 2015 vote on ordination at the San Antonio, Texas General Conference Session.

According to Erica Virtue, who authored the Gleaner article, Brown "is certain that it will only be a matter of time before women will stand on the pulpit as ordained ministers."

At the January 2014 meeting of the General Conference Theology of Ordination Study Committee, the Inter-American Division (IAD), the parent organization of the Jamaica Union Conference, provided a summary report of its study of the ordination issue, which concluded that nothing in Scripture prevents women from being ordained. The IAD report made the following points:

Speaking to the Gleaner, Brown said he hopes to further the goal of promoting women in pastoral ministry by installing the first Jamaican woman pastor in office. "[The Adventist denomination has] female pastors ... and one of my goals, and it's time I am going public with this ... is to employ the first female pastor in the church in Jamaica," Brown told the Editor's Forum.

Dr. Lorraine Vernal, Director of Family, Women, Children & Adolescents Ministries for the Jamaica Union Conference, told the Gleaner that she expects "the time will come" for ordained women pastors in Jamaica.

Both Vernal and Brown took note of the cultural and ecclesiological considerations that currently prevent women from being ordained world-wide in the Adventist denomination, but both expressed optimism at the prospect of seeing women continuing to play an increasing role in pastoral ministry--even as ordained ministers.

Congratulations with going public with this affirmation that the Gospel is inclusive of both men and women and for affirming the Priesthood of ALL Believers as foundational to Adventism.

The priesthood of all believers is foundational to Protestant Christainity. Rome et al cling to an Old Testament culture that was type. We are the adopted sons and daughters of Christ, our High Priest, hence we are of the household of priesthood., In 67 years of Marraige I made one independent major decision, I asked Betty to Marraige me. she said yes. Head of household is merely a figure of speech. I make fewer errors when Betty proof reads my writings. I bet that the best pastors have their wives proof read their sermons. After all they are well known as the better half. TZ

“Aiming” is just wishful thinking.
There has to be Action in order to accomplish something.
Pick out a Woman who meets the requirements of “Pastor”.
Ordain, NOT Commission her so she is entitled to become Union President at some time in the future.
The BEST time to do it?
Sabbath, April 9, 2016.

Thank you Brother Sam Geli. Your FB #14 and #28 says it all. Now is the TIME for President Everett Brown to put INTO PRACTICE what HE BELIEVES “IF” he is a TRUE SDA and truly believes in the 28 Fundamental Beliefs of the Seventh day Adventist Church.
FOUR [4] days left till Sabbath.

4/6-- Jeremy "tending to needs of weak church members"
Should we have said this in the days of ML King? Said during segregation – integration disruptions?
Discrimination is an evil. Just because a “member is weak” does not give us a right to continue Evil in the church. NO! It needs to be met head-on.
BAD rules and regulations need to be changed. Sometimes BAD rules and regulations need to be ignored. Need to be disobeyed.
We need leaders with the guts and fortitude of an ML King in the North American Division.

It takes courage to make decisions that are contrary to long-standing practices. May the Holy Spirit provide that courage and guide this union as it moves forward.

when all is said and done, i’m glad our church is moving as slowly on the issue of women’s ordination as it has…my sense is that it causes genuine distress and disorientation for some to see women becoming ordained, and leading a local church, let alone a conference, or a union, or a division…these weaker individuals are part of our church, too, and their feelings and spiritual welfare must not be forgotten…tending to the needs of weak church members is a positive biblical command, Rom 14:1 - 15:3…

Respect and Leadership go together. You can’t have one without the other. Therefore, it is important to know how to gain respect and to maintain morale with good leadership skills. This article in Spectrum reports that:
“Everett Brown, the president of the Seventh-day Adventist Church in Jamaica, said at an Editor’s Forum of the Jamaica Gleaner that he hopes to soon employ the first woman pastor in Jamaica.” 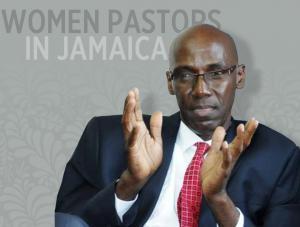 A cursory look at the body language in this picture and the lack of a direct focus on the camera, and the hand gestures alog with the posture of the body, could be interpreted by some as a lame response to a serious issue. To say you hope for something is like wishing for world hunger to end some day. There are no words of apology, contrition, repentance for the lack of respect shown to our Jamaican believers. In particular the women members of the church in Jamaica.

Of the 28 major beliefs of this church Number 14 is explicit You notice it does not say we hope, or speak in conditional third person terminology. It says what the “church is”. This belief does not exclude or church in Jamaica. If Brother Brown is a wise leader he will memorize it…

Respect is really about what we admire in the world and in people. People tend to admire things that they want. For example, if you want to be obedient to God you will respect obedience to beliefs and ideals that demonstrate your compliance. If you respect women, you will treat them with respect, kindness and love. What we want tells a lot about who we are.

Many people that are trying to attract good things into their life have one major flaw. They do not respect what they seek. Brother Brown get with the program and stop stalling! When the love of money waxes strong in the hearts of men, you can expect pride to infiltrate society and bring down the humble. In due time, pride destroys men and the cycle continues.

Thank you Everett and the Jamaica Union. You are doing what you can in the cultural context you are situated in. The impetus towards change cannot be measured by the one yardstick. Others may be more vocal and forceful than the Jamaica Union but that does not lessen Jamaica’s contribution. Rene G.

The thought process that is encapsulated in the phrase, “My goal is to employ the first female pastor in Jamaica” is just pathetic.
Suppose I want diversity in my company.
Shall I just advertize for black people?
Who wants to be the poster girl in this case for this Union President so he can get his picture in the paper?
If you need a pastor get the best one you can find with the skill set that fits the church in question. If it happens to be a female and the membership agree then let it happen, but don’t hire a female just because you can and THEN try and find someplace that will take her.

When that finally happens, who will be left in the church to care?

I am waiting for my area to make such positive statement. For me there is not discussion needed. In fact the first vote did not even have to go to the General Session. Gender equality means that under God and the law both male and female have equal voice, vote, authority, access,
opportunity and protection.""

“Gender quality does not force or require gender roles.
It frees one to make his or her own choice about roles.”

“Gender equality is a Creation design and
a post-Calvary mandate.”

More and more of this must be expected. Bold leaders of the Seventh-day Adventist Church will oppose San Antonio by both precept and action. The leadership of the church will never have a tooth against such decisions because San Antonio neglected all the studies of the TOSCs & all the conclusions of the various Division committees that saw nothing wrong with women ordination to the gospel ministry.

One would indeed urge the Jamaica Union President to go ahead and do that thing urgently. It is very important for the Fundamental Belief #14 to be respected by everyone worldwide in the Seventh-day Adventist Church.a

If women’s ordination is of the Lord, the gates of hell will not be able to prevail against it. Therefore, let us do things decently and in order.

God promised that David would become king. David waited patiently on the Lord, and became king without having to overthrow Saul or any of his sons.

Going against the decision made by the General Conference, who speaks for God when in session, is acting foolishly like Jacob. He was promised the birthright, but went about an unacceptable way to achieve it, which almost cost him his life.

Remember, that the means don’t always justify the end. I don’t believe that it’s the will of God to oppose the decision made by GC and ordain women, even if such ordination isn’t unbiblical.

At times we have to put our rights aside or on hold, for the good of the church. According to the SOP, Abraham put his right to choose first and allowed Lot to do so far the sake of peace or unity.

The finishing of God’s work is not dependent on the ordination of women as some would have us believe.

One of Jesus’ last prayers was for unity.

Wait, I say, wait on the Lord. You will be glad you did.

If women’s ordination is of the Lord, the gates of hell will not be able to prevail against it.

That’s why we continue to see union after union affirming women and making changes to affirm their gifts, ordain them to the Gospel Ministry, and move ahead the work of God.

Please update yourself on the role of Adventist, ordained women in China, the U.S. and other parts of the world.