Katrina Blue Reflects on William Johnsson’s Book “Where Are We Headed? Adventism After San Antonio” 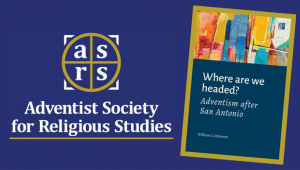 Editorial Note: The following paper was presented at the 2017 Adventist Society for Religious Studies (ASRS) during the Sabbath morning Panel Discussion on the topic of William G. Johnsson’s book Where Are We Headed? Adventism After San Antonio. Read more about the six young scholars who presented and the publishing schedule for the papers here.

As a fellow, native Australian, I appreciate immensely Bill Johnsson’s straight-forward, honest, personal, at times cutting and critical reflections in his book, Where Are We Headed? Adventism After San Antonio. Having lived a life devoted to the Seventh-day Adventist Church and its mission, a stellar resume under his belt, combined with the wisdom of age, Johnsson at 82 years old unravels his personal angst over the current state of Adventism following the 2015 General Conference Session in San Antonio, Texas. He offers much upon which to ponder and reflect. In his own words, he engages in a “lover’s quarrel” with the church he has served for decades. But, like many, Johnsson finds it increasingly difficult to identify with its processes and decisions. “Where are we going?” is a natural and pertinent question. I would like to comment on three isses Johnsson raises in his book to engage in further critical thinking.

Number One: the “War”

Johnsson states, “The war is over—San Antonio settled it but not in the manner some Adventists would like to think. The war is over because the ordination of women pastors will spread rapidly throughout most parts of the world church” (p. 12). I fear this jubilant claim is overly idealistic. It is not a war; it’s a system and it’s not over. The idea that the Adventist Church will surely steam ahead gloriously with the ordination of women pastors in spite of San Antonio overlooks the crippling impact yet again of such repeated General Conference decisions on the fate of women in ministry. Following 2015, women were ripped out of women’s ministries leadership positions to be replaced by men in various parts of the world. Others were removed from the office of elder, while female pastors had to confront conflicting and confused responses from their congregants. A female pastor shared with me that her church members still say to her, “You’re not my pastor.”

It’s an age-old issue: patriarchy. Whether you believe it was instituted by God in the creation order, or is an outcome of the Fall of Adam and Eve, the basic disharmony or dominance/submission model of relationships between males and females is deep-seated and widespread in spite of modern day appeals to equality. Feminists argue that patriarchy is the basic social system and is near universal in scope across cultures. Women have been able to penetrate institutionalized forms of Christianity in only limited ways. San Antonio sent an unwritten, conflicting, non-verbal message to Seventh-day Adventist women: we still question if we want you. Or, we want you, but…

How do we move forward from this? The North American Division can set goals to include more women in pastoral ministry (to be applauded as a positive step toward promoting qualified and called women into ministry), they can subsidize more salaries, and find conferences to bring female pastors on board, but we must not assume that society or even the local church automatically understands or values them. We need to draw people’s attention to God and the Imago Dei, male-female equality in Christ, in marriage, and in the gospel-centered, Spirit-driven Church.

Number Two: a church in decline and the millennial generation

Like the Vietnam War which ran from 1955-1975, tiring many Americans of the atrocities of war, and engaging in combat with forces that did not lead to any meaningful solution, the younger generation does not get “the war” and many have had enough. Millennials are engaging in their protest march by marching out the doors of the church. Johnsson goes so far as to say that they are “laughing at Church leaders” out of the absurdity of the Church’s official stance on women’s ordination (20). While I haven’t heard laughter, I have sensed and heard the deep-seated frustration and pain. It’s not just young people; the middle-aged and old are included, too. They are tired of the institution and its inflexibility.

Johnsson’s prognosis is stark: the institution simply cannot sustain itself (68). The statistics simply don’t warrant its long-term financial viability. Moving ahead the church may look very different in the next five, 10, or 20 years. And yet, Johnsson is convinced that the Seventh-day Adventist Church will not merely survive — it will grow. If this is to be the case we need to find new ways to engage in face-to-face, meaningful Christian community.

Adventists are now in our second century, he notes, the same point at which the early church departed from Jesus’ teachings and practice (53). Johnsson ends up with a study in contrasts which leaves the Adventist Church looking not much better than the white-washed tombs of Scripture. “What impresses me about Jesus of Nazareth,” he writes, “is there’s no baloney. Organized religion is full of it. And we Adventists have developed our own variety. We specialize in Adventist baloney” (135).

His statements are vitriolic and honest. Johnsson questions the validity of the Church’s number crunching, both qualitative and quantitative. He questions the use and misuse of funds: $45 million every five years for General Conference Sessions that could be dedicated to the poor, community development, or mission evangelism. Dedicated persons at the Church’s highest level who travel the globe sitting on committees and dreaming up new programs that result in little success or advancement of the kingdom. It’s time to get honest.

Is Johnsson’s voice a prophetic warning? Whatever it is, his call is desperate. Instead of worrying about which side we belong to we need to rethink the Church. Johnsson rightly points to the Kingdom of Heaven as the reign of God in which the Church participates. But what about the Church? What kind of Church are Seventh-day Adventists embracing? Johnsson identifies two radically different versions of Adventism competing with one another (15). We must be careful. Our weak ecclesiology coupled with “eschatological burnout,” as Johnsson puts it, could lead us down the wrong path. In the end, he falls back on the idea that “Adventism will succeed no matter what.”[1]

Though hierarchical forms of institutionalized Christianity are going out of vogue in our generation, we need to remind ourselves that Jesus founded the Church on Himself. Has the Adventist Church begun to slip off its foundation? The answer may lay in part in further, careful reflections on what the Church is. We need to pray, think carefully, and act fast. The Adventist Church may need to radically change its form or be changed by the new forces shaping it. As long as Christ is the Head, and He remains the foundation, His Church will succeed.

[1] From the experience of the closure of Adventism’s longest-running institution, The Review and Herald, in 2014, Johnsson learned the fallacy of reasoning “the Lord won’t let it fail.” He does think that the church may fade away in some regions of the world where it has been in existence for over a century and is currently on life support. Johnsson, Where Are We Headed?, 39, 69.

Dr. Katrina Blue is a systematic theologian and a professor at Pacific Union College.

This is a companion discussion topic for the original entry at http://spectrummagazine.org/node/8412
petersomerset (Peter Marks) November 28, 2017, 9:32pm #2

And yes! I fear that Johnsson’s claim that WO will spread rapidly thru most parts of our global faith community is a critical misjudgement. The General Conference may well use authority to crush moves in this direction and enforce a quasi-patriarchy.

Personally, I consider that the strategy of continuing to ordain women via a system of clayton’s ordination will be self-defeating in the extreme.

Rather, I favor a strategy of mass education. Adventists must engage in a process of grass-roots education concerned with a truly biblical and mature theology of the laity. But those that would engage in such a process must first be clear concerning the biblical teaching.

Is the global Adventist faith communion truly the predicted end time Christian revival movement constituted as a fully lay movement as the early church was? Or alternatively, is our faith communion a two tier movement, with the bulk of us being lay people with little or no function, and an additional and exalted clerical class enjoying the exalted status of clerics. Yes, as Johnsson points out, it may be that there are real similarities between the Adventist church and the early Christian church.

It is very evident that very Catholic cultures as well as tribal cultures will easily embrace the second option. But the Scripture teaches the first.

When Adventists globally can embrace a truly biblical theology of the whole people of God undifferentiated in status, we will then be qualified to think concerning a theology of leadership and the associated rites of appointment.

@harrpa
I understand the term “quasi” to mean "having some, but not all of the functions of "

Over the last 50 years, leadership in Adventist circles has been transformed by the entrance of women.
If we roll this development back by striking down the ordination of women elders, we will still have a residue of women leaders.

The General Conference may well use authority to crush moves in this direction and enforce a quasi-patriarchy.

Can you explain what “quasi-patriarchy” is? What do you mean by this phrase? It seems that either an organization is partriarchial or it is not. Sort of like being pregnant or not.

The Church is already patriarchial. If it crushes affirming women with spiritual leadership through ordination, it seems that would be totally, fully partriarchial.

It’s an age-old issue: patriarchy. Whether you believe it was instituted by God in the creation order, or is an outcome of the Fall of Adam and Eve, the basic disharmony or dominance/submission model of relationships between males and females is deep-seated

A basic characteristic of patriarchy is having stratified levels for its members and under this system women represents the lowest status which serves an important purpose. The purpose is it prevents men from sinking to the lowest level in the totem pole. Take away that lowest level and men will now have to face the fact of being the lowest of the low and deal with the proverbial “castration anxiety.” It is for this reason that men with weak, inadequate and impoverished sense of self subscribe vehemently to patriarchy whether they belong to the secular or religious order. What man would enjoy waking up and finding he has lost his psychological “marbles?”