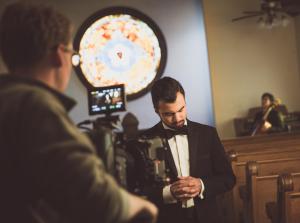 La Sierra University’s Office of Advancement and Department of Music premiered a second music video during the alumni weekend worship service on April 21, presenting an inspiring interpretation and background narrative of the beloved hymn, “It Is Well with My Soul.” The video portrays the hymn’s stirring backstory in a scripted period drama starring actor David Ross Paterson as Horatio Spafford, who composed the hymn in 1873 following a devastating personal tragedy. Paterson’s substantive acting credits include parts in more than 50 films, including “Frost/Nixon,” “The Curious Case of Benjamin Button,” and “Saving Mr. Banks.” He also participated in the award-winning 2015 short film, “The Butterfly, the Harp, and the Timepiece” produced by La Sierra’s Department of Film and Television Production.

Spafford penned the lyrics for the hymn during the grief-stricken aftermath of the loss of his four daughters in a shipwreck in the Atlantic. The terrible tragedy was the latest to devastate his family over the course of two years during which he also lost his 2-year-old son and faced financial ruin when his property investments were extensively damaged during the Great Chicago Fire of 1871.

Spafford learned of the loss of his daughters when he received a telegram from his wife with the now-famous message, “Saved alone …” He wrote the hymn lyrics while on a voyage to meet his wife and during which he passed near where his daughters had died. The music for “It Is Well with My Soul” was written by Philip Bliss. The La Sierra music video for “It Is Well with My Soul” is the second produced and directed this academic year by Advancement development officers Jonathan Davidson and Kristine Barker, and by music department outreach coordinator Lovelyn Razzouk, who served as assistant producer. The video productions seek to showcase the university’s talented students through spiritually uplifting, professionally and artistically developed visuals, music and story-telling.

WATCH “It Is Well With My Soul” from La Sierra University:

This article was written by Darla Martin Tucker and originally appeared on La Sierra University’s website. It is reprinted here with permission. Photos courtesy of LSU.

This is a companion discussion topic for the original entry at http://spectrummagazine.org/node/8746
webEd (Website Editor) Closed December 22, 2018, 10:58pm #2