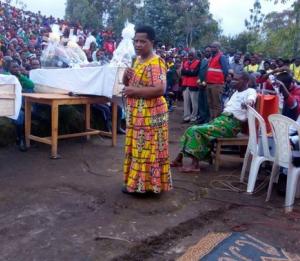 Lighting struck a Rwandan church on March 10, killing 15 members. More than 130 others attending divine services at the Gihemvu Seventh-day Adventist Church were taken to an area hospital and other health centers. Some of those treated have since been released.

Church leaders and government officials, including Abidan Ruhongeka, president of the South Rwandan Field and Mureshyankwano Marie Rose, the governor of the Southern Province of Rwanda, attended a special burial ceremony held Sunday, March 11. Rose offered condolences to the families of the deceased and declared that the district of Nyaruguru will pay the medical bills of those still receiving treatment.

Ted. N.C. Wilson, president of the General Conference of the Seventh-Day Adventist Church expressed his sympathy for the church in Rwanda on his public Facebook page.

We have received alarming word that this last Sabbath, March 10, at the Gihemvu Seventh-day Adventist Church in the southern district of Nyaruguru in the country of Rwanda, at least 15 of our Seventh-day Adventist members died and others were injured during a traumatic lightning strike on the church. Our hearts go out to our dear church members in Rwanda who have suffered this very difficult loss. What a tragedy to have such a strange occurrence of lightning striking during a church service.

On behalf of the world family of Seventh-day Adventists circling the globe, we have offered our deep sympathy and Christian love to all our members in the Rwanda Union which is in the East-Central Africa Division and especially to the families who have lost loved ones and to those who were injured from this traumatic event.

Truly God will provide the comfort and encouragement during this trying ordeal. We have encouraged our church members in Rwanda to keep their eyes focused on the Lord and His soon return when He will bring to life all those who have died in Him. What a hope we have for the future. Please pray with us for our church members and especially the families affected as they look to the Lord for their encouragement and continue with the strong emphasis on Total Member Involvement. Let us pray that each church member in Rwanda may feel the comforting and guiding hand of the Holy Spirit during this difficult time.”

Nyarunazi Seventh-day Adventist church and their company of Gihemvu is in the South Rwanda Field. The church is located in Nyaruguru District, Southern Province of Rwanda.

This article was written by Prince Bahati, communication director for the East-Central Africa Division and originally published on the Adventist News Network.

A very sad day vent. Now the conjectors. The theological whys. It is not for us to reason why,!

This news story has had widespread coverage on BBC news.

At first glance when you hear that sixteen persons had died and one hundred and forty injured in an attack on a church in East Africa, one’s
natural reflex is to blame al Shabaab, the radical Islamic terrorist group responsible for so many horrific atrocities, in East Africa…

However it was a God Himself who attacked these Sabbsth worshippers!

As dismaying as this incident is, it evaporates when merged with the other horrors currently afflicting this planet: the ghastly genocide of the Rohingya in Myanmar, the millions of displaced Syrian refugees, the boatloads of migrants, drowning n overturned boats , in a desperate attempt to reach a more hospitable home.

Time for a God to end all this misery, which he could do in a heart beat, by expediting His Second Coming (long OVERDUE,)

The fact that he chooses to lack the compassion to do so, makes him complicit, culpable, and a codependent in this ongoing saga of human horror.

In the readings this weekend there are two stories intertwined.
Numbers 21:4-9. the snakes biting the slaves who a short time before escaped from Egypt.
God said, "Put a snake image on a pole. Anyone who is bitten, when looking at it will be healed."
The story DOES NOT say God removed the snakes, made them go away. God just said “LOOK!” and the people who did did not die.
John 3:1-21. Jesus reminds Nicodemus of the Snakes In The Desert story. He said "The Son of Man must be lifted up like that snake on the pole so that everyone can see Him. Everyone who sees Him and believes in Him, believes in His power to heal, may have eternal life."
Ephesians 2:1-10. Says at one time we were pronounced DEAD. But God loved us, even though we were Dead and Doomed by our sins. But God gives us back our lives again. When Christ arose from the dead we also rose from the dead and are with Him in heavenly places. He made us what we are, and Created in us New Lives in Christ Jesus.

This is the PROMISE given to ALL the members of that congregation. ALL 156 members.
BUT FURTHER – God gave Christ Jesus to the WHOLE WORLD. Myanmarans, Syrians, all the millions of Refugees and wanderers in the Whole World.
Psalm 107 - the LAST reading tells us to Give thanks to the Lord, for He is good! For His love and mercy endures forever.
There are FIVE verses to the Song. There are FOUR Choruses after each verse. Not everyone fares well in this Psalm. Go through some REALLY Tough Times. But God is there. He is close enough to hear, and that has to be VERY close.
Jesus promises “will NOT perish, but have eternal life [no beginning, no ending].”

My heart is saddened to hear of the death and injury of so many of my Rwandan brothers and sisters. I was only a small child when my missionary parents left the country of my birth but my roots are there. I am reminded again of the hope we have of a better place where there will be no death.

The fact is you can’t prove it was God who struck those people with lightning. Some equally misguided people would accuse the Devil of it.
It was a natural phenomenon. We live in a relatively quiet corner of a violent universe. Be thankful for that and do what you can to make it more peaceful, as Jesus did.

MAYBE we should take a look at the design of the building. Is it the tallest structure in the surrounding area? MAYBE when ASI or whoever go down and build a church they should add a lightning rod to the structure to safely guide a lightning discharge to the earth.

I wish it were true that those who are engaged in active worship and praise of God are given protection. I hope no one worships in that church again, I would’t want to. It would seem cursed to me.

I wished the news article had given us names ages of the individuals that lost their lives that Sabbath Day. I wonder if the church has plans to compensate the families for their loss.

I note that the governor is a female. In times when we need support and validation, someone with maternal instincts and concern would likely be more reassuring. After all this is what mothers naturally and instinctively do the first six years of a child’s formative life of development. It is also this aspect that the WO opponents and those of our church leaders fail to recognize.

However it was a God Himself who attacked these Sabbsth worshippers!

I think this is exactly what many readers would believe, and what the BBC wished them to conclude. Would not Christians entertain the same idea that God was responsible if an adult themed movie studio was struck by lightening killing many of the actors?

I find, in my life experience, that oftentimes warnings are given before some impending doom occurs. The almost silent gut feelings are easy to ignore. Carelessness is responsible for much loss of life and property.

It seems that houses of worship offer no Divine protection. I wished they did. Nazi Germany destroyed many Jewish synagogues, while gunmen find churches and schools easy entry to kill and be killed. Perhaps this is a warning to churches to take security measures more seriously, and not say “We trust in a loving God that will save us.”