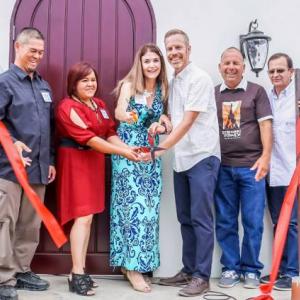 LLU Alumna Sarah Mayer Expands Baja Mexico Community Clinic. Sarah Mayer, PA, co-founder and medical director of Siloé Ministries, and Loma Linda University alumna, launched an expanded community care clinic in Baja Mexico earlier this month, growing the ministry’s operations and offering an increasing amount of care to local residents in need.The new Siloé Wellness Center—which began as a two-room clinic under the stairwell of a local church—is now a 6,000-square foot facility dedicated to offering medical and dental care, health education, family counseling and recreation programs.The facility in the city of La Mision is now home to eight healthcare providers, up from three when the ministry launched in 2008. The new wellness center was constructed in collaboration with Strong Tower Ministries, a non-profit organization focused on orphaned children living in Baja. They began their partnership in 2015. Mayer began Siloé Ministries with her husband Brendan in 2008, naming the ministry Siloé, which is Spanish for “Siloam,” a nod to the Pool of Siloam referenced in John 9 where Jesus sent a blind man to wash his eyes to restore his sight. “We created this clinic because we wanted to provide whole person care, and now we can help even more people in this community here,” Mayer said. From Loma Linda University Health News, “Alumna’s ministry expands to larger facility to meet community needs in Baja Mexico.”

Coming Out Ministries Meetings No Longer Included in Canadian Camp Meeting. Michael Carducci and Danielle Harrison, the American cofounders of Coming Out Ministries, who were booked to deliver an address to families attending a religious conference at a camp the church owns in Cumberland County, are no longer listed from the program distributed to campers this week. Carducci refused to comment on whether or not he would be attending this week’s conference as planned, pointing back to Paul Llewellyn, president of the Maritime Conference of the Seventh-day Adventist Church. A similar event was cancelled in New Brunswick. Calls and emails to Llewellyn and Camp Pugwash went unanswered. The timing was ironic because the event was planned to take place in the middle of pride celebrations. Rainbow flags are adorning banks, businesses, and many town halls across the province. From Truro News, “Conversion therapy session at Pugwash camp cancelled.”

Washington Adventist Academy Math Teacher Biking to Chicago Convention. Monte Saxby, a Skagit Adventist Academy math teacher, has begun a 2,300-mile ride to celebrate his 60th birthday, riding from Anacortes, Washington, to Chicago, Illinois. If all goes as planned, his ride culminates on August 6 at the SDA teachers’ convention. "I thought my husband was crazy when he mentioned it a year ago," Saxby's wife June said.For the beginning of his trip, Saxby will be joined by his son Craig, brother-in-law Jonathan Fish, and nephew Brian Fish."It's going to be a great father-son bonding trip," said Craig Saxby's wife Amanda."He's got a whole community behind him," said Ofa Langi, the North Cascade Seventh-day Adventist Church's senior pastor, who with seven-year-old son Maiko rode along a section of the trail in front of the school with Monte Saxby. "A whole community that's praying him through this." The community has pledged $4.86 per mile Monte Saxby travels to the school's student fund, June Saxby said. From goSkagit.com, “Teacher embarks on bike ride to Chicago.”

Jamaican Church Member Wins Right to not Work on Sabbath. The quality control officer employed by the Petroleum Company of Jamaica (Petcom), who was on suspension from his job without pay since December, has been reinstated following an emergency meeting at the Ministry of Labour between the National Workers' Union (NWU) and the company yesterday.The employee is to return to work on July 30, according to a release from the NWU, which said the meeting ended amicably with the signing of a heads of agreement. The development came shortly after the Seventh-day Adventist Church in Jamaica came out against reports of abuse of the constitutional right of the worker following complaints by the union that the employee was suspended after he indicated that he was unable to work on a Saturday due to his religious beliefs.Vice-president of the NWU Arthur Grant told the Jamaica Observer yesterday that the employee was asked to fill in for another worker, but he told the company that he was unable to do so as a Seventh-day Adventist.In a release yesterday, communication, public affairs and religious liberty director of the Jamaica Union Conference of Seventh-day Adventists, Nigel Coke said the church was appealing to employers in the private and public sectors to respect the constitutional rights of workers to enjoy freedom from religious discrimination. From Jamaica Observer, “Trouble averted at Petcom.”

This is a companion discussion topic for the original entry at http://spectrummagazine.org/node/8905
webEd (Website Editor) Closed December 22, 2018, 9:11pm #2