Some like her must believe that it was the devil prompting the seduction of these men; it’s always the woman’s fault–even when she was raped!

No need to “go over Laurel’s notes”… it is the same thing she has repeated over and over again at least since she published a chapter in the book against WO that came out… when?.. at least 30 years ago… maybe 40.

It is, btw, the type of thing that caused many to turn from being opposed to ordaining women to seeing the false reasons for their positions and breaking away from this kind of nonsense. So now you begin to see the reason for the reactions of some at TOSC who formed a group that was midway between the original pro and con groups.

If the rest of the presentations that caused the revulsion in some who were formerly anti-WO are going to be repeated here, what we’ve seen reported so far is very mild indeed… stay tuned… and do fasten your seat belts. But the net results of this conference… if they are the same as this type of presentations at the TOSC… will only result in more and more who see the error of their messages.

She just missed the opportunity of following the commandment, that women should be quiet in church and not even teach…

Basically, from behind a pulpit she defended the idea that women should not talk … from behind the pulpit…

I don’t think this issue will be solved anytime in the near future. The days of the Sabbath Conferences where agreement reigned are over. I think Amazing Facts would be more productive if they taught ways for our congregations to reach out to the sick and the poor in their communities.

Elaine, you just missed the opportunity of eating those delicious lunches that @elmer_cupino offered you…

I would hope so, too, Birder…as it really doesn’t help the cause of the Anti-Women ordination’s cause at all.

Ironic…isn’t it, George? I hope that she obtained her husband’s permission to speak first

Did Elaine take up my offer? She been awfully quiet.

Have you been watching those videos from the seminar? Wonder what those 'keets would say?

“The issue is hermeneutics…”

Damsteegt is correct in this observation - the conclusions we draw from Scripture are all a function of how we view and read it. However, I disagree with her notion of a “plain reading”; an “ideal-type”, that doesn’t exist or is not available within the immanent frame within which we human beings operate. The fallacy of Damsteegt’s approach is that she abstracts biblical truth to such an extent that human experience, both of the writer and the reader of the text, becomes irrelevant. Such a “plain” ideal-point of view is not accessible to Damsteegt, nor for any other, except God himself. The Bible is not written in an abstract metaphysical language, but in culturally conditioned human languages, and it has to be interpreted on this basis.

In contrast to Damsteegt, Dr. R. Davidson claims in one of his papers that current SDA hermeneutics is based on the historical critical method, except for its supernatural bias - i.e. the historical -grammatical method. Furthermore, Dr. N. Miller claims in one of his epistemological papers that the Adventist hermeneutic tradition has its roots in the notion of commonsense philosophy of the Scottish Enlightenment - i.e. a non-foundationalist and anti-fundamentalist position.

Damsteegt’s hermeneutics is therefore very different from the “Seminary-position” of Davidson and Miller. She can best be explained within the tradition of fundamentalism and biblical inerrancy, that entered the Church through its close connections with the Fundamentalist movement under A.G. Daniell’s regime - in the 1920’s. She seems to claim that Davidson and Miller “reinterpret” Scripture, based on human experience…".

Damsteegt’s hermeneutics can therefore be labeled as “naive biblicism” - naive in the sense that she operates from an impossible premise, leaving behind the human factor.

Jared, thanks for the excellent reporting on this symposium. How many do you estimate were in attendance at this first session? Can you give us an idea of the makeup of the audience as to gender and age? How many did you recognize as church employees? It would also be of interest to know the comments you have overheard to gauge the reaction of the audience

Thanks again for reporting this event.

The basic error of spiritualism is trusting feelings, impressions, and sensate evidence over the Word of God. That’s what got Mother Eve in trouble at the forbidden tree. It’s what got King Saul in trouble in the cave of the witch of Endor, and what deceived Bishop Pike into believing he was communicating with his dead son.

Beyond the issue of what happens at death, the essential premise of spiritualism is that the Word is not always to be trusted, and that experience and subjective spirituality can transcend God’s written counsel. That is the fundamental reason why the principles of spiritualism are operative in the current ordination controversy, and in other denominational controversies as well. Put simply, the core of spiritualism is experience-driven theology.

I will be addressing that point tomorrow afternoon at 4:30 Pacific time, in my message titled, “Counterfeit Spirituality, Counterfeit Salvation, and the Ordination Controversy.”

Ill look forward to watching once its uploaded on you tube.

SPECTRUM. DO a review article on Pastor Paulson’s presentation.

I just tried to “like” your comment & the system says I’ve exceeded my daily limit of liking!

(It’s an issue of how the software works not some policy-central. It is my understanding that as a commenter participates more their “level” increases and Discourse allows them more “freedom”. Just what that entails (like doing more likes) I do not know. Maybe they just don’t want likes to be devalued, like currency. - webEd)

Damsteegt closed by confessing that she had felt drawn to ministry, and so she worked alongside her pastor husband, aiding his work, she was careful to add, in accordance with Scripture.

This reminds me of the Parable of the Talents & the servant who buried his talent—out of fear of the master.

I find this Damsteegt family photo reminiscent of the Gothard principles in the illustration below. The wife kneeling, the husband in position of privilege & holding a book symbolic of teaching. 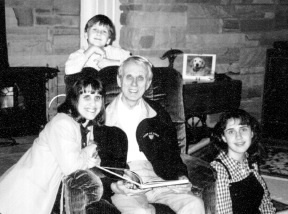 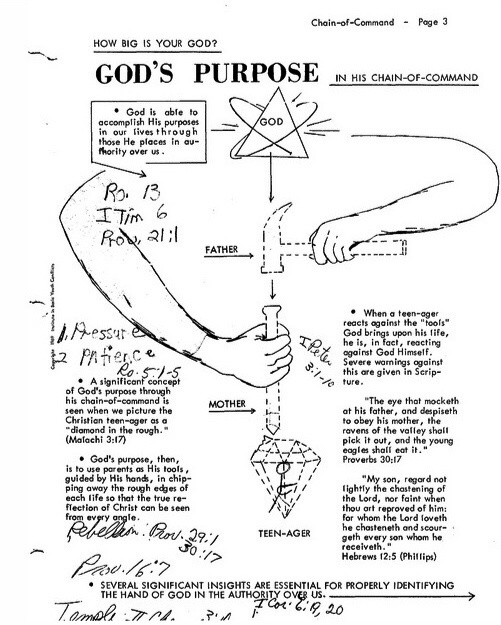 her so-called plain reading of Scripture would not allow her to stand there and teach male listeners. What is it that makes her so blind?

The advancement of women was championed by many religious groups including MIllerites and Adventists who had no connections to spiritualism. In addition,

So why the supposed link between spiritualism and women’s rights?

Now who’s making false claims? You’ve misrepresented what Mrs. Damsteegt said. She was linking Feminism to Spiritualism. Among those opposed to WO, I know of no one who is against the advancement of women or women’s rights. But Feminism is not the same thing. Maybe you’ve forgotten the 70’s or weren’t around then. Radical feminists don’t just want equal pay for equal work (a legitimate goal); they want all differences between the sexes to be ignored or denied, and the most radical among them have a hatred for men. Don’t ask for references. I don’t keep files of every thing I’ve read over the past 40 years.

You’re accusing someone who helped her husband in his ministry of hiding her talent? How dare you make such unwarranted claims? Who made you the judge?

You’re accusing someone who helped her husband in his ministry of hiding her talent? How dare you make such unwarranted claims? Who made you the judge?

You sound a wee bit intense. The Parable of the Talents teaches against the male hierarchical claims that a woman can be gifted, but must nevertheless not exercise all those gifts. Her calling isn’t even to be trusted.

What if EGW had turned down God’s call in order to “help her husband in his ministry”?

The Parable of the Talents teaches against the male hierarchical claims that a woman can be gifted, but must nevertheless not exercise her gift.

What if EGW had turned down God’s call in order to “help her husband in his ministry”?

Wow, that’s a new twist on the parable of the talents. A bit of eisegesis, maybe?

You’re comparing figs with fettuccine. EGW was called to be a messenger of the Lord, a prophet. She never made claims of being a minister or an elder. And, contrary to false claims often made here, she was never ordained as a minister. She, in fact, recommended that the wives of minsters work along side their husbands, but not as ordained minsters or elders. She also recommended tha,t under certain circumstances, they should be paid for their work.

If indeed the link was made between WO and spiritualism / satanism - if only by implication, I am surprised at the modesty of reaction in this thread.
I am a child of God - not a child of satan. To be demonized (here apparently quite literally) for some positions I hold and believe to be biblical, is beyond any basis of further discussion. It would be an insult to Damsteegt’s intelligence to assume she did not consider the implications of her line of thought.