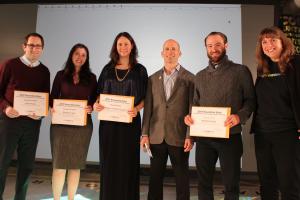 In this week’s news round-up, a math teacher at Monterey Bay Academy has won the $25,000 Rosenthal Prize for Innovation in Math Teaching, a Loma Linda assistant professor of pediatrics removed a live sea snail from an 11-year-old boy’s elbow, and General Conference President Ted Wilson traveled to Uganda where he met with the Ugandan president and local clergy on various issues.

Monterey Bay Academy Math Teacher Wins $25,000 Award for his Teaching. Matt Engle, who teaches math at Monterey Bay Academy, has received the 2017 Rosenthal Prize for Innovation in Math Teaching, established to recognize and promote distinguished, hands-on math teaching. Engle earned the $25,000 award for his lesson titled “Bringing Similarity Into Light: Experiencing Similarity and Dilations Using Shadows.” The lesson examines the shadows of shapes to explore concepts such as ratio, dilation, and proportionality in triangles. Engle said he strives to make math exciting and fun for his students and to answer the age-old student question, “When am I going to use this?…The answer is, you’re probably not,” he said. “The value is growing ways of thinking your brain will use forever. My goal is to help students realize why learning math in school is a valuable thing for them.” From Register Pajaronian, “Teacher adds to his résumé.”

Loma Linda University Professor Removes a Sea Snail from Boy’s Elbow. Albert Khait, an assistant professor of pediatrics at Loma Linda University, removed a sea snail (identified as a checkered periwinkle (Littorina scutulata)—and apparently still alive) from the elbow of an otherwise healthy 11-year-old boy a week after he fell and scraped his elbow in a tide pool at a California beach. The patient "was visibly excited about the surprising discovery and requested to keep the specimen so he could share the story with family and friends," Khait wrote in his report. From Science Alert, “A Sea Snail Was Found Living in a Boy's Skin After a Trip to The Beach.”

Uganda President Museveni Agrees to Have School Examinations Moved from Saturday. President Museveni has agreed to have school examinations moved from Saturday, the official day of worship for the Seventh-day Adventist Church (SDA).Museveni was speaking during a meeting with the visiting SDA Church World President Ted Wilson and his wife, Nancy. The SDA leader was in Uganda for a four-day pastoral visit.The meeting was attend by the Uganda SDA Union President Daniel Maate along with leaders from Kenya, Rwanda, Burundi, Tanzania, and South Sudan, among others. Museveni said that more measures would be taken to cater for the interests of other Christian denominations that need to be freed from school examinations on Sundays and also for the Muslim community on Fridays. He said that the remaining four days of the week would be sufficient to address examination needs in the country.Wilson saluted President Museveni for ensuring freedom of worship for all faiths in Uganda. From NTV, “President Museveni agrees to Seventh Day Adventist Church's request to cancel Saturday school exams.”

President Wilson Counsels Ugandan Clergy to not Preach Politics from the Pulpit. Seventh-day Adventist Church President Ted N.C. Wilson has expressed his opposition to clergy preaching politics from the pulpit. In a sermon before a large gathering of Adventists in Kampala, Uganda, Wilson said that pastors should not engage in church politicking. "It is against our code of ethics as SDA to stand on the pulpit and start to campaign for someone," said Wilson. "Telling them to vote for this one or the other, support this policy or the other. Our work is to preach to the people and show them the right way to heaven and not involve ourselves in politics." Wilson is not the only Christian leader to be critical of church politicking. A 2017 National Association of Evangelicals survey claimed that about 90 percent of evangelical leaders oppose clergy endorsing politicians from the pulpit, though the survey was a non-representative sample. "Most pastors I know don't want to endorse politicians. They want to focus on teaching the Bible," stated NAE President Leith Anderson last year. The Ethics & Religious Liberty Commission of the Southern Baptist Convention has also been critical of pulpit endorsements, both under former president Richard Land, who is The Christian Post's executive editor, and current president Russell Moore. From The Christian Post, “Seventh Day Adventist Church Head Tells Pastors Not to Preach Politics From Pulpit.”

This is a companion discussion topic for the original entry at http://spectrummagazine.org/node/8590
vandieman (jeremy) February 26, 2018, 9:13pm #2

this is all fine and well, but i wonder if TW believes that clergy should refrain from church politics, especially outside of the pulpit…if clergy is politicking with church politics outside of the pulpit - in GC meetings, annual council, etc. - why shouldn’t they preach civil politics from the pulpit…after-all, our civil politics reflects our religion, does it not…shouldn’t congregations know where their leaders stand on issues of the day…i believe our pioneer church knew very well where our prophet stood on liquor laws and the return of black slaves to their white masters…