We mourn with and pray for those whose lives have been irrevocably changed when a gunman opened fire yesterday at the Robb Elementary School in Uvalde, Texas, killing 19 students and two adults. This marks the deadliest school shooting in the state's history and our hearts cry out in anguish and anger against this evil act.

the only way to pass gun safety laws is to diminish the influence of the NRA, and the only way to diminish the influence of the NRA is to vote the dems in, and the GOP out…there’s no other way…GOP candidates are beholden to the NRA for campaign contributions…they can’t raise enough money without the NRA…this is why they can never vote against what the NRA wants…

of course the dems do have their issues, and huge dem majorities in the house and senate could be scary for some…but to deal with the NRA, and pass gun safety laws, this is what’s needed…

Just as Nixon, a Republican, the party that saw itself as standing firm against Communism, opened up U.S. relations to China in the 1960s , I think it would take a Republican effort to address current right wing attitudes about gun use. I’m not holding my breath.

Maybe the “right to life” the Republicans chant should include the right to not get shot by some loon-bag with an AK47.

I can’t see how someone can claim to value the sanctity of life and oppose gun control. I think our church should take a decisive stand as saving lives is a Christian value.

“Automatic or semi-automatic military-style weapons are becoming increasingly available to civilians. In some areas of the world it is relatively easy to acquire such guns. They show up not only in the street, but in the hands of youngsters at school. Many crimes are committed through the use of these kinds of weapons. They are made to kill people. They have no legitimate recreational use.”

This is not true. Automatic weapons are illegal. “Military-style” is a misnomer. Hand guns with shoulder attachments does not make it a military style. Holding military styles next to public allowed firearms shows complete differences and their functioning is not near similar. Toys can be made to look like firearms but their functions are not the same.
This is not meant to minimize what took place in the Uvalde tragedy. It is too bad the demented person was able to get into the school and it is too bad a trained and armed teacher or staff was not available or prepared.

We must search our souls for ways we can stem the tide of violence and implore our elected officials to take action.

We must start with the foolishness of letting violent offenders out of jail and off easy. See New York, Chicago, California, Oregon, and Washington state for most of the foolishness. The government is much of the problem and some of the people, but never the firearm.

The question is how to make gun safety laws that do not infringe on our Constitutional right. The problem is how to keep guns out of criminal and lunatic hands. How do you do that? Guns are illegal in Chicago but how are the deaths by guns explained? It isn’t the good citizens doing the killing.
Good citizens are good to own firearms.

Folks, guns kill, its simple. 2nd amendment was about militias, back in the day! Why would someone who claims to be a Christian need an AR15? Why would you walk around “carrying “ a hand gun? We’re God’s precious children, we don’t need guns! Why are we clinging to the 2nd amendment? Our country has the largest number of mass shootings of anywhere in the world!

Who is a safe person? Both the Buffalo and Uvalde murderers had no criminal record. Everyone is a sinner, as we know so well, but each person is deemed safe until something happens inside him and he (and in this case, when has it not been a “he”?) chooses to become a killer. The data are clear: other countries, such as the UK and Australia, clamped down on who could have a gun as soon as there was a mass killing, and they have had no more such killings. But not the US, and we keep having them, again and again and again… It is also important to work on changing our society so that the young people have a sense that it is fair and they have a future worth having here.

Canada is now proposing to clamp down on any further hand-gun ownership…the senselessness of Uvalde, and the obvious problem of a just turned 18 yr-old able to purchase and use assault weapons like he’d buy and drink pop, will likely enable Canada’s Liberals to illegalize hand-guns…

Canada is trying very hard not to be like the U.S. when it comes to guns…

You have asked a good question. So often some jump to the weapon as being the problem as if the weapon has some inanimate powers. Consider these correlations that are a recipe for not only lunatics that attack at schools but also a destructive path for humanity.

The making of a school shooter, correlations listed:
Start with a boy, then,
Take away his father,
set him in front of a video screen all day with endless content, give him no moral formation, no guidance, no companionship, isolate him.
And as he develops mental and immoral weaknesses, odd behaviors, then give him Psychotropic drugs. Add to this, no God, no structure, no religion and a single parent home, absent parenting, an absence of God’s family design.
Now he has developed hopelessness and becomes desensitized. He lacks empathy.

This is the source of the problem.

Notice the inclusion of commas. Militia is one part and the right of people to bear arms is another part of the paragraph in the amendment.

A well regulated Militia, being necessary to the security of a free State, the right of the people to keep and bear Arms, shall not be infringed.

It is this simple.

the real question to consider is whether there’s any scope for a militia, given well-established police forces in every city and a national military that provide for the security of the state at the expense of tax payers…if there isn’t any need for a militia, the 2nd amendment is really saying that there’s no right to keep and bear arms…

…This is the source of the problem.

Do you have reputable source to back up your claims that these are the things that create a mass-murderer?

A mass-murderer rarely if ever uses a hunting knife. Or a bow and arrow. Or a flintlock.

6 charts that show the rise of guns in the U.S. — and people dying from them

Data shows how the gun landscape has changed in the last decade.

Opinion | There is no constitutional reason to oppose gun laws (no matter...

Like virtually every right and prohibition in the Constitution, the right to keep and bear arms is subject to legislation that defines and regulates its application.

Why does ANY God loving, Christian, want to own a weapon of war?
It’s right to make guns available to everyone, so they can kill children, really?
Shocking and evil! 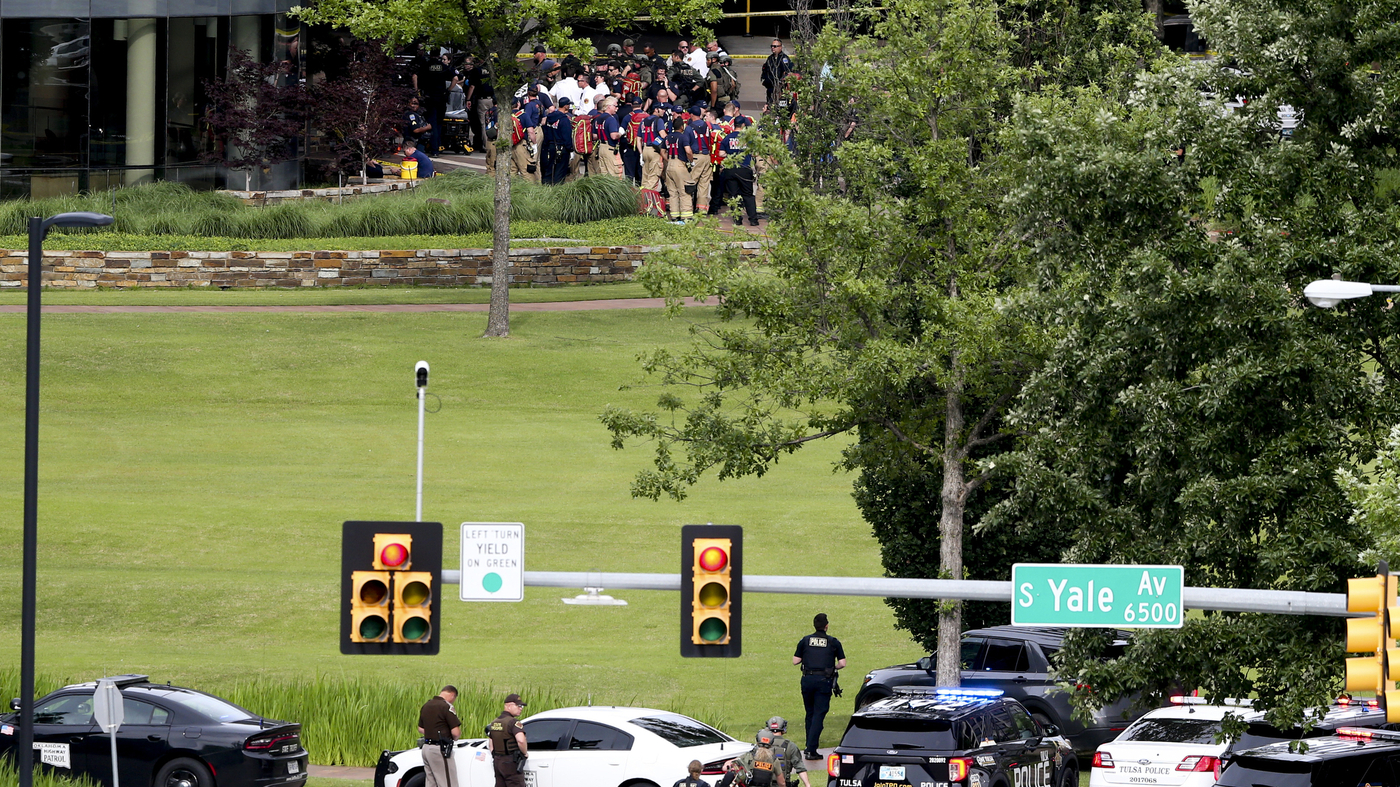 5 people dead at Tulsa medical building, in the 233rd mass shooting of 2022

"Four innocents and one shooter" are dead, says Jonathan Brooks of the Tulsa police department at a news conference on Wednesday.

Can a law be made that all criminals may not have possession of a gun?

These are simple facts documented in numerous ways. So, the answer is yes. There are things we can do to reduce this carnage. It won’t stop all the killing because there are way too many guns in this country so we will never be like most civilized nations and we will always suffer 30 to 40 times more gun deaths than the Europeans, but we can and should, at minimum, pass background checks, outlaw magazines that hold more than 10 rounds and limit purchases only to people over 21. That alone would have stopped several of these latest killing sprees including the ones in Buffalo and Uvalde.

Why would someone who claims to be a Christian need an AR15?

This is exactly the point each CHRISTIAN should be asking themselves. Either you trust God to protect you or you trust yourself. If you’re trusting yourself, then you don’t have enough faith to trust that God will provide. That doesn’t mean you won’t suffer injury or even be killed by a gun. But it means that your trust will be rewarded in the future. This is what Christianity is about, and any half hearted attempt at taking things into your own hands is a demonstration that your faith is lacking…sorry, but that is fundamental Christianity 101.

Before I retired, I posted a sign on my wall for the right-wing wackos in the office next to me to read when they entered my office. It made a simple point about this issue.