Neighbors on the Blue Marble 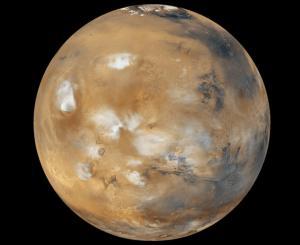 Much ado has been made about the Mars "discovery" of liquid water. Of course, it can't be confirmed yet because of our fear of contaminating any sources of water with life from Earth. Knowing that any observed life is actually native to Mars is very important because, well... It'd be a major discovery--life on other planets!

It sounds like something humans would and should be excited about. Even if the life is microscopic, knowing that earthlings are not alone would be an amazing feeling. Or would it? I often wonder about this obsession with finding life on other worlds. To me, humanity's curiosity is especially puzzling with regards to intelligent life. Knowing we have "company" may appear to be a great thing, but we can't even get along with our fellow tellurians. As I look at the ways in which we relate to one another--the mistreatment of Syrian refugees, the despising of immigrants to America, racism, xenophobia, the conflicts over borders and land, etc--I wonder why we would even bother trying to get to know extraterrestrials. Do we honestly believe that we would get along with them better than we get along with each other? Would we expect relationships to be peaceful when we can't even have peace among our own species?

Of course, the questions posed above are not the same for the Christian. We aren't wondering if we are solo travelers in the universe: we already believe that "we are not alone".  But interestingly, the same philosophical considerations were posed to followers of Christ long ago. In I John 4, we are told, "If someone says, "I love God," and hates his brother, he is a liar; for the one who does not love his brother whom he has seen, cannot love God whom he has not seen." Much like those searching the galactic heavens to know other life forms, we turn to the God of Heaven longing to know our Creator. But both pursuits seem futile when we can't relate well to those around us.

We forget that we are all one people. We have the same desires for love and security and wellbeing of our families. And while we may not go around kicking children or tripping fathers, we in our own ways dehumanize others and downplay the similarities with those we consider "not like us".  Even within our own denomination, we magnify the variations in our faith. We polarize ourselves into "camps" and tear each other down. Are we suddenly enemies because we aren't both vegan? Does our ability to have a meaningful relationship really hinge on having the same interpretation of Revelation 13? Despite the multitude of points on which we agree, we act as if our differences are impassable gulfs between us.

Expending energy looking beyond ourselves is not a bad thing. However, let's devote some of that pursuit into looking at neighbors on the Blue Marble and reaching out to them as our brothers and sisters. "Jesus replied: '"Love the Lord your God with all your heart and with all your soul and with all your mind." This is the first and greatest commandment. And the second is like it: "Love your neighbor as yourself." All the Law and the Prophets hang on these two commandments'"

Courtney Ray is an ordained pastor in the Southern California Conference. She is also member of the Society for Neuroscience and does behavioral neuroscience research. She admires the fact that mathematicians insist on referring to popular ideas as theorems until a proof is established even if said idea has been commonly accepted for millennia.

of course there is intelligent life across the universe. because of sin we are quarantined until the return of Christ. That life is superior to ours. we are the failures. The little green men is us. tom Z

One of the primary reasons for the search for extra-terestial life is to show that evolution could occur elsewhere, and thus life is not so special, i.e., it is easy for it to occur spontaneously. This is a powerful motivating force, against theism. Scientist could then say, “See, life easily comes form non life.” So, this search is not a neutral endeavor.

So far, there has been no life evident anywhere in the universe except here. There is no life on Mars, and all the extra-solar system planets thus far discovered do not show any evidence of carbon based life (an oxygen rich atmosphere would be strong evidence).

I don’t anticipate finding evidence of life, though I believe the universe is pulsing with it. We just don’t have the tools to detect angels, etc., they have to reveal themselves as does God, to those wishing to find him.

If evidence did become clear, I think God would make it such that he would be glorified rather than the scientists.

Another question, is this lady an ordained pastor, or a licensed minister? If she is ordained, then the So. Cal. Cont. has gone beyond what I thought they had. I’m curious.

Finding life that dies on other planets might not be a big deal to most Christian denominations, but it would pose quite a challenge to SDAs.

There are many ordained female pastors in the NAD. Some of them are found on the NAD website:

Are we absolutely certain there is life on other planets that can see and watch us? Adventists believe that there is life that can observe us but where did that idea originate? What is the evidence?

There is NO evidence of life elsewhere. None. EGW seems to indicate that other inhabited worlds are watching us. But we do not have chemical or spectral evidence for them. They may be different than us, so that evidence that we know of for life here would not be seen with their life.

So, though the science shows no life elsewhere, I believe it is there, just not detectable at the moment.

If death was found elsewhere , it would mean that sin was elsewhere as well. A problem for SDA’s.

In EGW’s writings, one often comes across the term “unfallen worlds.” It seems to suggest non-angelic denizens of planetoids, like our Earth, but ones whom have not sinned, and who, by virtue of their sinlessness, have access to God directly.

This access gives them the conduit by which they can receive God’s pronouncements, a key one being the decisions of His ongoing Investigative Judgment.

That’s it. The problem with all of the above, though, is that none of this is in the Bible. I said as much in my Spectrum essay on the IJ, two years ago:

Something is odd here

Science refers to some ideas as hypotheses until the evidence is overwhelming, when they become Theories - such as the Theory of Evolution.

Mathematics refers to some ideas as conjectures until they are proven, and which point they become Theorems or Lemmas

A conjecture and a hypothesis are very similar concepts.

Courtney’s point, that we need to learn to get along with each other here, before we begin to worry about life on other planets, seems to have been missed, but it is an important one. I disagree with Shep, too, that the main reason we search for life on other planets is to prove the theory of evolution. I suspect it is much more related to the idea of not being alone in the universe.

Adventism is always at risk around science. Let’s make that clear right up front.

It is most probable that life and death exists infinitely throughout the universe and likely science will find it. One only need to spend a few minutes outdoors without light pollution to understand and know this. If one has a paradigm that rejects this then it is problematic, if one doesn’t buy the Mosaic legend of creation and the surrounding dependencies then life outside a few hundred miles of our planet is completely compatible with our view of the universe. Whom it glorifies is not the point. What is the point is that we can start to glimpse the fuller nature of the universe and maybe learn to become better stewards of our own planet.

I like what was clearly pointed out: Adventist universe theory is not Biblical in much of its’ detail. The sooner we learn this, the better we will be more relevant dealing with the human condition.

If a report came that scientists saw angels on mars some would not believe it, they would want evidence. Others would only believe if you capture an angel and present the angel for viewing and questioning. Some would only trust a report if it came from a trusted accredited scientific institution. I trust the report and record of scripture which make sense to me, especially in the context of the great controversy over the character of God. Has cosmology explore the vastness of the universe I am excited thinking of what God has created elsewhere.

The evidence of other intelligent life is pervasive through out scripture. In the Revelation of Jesus to His servant John we are told that " there was war in heaven: Michael and his angels fought against the dragon; and the dragon fought and his angels, And prevailed not; neither was their place found any more in heaven. And the great dragon was cast out, that old serpent, called the Devil, and Satan, which deceiveth the whole world: he was cast out into the earth, and his angels were cast out with him." Rev 12:7-9

We see this same serpent in the Garden of Eden influencing humans " And the serpent said unto the woman, Ye shall not surely die: For God doth know that in the day ye eat thereof, then your eyes shall be opened, and ye shall be as gods, knowing good and evil. "
Gen 3:4-5.

Has Seventh Day Adventist we accept the biblical record has revelation from God particularly the testimony of Jesus Christ whose life, death and character ties the bible together. Evidence is presented by our Lord and saviour Jesus Christ, who affirmed the existence of angels. And he said unto them, I beheld Satan as lightning fall from heaven.
Luke 10:18

Not only do have recorded evidence that other life exist but they are actively involved in human reality.

Some scientists assumes too much and others not enough. We can come to a conclusion that is incorrect though our logic is sound, because the premises upon which we build our ASSUMPTIONS is simply wrong. It amazes me how some Christian scientists abandon and even fight against basic revelation in scripture because it does not matches the assumptions of secular though.

For by Him all things are made that was made both in heaven and on earth.

The Bible mentions angels many times; and they are intelligent. But where does the Bible mention beings other than angels. Where has there been evidence that there are other “beings” like us; or that they are involved in judging us?

Agreed, that many assumptions have been made based on EGW’s vision where she reported seeing "tall, majestic beings on a planet in or solar system. But now that many of the planets have been examined by U.S. space travel and there is absolutely no signs of such beings on any of them.