South Caribbean Conference President Decries Carnival, Affirms Heterosexual Marriage. Pastor Leslie Moses, president of the South Caribbean Conference of the Seventh-day Adventists, led hundreds of members from over 150 churches in a march to a Morality and Temperance Rally at a large stadium. “This march is to affirm heterosexual marriage and the family," said Moses. “What happens at Carnival, the lewdness and immorality, can not be God’s will. I declare that Carnival is madness. There can be no justification for people dressing and acting like that,” declared Moses. "We are also marching against any activity that is not in keeping with the Word of God, intemperate living including murder, crime, adultery, drug abuse and child abuse,” he said. From Trinidad and Tobago Newsday, "Adventist Pastor: Carnival is Madness."

Cayman Academy Students Raise $3,389 for Cancer Society in Annual Cancer Walk. As the culmination of the school’s annual Cancer Awareness and Health Week, Cayman Academy students raised $3,389 for the Cayman Islands Cancer Society in their annual Cancer Walk. Led by the Gideon Marching Band of the Savannah Seventh-day Adventist Church, students and teachers, many dressed in pink, walked from the school on Walkers Road to the Cancer Society next to the Cayman Islands Hospital. Walk organizer Sophia Hamilton, a pre-kindergarten teacher at the academy, said the fundraiser is one of the ways the school teaches students about the importance of empathy and caring for their neighbors. From Cayman Compass, "Students raise $3,389 for Cancer Society."

North Carolina Adventist Congregations Partner Help Meet Community Needs. In North Carolina, the Wilmington Seventh-day Adventist and Ephesus Seventh-day Adventist churches distributed 186 Bags of Love to children, birth through age 17, who have had to be removed from their homes by Child Protective Services. Made from donated fabric, each bag is filled with a handmade comforter, several stuffed animals, a brand new toy, personal care items, and age- and gender-appropriate items like coloring books and games. Carol O’Heffernan co-ordinates the Bags of Love ministry which began in 2013. Each year at Christmas the Ministry receives a year’s stock of brand new toys through the “Toys for Tots” program and the Salvation Army. From Star News Online, "Bags of Love helps kids going into foster care."

Refreshing to see a leader still willing to stand for principle.

it seems like our caribbean churches are really into political action…

it seems like our caribbean churches are really into political action…

It seems like the SDA Caribbean churches (or their leaders) are really into fueling hatred, antagonistic social attitudes such as equating people having fun with ‘madness’, and talkin’ smack about anything they don’t understand.

Since when is speaking out against worldliness equated to fueling hatred? I guess Christ would have been accused of doing the same thing.

Last night I read the report on Pastor Leslie Moses condemnation of Carnival. I must admit I become deeply concerned when Protestant churches hold public meetings in an area where such remarks inflame and fuel an already volatile population where it comes to gay rights and the protection of gays. I remember reading a few months back the BBC’s article on violence against gays in Jamaica (BBC: http://www.bbc.co.uk/news/world-latin-america-29714586)

I dropped off an email to my friend in London - a gay man of Caribbean origin, and found his reply helpful in throwing light on the origins of Carnival, as well as he himself emphasising the life threatening situation faced by gays as a consequence of Protestant ministers joining in (through volatile sermonising) with thugs who are intent on only one thing - bringing violence and sometimes death not only to gay men and sometimes women, but also to the families of people with an alternative sexuality. I question the true intent of Pastor Leslie Moses - his knowing full well the situation in the Caribbean. He must surely know that a percentage of Seventh-day Adventists are also gay in the Caribbean - probably the same percentages as found elsewhere in the world.

Here is my friend’s reply to my concerns:

"Pastor Leslie Moses ought to know that Carnival has nothing whatsoever to do with same sex, marriage or homosexual love, instead it is an adaption of the carnival tradition brought to the Caribbean and elsewhere by European Catholics and adapted by the slaves to celebrate a moment of freedom from their white masters. It began as part of the preparation for Lent; carnival is a corruption of carne vale, Latin for ‘Farewell to Meat’, and meat here has two meanings - the other being farewell to flesh, and in Europe the end of winter and the coming of spring, so it is also a joyous letting down of hair before entering the sacrifice of the Lenten season.

As a man of Caribbean descent and a former Catholic, as well as a gay man who is married to another man in a partnership of 42 years standing, I love Carnival in Trinidad. When I’m at home in St Lucia we fly over to Trinidad for Carnival as often as we can, and the whole island, all of its various ethnic and cultural mixes, takes part. So prominent has it become, so well recognised, that the most famous Carnival designer Peter Minshall was chosen to design the opening and closing ceremonies for the Barcelona Olympic Games.

The Caribbean islands have a long history of tolerating homosexuality provided it is kept under wraps, especially in the Catholic islands such as Trinidad and St Lucia. Instead it is in the Protestant islands like Jamaica, (my family homeland), and Barbados, that gay people are routinely harassed, persecuted, and killed. Jamaica is quite possibly the most homophobic society in the Caribbean, the most dangerous place in which to be gay, where pastors and ministers routinely deliver hell fire and damnation sermons that encourage gangs of men and women to seek out gay men on the street, and sometimes gay women too, and beat and stomp them to death. I have lost three friends to this sort of behaviour which the churches’ bigotry encourages and I no longer go back to see my relatives there as it would be far too dangerous for me and them. Ironically, given that we are talking about Christian homophobia, it was the Catholic Jesuit Mission in Kingston that first brought the problem to the world’s attention when no one would listen to what Jamaican gays had to say, so kudos to them.

Sadly Protestant churches fall silent on the rights of LGBT people - they have nothing positive to say about us. They have done enough damage to us since the dawn of the Christian era and we will no longer allow that to continue."

No, he was partaking at a three day feast of marrying - guess , what they did all these 72 hours !

My wife and me for ourselves had a very silent, remote wedding - not those boring, pseudo - funny “festivals” they conduct here usually…Better do nothing tha be bored, just eagerly watching to keep a smile.

Just some years ago there was a wedding in our church. The bridegroom also was playing in a band cultivating Irish music. He had invited the band as guests.

Then one newly baptized, very serious, highly educated very intelligent young lady suggested : “Now let`s dance !” and the band begun to play and the young ones begun to dance…

It was a joyful experience, even for us aged ones to just look. at. See Jeremy 31, 13.Are you ready for this feast ? Or do yo stillfear to be estimated as “crazy” because of your joyful moving ?

As someone who has frequently traveled in the Caribbean area, dancing celebrates joyous occasions. Jews always dance just because they enjoy it.

Did you ever watch the faces of young and old when dancing? They are happy, smiling, laughing. To prohibit such beautiful expressions is to become so rigid as to live in a gloomy world indeed. Children at the smallest age love music and rhythm. Only those who have been taught of its sinfulness, have begun to drive joy out of their lives. Is this the religion God left us?

My then three years old boy wanted to knw what`s in my headphones It was the “Requiem” of Mozart. He spontaneosly invented a choreography. Once I experienced the choirmaster of a local synagogue : He sang and danced - well, just like David - that were really holistic praise songs.

Did you ever see this poem Elaine? 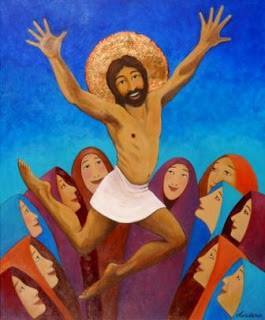 The poem comes from the Iona Community’s songbook the ‘Enemy of Apathy’ and was written by John Bell and Graham Maule in 1988. I have left out the last four lines of each verse; the excitement is lost in the second paragraph of each stanza.

So here are the five verses of the ‘edited’ poem. It is for a contemporary people. The poem moves beyond the post-modern mind and Jesus emerges in our own time - speaking the language of certainty, beyond any church or religion. In my opinion it is a lovely poem - and it speaks to me emotionally as well as intelligibly - if I may put it that way.

I guess if Jesus was amongst us today - as I believe He is - you will find him amongst those at Carnival. If you search for Him with all your heart and soul.

I doubt you will find Him walking at the side of Pastor Leslie Moses in a march to a Morality and Temperance Rally - that was never His style.

Jesus Christ is waiting,
waiting in the streets:
no one is his neighbour,
all alone he eats.

Jesus Christ is raging,
raging in the streets
where injustice spirals
and all hope retreats.

Jesus Christ is healing,
healing in the streets
curing those who suffer,
touching those he greets.

Jesus Christ is dancing,
dancing in the streets,
where each sign of hatred
his strong love defeats.

Jesus Christ is calling,
calling in the streets,
'come and walk faith’s tightrope
I will guide your feet.

What a beautiful and reflective poem. Poetry expresses what prose can not; just as paintings and the visual arts speak to the soul.