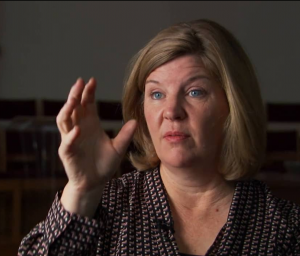 In a new video produced by Spectrum Media, Pastors John Brunt of the Azure Hills Church, Chris Oberg of the La Sierra University Church, and Randy Roberts of the Loma Linda University Church reflect on their experience as members of the General Conference Theology of Ordination Study Committee (TOSC). The committe of 106 members met several times over three years to address the absence of a theology of ordination in the Seventh-day Adventist Church. This film tells the behind-the-scenes story of TOSC that has been thus far hidden under a bushel. No longer.

This is a companion discussion topic for the original entry at http://spectrummagazine.org/node/6892
7 Likes
cpossenriede (Charles Possenriede) June 30, 2015, 2:12am #2

“You can’t hold back the dawn.” Excellent!

What a beautiful, beautiful herstory. I would like to make an appeal to our church as it meets next week to vote on Ordination Without Regard to Gender. For those who might have forgotten, yes the term is “without regard to GENDER.”

As a transgender person, I pray that our cisgender brothers and sisters do not forget that we are included in the term “gender.” Gender is not a binary, two-part term. There are many, many types of gender and we should all be welcome to serve.

As this issue is put to the different parts of the church everywhere, I hope that it will spread like wildfire that the Seventh-day Adventist Church will ordain us all without regard to our genders so long as we are willing to serve together for the Kingdom of God.

I’m sure that many womyn and men will argue that the ordination of womyn is enough and it stops there. But it would be a grave injustice to so many of us if it does. A threat to justice anywhere is a threat to justice everywhere, and accepting a small piece of justice but closing the door to the rest of us is harmful and wrong.

“Ordination without Regard to Gender” includes all of us without regard to gender and is not reserved for just the cisgender. But the church is tightening up against diversity of belief (Creationism). Our church is already inclusive when it comes to marriage and now the fundamentalist wing wants to redefine marriage to exclude same-sex partners. I weep at this change!

Womyn, the temptation will be to claim that you do not want to ordain transgendered persons in order to somehow gain acceptability. That “go along to get along” mentality is what led to your exclusion from ministry in the first place. Don’t take your right to be ordained and turn around and exclude us out of fear when we are standing in support of you. Bring us with you!

The Renewing of your mind through christs Jesus brings us into a character of meekness humbleness and patterning our encounters in the way God did.
1 Peter 2:23
When they hurled their insults at him, he did not retaliate; when he suffered, he made no threats. Instead, he entrusted himself to him who judges justly.

Great video.
Unfortunately it is the story of one of the saddest events in the SDA Church. It illustrates how manipulation works in our beloved Church.
What a maneuver it has been!!!
What’s next?

Well done…eventually the stones will cry out. 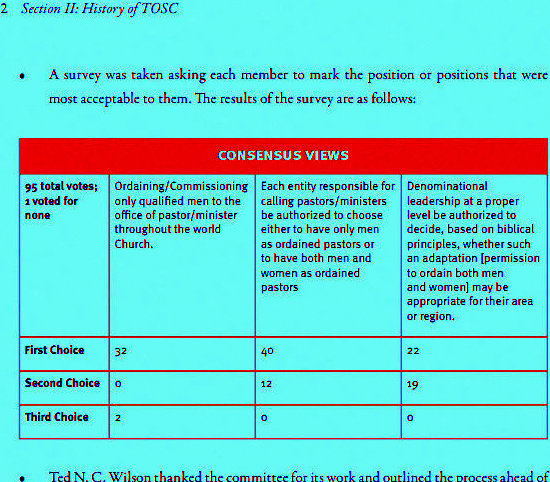 I am happy that these 3 are talking. Very courageous! They can’t hold back the dawn but they (not those 3) have been able to cover the light for quite some time now, because we let them.
The second group is somehow not consistent, but at least they were willing to let the divisions decide themselves.
What I find is incredible is that there was spent a whole lot of time and money and in the end the outcome did not make any difference, not even a recommendation. That is very inrresponsible and every manager would be fired for this waste.

Gender is not a binary, two-part term. There are many, many types of gender and we should all be welcome to serve.

"And He (Jesus) answered and said, “Have you not read that He who created them from the beginning MADE THEM MALE AND FEMALE,” Matthew 19:4

Our Lord Himself tells us that He created us male and female, not intersex, transgender and queer.

What a maneuver it has been!!!

Wasn’t that an amazing maneuver?

TOSC was given a task and as it began to be more evident what its findings could be, the committee’s standing and credibility began to be diluted where finally it ended up being a study group instead, with no official bearing. This maneuver reeks of Male Headship. After all this is nothing but another form of castration only a male specie can dream of.

credibility began to be diluted where finally it ended up being a study group instead,

As soon as TOSC was announced, I wrote several times (here) that it was just another “fake study group” with a fancy name that would result in nothing.
Man… what a prophecy thatone was!

Th GC (TW) apparently miscalculated it and expected TOSC to rule in their favor instead of just come up with the results of a study. But, as we saw, the GC (TW) had a “plan B” and applied it at the AC: dismiss the $1 mil “stuydy” results and just inject a question that they already knew how the world church would vote."

Bingo! And the infamous headshi (Stop this backhanded approach George. - website editor) thing will prevail for another few years. Women’s heads under the lid, and men sitting on the lid. What a picture!
(images deleted. - website editor)

Anyone feel comfortable inviting anyone to your Adventist church? 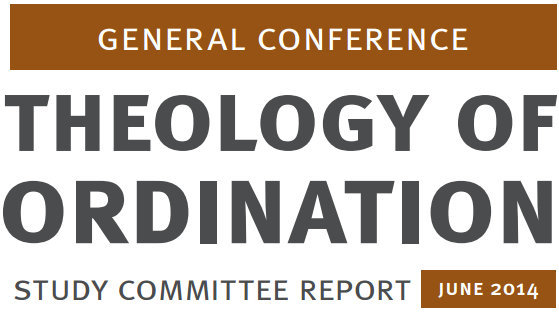 What’s that supposed to mean?

I have no idea. But the “trio” on the video can give you a pretty good explanation…
@elmer_cupino

Thank you for showing where this debate is headed if WO is allowed. You have clearly shown that what has been called a “specious” argument is indeed the next evolution in the ordination saga. No argument by any anti-WO group could have presented this any clearer.

“The next” would be an honest request of one of the delegates in SA to the president of the GC to show the bills. The TOSC had its costs and every accountable president should be so bold to stand up and say: “We have spent that amount of money for no results.” And every responsible delegate should lift his or her hand and say: "Mr President, you have not served your Church as a faithful and responsible servant. Pick up your stuff and hand the office into the hands of a more capable person"
This should be “the next” and and only after that we shall take the vote about WO. I think that the agenda of this GC session has just such a sequence.

Now that the California TOSC pro-WO contingency has spoken, how about a chance for the other side to have equal time?

No, they can give you a one-sided version of what it means.

Now that the California TOSC pro-WO contingency has spoken, how about a chance for the other side to have equal time?

Wouldn’t it be great if you turned in an article representing “the other side?”