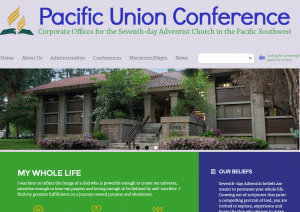 This should be no surprise to those of us who have long known the “West Coast Adventists” were leaders in equality and acceptance of all. Reading many of the comments here, much of the rest of the U.S. and especially the world, has a long way to go before acceptance of everyone as equal.

Bravo for the PUC, with the largest conference’s president as a representative delegate! To paraphrase Garrison Keillor: “All Our women are beautiful and above average.”

Hmmm, do you suppose they’ll let Sandy Roberts vote? I’m happy to say Bob and I started our ministry in Pacific Union, and specifically in SE Cal Conference.

I thought I had things straight in my head but I am confused again.

If the PUC can have roughly 50% women as delegates why is it that the majority of conferences won’t? The Church officially makes this statement about the underrepresentation of women:

A question that is certain to be asked when reading statistics on gender representation is why is the percentage of female delegates so small when it is perceived that women are in the majority as pertains to Church membership? The answer is simple. While efforts are continually made to ensure that the entire delegation shall be comprised of both genders, currently the positions from which these delegates are named and that generate the majority of delegates for the Session are held by males. This will change over time as more women are elected to leadership positions and Conference or Union executive committee membership.

Is there no real reason that the percentage of women is so low except for explicit choices made to do so? The PUC leadership is predominantly male, yet they can field a gender balanced team of delegates.

Am I missing something?

If she’s a delegate, they’ll have to let her vote; the question is whether or not she’ll vote as a conference president—but even they get only one vote. I wonder if this means that the conference is one vote short of a full delegation? Probably not.

Proud of this conference!

According to Pacific Union policy, all local presidents are administrative delegates, but when they get to San Antonio they are all just Union representatives. Why Sandra Roberts – or anyone else – was chosen by the union is of no concern to the GC.

This union is most accepting of God’s new order.

There will be all together 436 women delegates. If this percentage of 42% is applicable to all the unions from NAD, TED, SPD and EUD, then it is it.

“All Our women are beautiful and above average.”

Let’s see how CUC matches up. We have tons of beautiful women here too with no FS IQ less than 115.

Let’s hope they are all delegates!

Wouldn’t it be an interesting: and IQ test given to all delegates? Those who understand all they vote for?

This union conference in the NAD will have the least representation of female delegates.

This GC division will have the least representation of female delegates

I can’t wait for the official answers.

Double Jeopardy: What is the Lake Union

Final Jeopardy: What is the SID