After finishing my PhD in Australia in 1970, I obtained a Fulbright travel grant that brought me to the Sociology Department and Bureau of Applied Social Research at Columbia University for two years. I took the opportunity while there to audit two graduate courses taught by Robert Merton, who was then one of the best-known sociologists in America.

This is a companion discussion topic for the original entry at http://spectrummagazine.org/node/12155
7 Likes
robelle (Robert Lindbeck) January 5, 2023, 5:34am #2

Thanks @RonL for another insightful and informative article.

For some time now (pick your decades number) the General Conference has become increasingly irrelevant to the lived experience of divisions, unions, local conferences, local churches and individual members. When most believers in certain divisions support women’s ordination as a spiritually demanded gift not forbidden by Scripture or SDA history, and then watch the pathetic machinations of a GC Session which rebelliously insists that the entire world field must be ready, why would the GC be relevant? The spectacle of the presidency feeling free to staff the church at each session to advance a personal agenda, was attacked even by the Ellen White currently awarded near “ex cathedra” authority. Such leadership articulated with profoundly “spiritual” declarations never has served the believers and never will. Where the church is now seen as “thriving” is not in Silver Spring, MD.

The current GC administration is obsessed with its desire to end the ordination of women, and the whole compliance system was designed to control unions and conferences that have been convinced that God wants to use all available talent to heal the human mess.

is this article really current…my impression has been that the compliance committees are a thing of the past…in the most recent GC session, i didn’t pick up on any particular opposition to WO…it has seemed to me that WO is being tacitly tolerated…

Thanks Ron for such an insightful and candid article. There is so much hypocrisy at GC on Policy compliance issues. GCAS auditors have reported so many policy violations which GC Excom ignores. Only the WO policy gets pursued with vengeance. The Ted Wilson presidency is built on manipulating leaders in other parts of the world to ensure he stays in office. Unfortunately he has so much influence over the jobs of many and he instills fear.

Fascinating story. It’s an example of the classic tale of “The Emperor’s New Clothes”. I noticed it first when I was a teen. We did our regular sabbath school class where EGW was often quoted as an authoritative source. Then one evening at a youth vespers, I voiced certain reservations I had about some of her writings. Half a dozen others then admitting having similar doubts.

I had a similar experience years ago with my now ex-wife. We were both raised SDA, and went to church every week. Both my parents and both her parents were active in the church. We were married in a SDA church. I taught sabbath school; she led out with pathfinders and with the youth group. One day about 10 years later out of nowhere I mentioned a few of my doubts about official SDA teachings. I was surprised that she too had similar doubts, but was pretending to be a “28-fundamentals” believing SDA for my sake. I also was pretending to be a “28-fundamentals” believing SDA for her sake. It turned out both of us had been faking our SDA belief for a couple years already, not wanting to upset the other or to upset the tacit agreement we had when we got married that ours was to be a SDA family.

I have been told that Wilson has denied that he has gay family members. However, I have experiences that contradict his assertion.

Well, lying is fine if the end justifies the means, right? At least, I think that’s what Jesus said…

It is evident, given the declarations that have been issued and the foci of two other compliance committees, that the administration plans to ensure that no alternatives to the six-day creation that has been embraced as “correct” are presented in any serious fashion in Adventist academies and universities, and that churches or institutions do not become supportive of their LGBTIQ members and students.

Yep. The church is doing everything it possibly can to alienate younger generations, like me (I’m 56). This sort of stupidity shows they’re also willing to destroy our universities and turn them into bible colleges.

I have been told that unions where corruption is rife, where officials have climbed to high positions with forged degrees, where membership rolls have been deliberately overstated in order to foster wondrous personal reputations, etc., have been informed that the administration will not focus its attention on their non-compliance in order to gain support for its war on the ordination of women and those who facilitate it.

Such leadership articulated with profoundly “spiritual” declarations never has served the believers and never will.

I don’t remember ever having had the sense that Adventism was about serving the believers.

To my mind, the denomination took JFK’s most immortal phrase and turned it on its ear, as in:

Hi Jeremy. I actually wrote the article in 2019 and sent it to Bonnie, who said if would be published in the GC Session issue in 2020. Thanks to COVID there was no such session, and so no Session issue of Spectrum. The paper then seemed to get lost, so I was surprised, but pleased, to be informed it was up on the website yesterday. Ted found that he got bruised when he pressed the compliance penalties. I don’t know for sure, but maybe the leaders of the Divisions in Africa and India feared that once this had been done it might be used also against them? So yes, I agree that the actual compliance issue has calmed down. But Ted is still feared.

It is really good to be in contact with you again, Alvin.

@ronald larson I have printed out your article. Have my additional views as soon as I find the space in my timetables - -

A different dynamic shapes the votes of church leaders in the developing world and of delegates from those parts who vote on committees of the General Conference and in General Conference sessions. Traditionally, tribal societies do not behave like liberal democracies: the chief makes the decisions or, if votes are involved, he delivers the votes. I have observed that church leaders in such societies tend to think of themselves as chiefs, or to employ a New Guinean phrase, as “Big Men.”

As far as divisions/missions in the developing world are concerned, clearly, the “Chief” is the GC president and GC officials. Open opposition to voiced opinions by GC/division personnel representatives is rare or unheard of at the local level.

Each layer has a great deal of autonomy, dealing locally with as much as possible, with the higher levels providing consultation and coordination. Nevertheless, since the General Conference represents the whole church, it is frequently affirmed that it is “the highest authority, under God, among Seventh-day Adventists” [Church Manual, revised edition 1990, p.39].
–Ron Lawson
The Seventh-Day Adventist Church as a Global Organization – Ronald L. Lawson Ph.D., Professor Emeritus, Queens College, CUNY

When the interviews were face-to-face and the interviewer was someone they knew from the headquarters of the aggressive General Conference, then this greatly increased the likelihood that the results reported would be those desired by the administration—or, in other words, that pluralistic ignorance would occur.

The paper then seemed to get lost, so I was surprised, but pleased, to be informed it was up on the website yesterday.

thx for this explanation…it makes sense…

I don’t know for sure, but maybe the leaders of the Divisions in Africa and India feared that once this had been done it might be used also against them?

I think Africa and India have perceived this correctly, no question, and i even think Ricardo Graham always had this possible trump card up his sleeve…

the bottom line is that people aren’t stupid…they eventually see the implications of things…i’m not sure why TW thought compliance committees could be used selectively against NAD unions on the issue of WO, if that was the intent…it seems he would have seen how the world church would eventually perceive the full scope of these committees…

But Ted is still feared.

he does seem to carry a bit of a big stick, that’s for sure…he seems to believe in using all levers of power and manipulation at his disposal to keep Adventism Adventist, as he sees it…i don’t think i’ve seen any previous GC president quite so steeped in political maneuverings, but i can’t say i’ve followed things as closely before 2010…still, i tend to think that TW is setting a new template for GC presidents from here on out…

@vandieman IMHO the church is no longer a church, unless the definition of church is “business wolf in dressed up in ecclesiastical sheepskin”. The manipulations (from the outside) are more akin to corporate boardrooms than church boardrooms.

My impression from women pastoring outside NAD is that the idea of compliance has done it’s work. They still feel their jobs are less valued and many women educated as pastors/theology cannot get jobs, cannot get help with education etc. I am thinking of examples in 5 divisions where the compliance threats are still used against women who pastor or want to pastor. This is even more concerning because I have very little information in 5 of the other 13 divisions, so the impact within Adventism is large, even though the impact in NAD, TED, and parts of SPD and EUD may be limited.

My impression from women pastoring outside NAD is that the idea of compliance has done it’s work. They still feel their jobs are less valued and many women educated as pastors/theology cannot get jobs, cannot get help with education etc.

but i wonder if this is really the result of the compliance idea, or if it’s just an endemic fact that these women are up against, namely that women pastors are not welcome in their area…certainly had the San Antonio vote been Yes, there are divisions - many divisions - that would have exercised their No option in their territories…they would have found ways to impede women pastors even without the compliance threat tool, and without the pretense that conformity to a world church vote was important…

Hi Dr Seiler, by all means share your views with me. That will be easier to do if you remember that my name is Lawson, not Larson. Thank you.

My impression from women pastoring outside NAD is that the idea of compliance has done it’s work.

I know of women who once pastored congregational districts, up untll recently in the SSD!. They’ve presently been promoted or relegated to departmental, hospital chaplainly or house/dormitory deanship functions that qualify them for a missionary credential and don’t require miisterial ordination or commissioning. 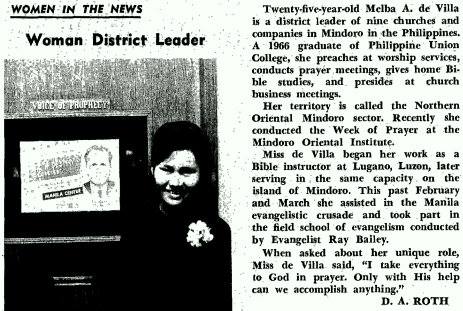 Hello, Joselito. Thanks for the information about women pastors in the Philippines–I am glad to have it. Let me check precisely on your meaning, please: Am i correct in understanding what you posted as saying that in the years before 2015 there were increasing numbers of women in ministry there? But that after the vote that GC Session, they have been being transferred to non-pastoral positions? Do you know when the earlier upturn in women in ministry began there?