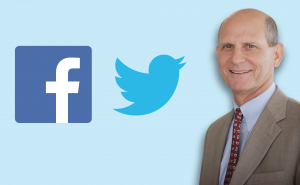 The president of the Seventh-day Adventist Church has finally joined the world of social media. Using @PastorTedWilson on Twitter and /PastorTedWilson on Facebook, Ted N. C. Wilson launched social network accounts on October 1st in order to communicate more effectively and directly with people, he said in the Adventist Review.

A small team of media personnel will help manage Wilson's accounts, but all social media communication will pass through his office, he said.

The decision to implement social media as another means of getting out his presidential agenda of "Revival and Reformation, Mission to the Cities, Comprehensive Health Ministry, and Total Member Involvement," may have been spurred by younger members of the Adventist community.

Wilson: "Another huge thing that we are focusing on and developing rapidly is a strong, strong emphasis on media—social media networks, television, radio of course, Internet, the whole thing." Stuart: "I informed him he isn’t doing a very good job with Twitter..." Wilson: “In the future we are going to—my office will probably have to enter considerably more into the social media aspect. I’m not on Facebook personally, but I recognize that’s where a lot of people are.” Stuart: "Should I tell him Facebook is losing touch?"

As of press time, Elder Wilson's Twitter account was set to "protected" so that only approved followers could see tweets from the account. However, sixteen followers had already been approved.

The Adventist Church already has an official Twitter account, @adventistchurch, handled by the General Conference communication department. The account has 50.8K followers. Wilson's new accounts will allow him to further manage the messaging that goes out of the World Church headquarters.

Other religious leaders on Twitter include Pope Francis, whose @Pontifex accounts in nine languages have over 25M followers, the Dalai Lama with 11.9M followers, and Thomas S. Monson, President of The Church of Jesus Christ of Latter-day Saints, who has 116K followers.

EDIT: As of noon Eastern Time, @PastorTedWilson was no longer a protected account, and had over 850 followers. Elder Wilson's first tweet:

This is a companion discussion topic for the original entry at http://spectrummagazine.org/node/7100
owusugyamficliff October 1, 2015, 9:31am #2

At least it will serve him and the church many goodwill.

obvious only in a telling mode, not a liisteniing mode., If he wants to know the health of the church he needs at least to take its pluse. The church pretty well knows his already… Far too much Alexander Haig. Tom Z

One of the foundational strategic principles for using Twitter and other social media is to be in the room for the conversation that is already occurring.

How will he do this?

Will his handlers just be sending out one-way messages, or will it truly be a conversation, the beauty and value of social media? This remains to be seen.

Will his handlers just be sending out one-way messages, or will it truly be a conversation, the beauty and value of social media? This remains to be seen.

You mean like Spectrum where one post is all you get? How is that a conversation? Please enough with the double standard bulloney.

I really hope the Ted Wilson sees this as an opportunity for a two-way conversation, however i feel, it may turn in to a platform for him to blast social media with his one sided agenda, which would be unfortunate.

Also again Spectrum, i would like to take this moment, to state we do not have a conversation here, rather a broadcast platform, some of other members have asked me to join the conversion in the “back room”, however i have not asked for access to this, nor will i, we should not be ashamed of open dialog, nor will i support this, instead i will remind spectrum of this problem, with each broadcast message i share. i would encourage others not to allow spectrum to push our conversation to some hidden back room, where our voices will not be seen by others visiting the site, ideas and perspectives are worth sharing and not suppressing… we must be open and transparent. and the conversations we have regarding a story must be linked to the story, so everyone can have proper context.

As most here know…the majority of posters here are hostile to the GC,
Relatively, very few people get on this site, Adventist Today or Revived by His word.

The only way to really catch the pulse of the larger group is to have churches all over the world have surveys…
Maybe once a quarter like as often as communion.

I won’t hold my breath waiting.

Interesting that the other church I go to …a NON denom recently had a survey to fill out on the worship service and sermon.

The two camps try to keep appearance but the marriage sinking fast.

people can say what they want, but ted is a good man with a good heart…unfortunately it does appear that he’s in error on wo, but you know, you can’t have everything…what we have with ted as president is decisiveness, clarity and focus, which i really think are must haves in a leader…he appears to have respect for the bible and egw, and this is a good thing…it means we’ll come out right in the end, despite a few wobbles along the way…i hope he’s president for a third term after this one…

I was amused to see this announcement as this is likely to be uncomfortable for him. I actually sincerely hope it is. Anyone who takes this on as a visible leader needs to understand the conversations and be willing to learn. He can do neither. He may be an earnest guy, but he does not display the character of a strong leader nor embraces diversity.

My prayer is that open Christians take him on directly and overtly, demonstrate his arrogance, and put him in his place theologically and principle-wise. I’m speaking to some about creating a campaign to counteract any intention he has of peddling his wares online. I see one has started: https://twitter.com/SoRealTedWilson

This will be fun!