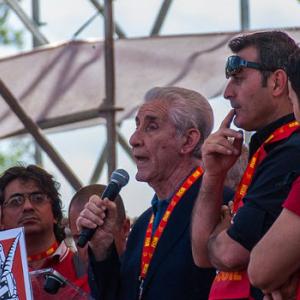 This year the Christian World commemorates the five-hundredth anniversary of the Protestant Reformation, an event that tradition tells us began on October 31, 1517 when Martin Luther posted his ninety-five theses on the door of the Castle Church in Wittenberg, Germany. At the center of this movement stands Luther’s rediscovery of the Gospel message: human beings do not earn their salvation by doing good works; rather, God freely offers salvation to all who believe. In last month’s column, I considered some protestant theological tenets (e.g. the “Sola Gratia” principle) which shifted the accent from “Creation” to “Salvation”. This contributed to the emergence and reinforcement of modern “Anthropocentrism” as a positive but also an ambivalent sociological event—one that deeply conditions today’s societies and churches and urgently demands a new theological and cultural reformulation.

A fourth main characteristic of the Reformation is represented by its radical defense of the “Sola Fide” principle. According to this principle, also known as “Justification by Faith alone”, God’s pardon for guilty sinners is granted to and received through faith alone, excluding all “Works”. All mankind, it is asserted, is fallen and sinful, under the curse of God, and incapable of saving itself from God’s wrath. But God, on the basis of the life, death, and resurrection of his Son, Jesus Christ alone, grants sinners judicial pardon, or justification, which is received solely through faith. Faith is seen as passive, merely receiving Christ, his righteousness and all his benefits. Christ's righteousness, according to the "sola fide" principle, is imputed (or attributed) by God to the believing sinner (as opposed to infused or imparted). Thus the divine verdict and pardon of the believing sinner is based not upon anything in the sinner, but upon Jesus Christ and his righteousness alone, through faith alone. Historic Protestantism (both Lutheran and Reformed) has held to “sola-fide justification” especially in opposition to Roman Catholicism, but also in opposition to significant aspects of Eastern Orthodoxy. Protestants exclude all human works from the legal verdict of justification. In the General Council of Trent (1545-1563) the Catholic Church stated in canon XIV on justification that: "If any one saith, that man is truly absolved from his sins and justified, because that he assuredly believed himself absolved and justified; or, that no one is truly justified but he who believes himself justified; and that, by this faith alone, absolution and justification are effected; let him be anathema (excommunicated)." Thus, "faith alone" is foundational to Protestantism, and distinguishes it from other Christian denominations. According to Martin Luther, justification by faith alone is the article on which the church stands or falls. By upholding this principle Protestantism corrected two religious anomalies. First, it purified a medieval religion encumbered with the obsession of pleasing God, a mechanism that, instead of approaching, ended up drawing people away from God. Second, it facilitated the emergence of a new religion whose strength resided in immediacy between God and the believer, under cover of a new sense of trust and surrender.

But, beyond the undoubted religious benefits which the “Sola Fide” principle brought, and beyond a more inclusive understanding that churches and believers might have of it, this principle also provoked an important “separation” between “Church” and “Society,” thus introducing a huge cultural revolution. Until then Church and Society, even if differentiated, were not really divided. They both were based on a common ground represented by the great principles and values of the Christian tradition. The medieval society was a “Christian society” and medieval Christianity was a “Socio-political Religion”. Since Protestantism aimed to purify religion of all its non-religious elements it first had to separate religion from the other ordinary dimensions of life. And, because in ordinary life “faith alone” is impossible, the central experience of religion (“Sola Fide”) had to emigrate from the “City” to the “Church”, and from the “Church” to the “Heart”. In this sense the Reformers’ “Sola Fide” principle functions as a strong secularizing category. It leaves the society free from a “Faith” which until then had been pervasive but which, in virtue of its new radical definition (“Faith without works”), had become useless – or couldn’t have survived in the “City”. However, this “radicalization” (spiritualiation, interiorization) of Faith expressed in “Sola Fide” was only one side of the process taking place. The other side was emergence of a strong “Voluntarism”, which occurred not in the “Church” but in the “City”.

1. Benefits and limits of Western Voluntarism

Pragmatism, organization and efficiency are probably the more distinctive traits of Western societies. But, before that, they were born as societies which deliberately chose to privilege man’s will above man’s reason. In modernity even reason is in fact conditioned by will. Modern reason is not contemplative, as it was in medieval times, but rather performative. This new cultural fact had already emerged distinctively with William of Ockham and nominalism in the 15th century, but really affirmed itself only afterwards with the birth of modern philosophy, modern science and technology. For this reason Western societies are not secondarily pragmatic. They are so structurally because they chose “the power of Will” as a founding category. In this sense they are thoroughly voluntaristic societies.

And here the destiny of modern societies and protestantism crossed each another. Protestantism, while condemning voluntarism on a religious level, paradoxically endorsed it on a civic level. The legitimate theological-medieval concern with works emigrated from the “Faith experience”, which has to be “without works”, to the civic dimension of life which became very work-oriented. We might say that this is finally Max Weber’s thesis of radical vocation to work and discipline of protestantism as incarnated in voluntaristic ethics. Religious voluntarism, criticized by the Reformers as being the heart and starting point of “justification by works”, was just expelled from the religious experience and relocated in the believer's secular life, where it was not only accepted but even praised. The protestant believer in the “City” had necessarily become a person characterized by his/her objective – efficient and disciplined work.

Cultural voluntarism is not necessarily negative. It has pushed societies to take control of the main processes involved in maintaining life, health, eating, working, aging and even dying. Disease, unemployment, poverty and illiteracy no longer represent a destiny but can be reversed with the implementation of a strong and well-oriented “Will”. This way of reading and approaching reality has been tremendously effective because it has given our lives and communities discipline, order and results. Even religion, Adventism included, has been modeled this way. However, the collateral effect of this has been the incubation of a misleading illusion. It is represented by obsession with the limitless power of the will and particularly by reinforcement of the blind conviction that our problems can only be solved with a stubborn will and compulsive work. Our way of reading and approaching life and reality has thus become unidirectional and mechanistic. Voluntarism tends to overlook other important aspects of life’s situations. It ignores the existence of complex and paradoxical events that get exacerbated with a greater dose of will and action. The more characteristic events and dimensions in human life are not approachable with strong “interventionist strategies”, as is typical with voluntarism, but rather with “auscultative strategies” – i.e. strategies which precede and balance will with listening, interaction and flexibility.

2. Is it possible to go beyond a “Voluntaristic” reading of the Bible?

The strong, self-correcting mechanisms present in western society have also pushed it to be partially aware of the ambivalence of cultural voluntarism and to find some alternatives to it. So we have today various non-voluntaristic approaches to reality in different disciplines, which work with multi-directional, holistic strategies. They try to remind us that men and women are not unidirectional but paradoxical beings, by essence (E. Fromm). For this reason we cannot be treated as mechanical “productive” beings or mechanical “reliable” believers. By nature we generate a positive tension between our different dimensions that no monolithic religious, ethical or economic system can overlook, and even less repress with one-dimensional rules (Marcuse).

It is in this context that great value can be found in the legacy of Stefano Rodota, who passed away this year, the 500th anniversary of the Reformation. He was a distinguished Italian jurist, university professor, thoughtful writer, passionate and prestigious congressman and strict guarantor of the codes and rules of a healthy democracy. His long civic activism has always been marked by the promotion of rights and protection of the weakest. And this curious mix of a high respect for constitutional governance but, at the same time, a categorical refusal to totally submit and chain human life to rules is what we learned in a precious dialog we had with him at Adventist Theological Seminary of “Villa Aurora”, May 6, 2009 – in the presentation of his book “Life and Rules. Between Law and no-Law”. Certainly that book represents a thoughtful reflection on the value and limits of cultural voluntarism as expressed in our current codes of Law.

Can we Adventists, starting from the Bible, overcome – or at least limit – the strong Voluntarism we derived from the Bible and subsequently extended to theology, administration, pedagogy, and ethics? We should try for at least two reasons. First, an exclusive and hard voluntarism is not mandatory – theologically or culturally. Valid alternatives exist. Second, and the main reason, is the Bible itself. The various categories and metaphors the Bible uses to describe the nature and vocation of human beings does not always concern will and action. The believer is compared with a “living tree” (Psalm 1), a "trusting sheep" (Matthew 25), a “flourishing palm” (Psalm 92), a “vulnerable chick” (psalm 61) or an inefficient but beautiful fleur-de-lys. All those metaphors are, in various degrees, anti-voluntaristic but not anti-human. Protestantism has, is, and should be a living witness to a refreshing and balanced anthropology which is able to maintain in tension the various complex elements of a “heterogeneous” and “poly-centric” Bible.

Hanz Gutierrez is a Peruvian theologian, philosopher, and physician. Currently, he is Chair of the Systematic Theology Department at the Italian Adventist Theological Faculty of “Villa Aurora” and director of the CECSUR (Cultural Center for Human and Religious Sciences) in Florence, Italy.

Previous Spectrum columns by Hanz Gutierrez can be found at: https://spectrummagazine.org/authors/hanz-gutierrez

**_If you respond to this article, please:_** **_Make sure your comments are germane to the topic; be concise in your reply; demonstrate respect for people and ideas whether you agree or disagree with them; and limit yourself to one comment per article, unless the author of the article directly engages you in further conversation. Comments that meet these criteria are welcome on the Spectrum Website. Comments that fail to meet these criteria will be removed._**
This is a companion discussion topic for the original entry at http://spectrummagazine.org/node/8235
tjzwemer (Thomas J Zwemer) September 14, 2017, 6:10pm #2

Why is it that volunteerism is is a burden for the layity only?

Protestantism has, is, and should be a living witness to a refreshing and balanced anthropology which is able to maintain in tension the various complex elements of a “heterogeneous” and “poly-centric” Bible.

Is it possible that Adventism is besieged with intellectual volunteerism?