For this week, the Adult Bible Study Guide defines several characteristics of Jesus: creator, promised savior in Genesis, Davidic messiah, and son of God. It repeats some of the points made last week on Seventh-day Adventist Christology. For a quick summary, one might just read the fundamental belief on God the Son.

Once again, a biblical discussion is too-quickly quashed via a reference to Ellen White.

i don’t think egw’s use of the assumption that Paul wrote Hebrews means she’s saying that Paul wrote Hebrews…this is similar to her use of Ussher’s 6,000 yr chronological age for the earth, or her use of the 40 room figure for Paradise Valley Sanitarium, where her tendency was to tether her inspiration to the most authoritative, objective information available…obviously she was using her KJV title, which names Paul as the author of Hebrews…

as for Cortez’ use of a Pauline authorship, why not…while there are convincing counter-narratives, no-one can prove Hebrews wasn’t written by Paul…this seems to be a situation where people can legitimately pick what they want, at least for now…Cortez is likely banking on the fact that there will be less fall-out with scholars who know no-one knows who wrote Hebrews than with conservatives who strongly believe in a literalistic egw approach…

in which case maybe it’s Goldstein, or whoever is editing the SS quarterly now, who’s making that calculation…

A) I’m inclined to agree with @vandieman, here, when he says that EGW’s “tendency was to tether her inspiration to the most authoritative, objective information available.”

I’m not making a statement about her inspiration. I’m merely using Jeremy’s statement to make the point: I’m certain EGW often spoke about matters by repeating statements which represented the common consensus of her day. Over time, those statements have calcified into our native myth of her authority.

What follows, then, is the common, even if unspoken, SDA position: EGW validates — or invalidates — human knowledge, including biblical knowledge; i.e., she is The Arbiter.

Hence, this stylish piece of apparel… 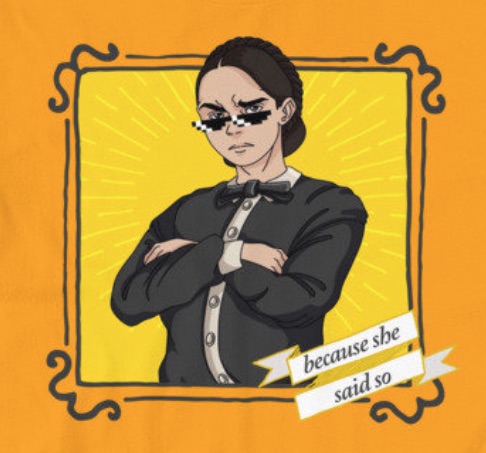 … which, it bears repeating, readers can purchase in a rich array of colors and sizes, right here.

C’mon: You know you want one.

B) I have the same concerns you expressed, re: the claim of Pauline authorship. I certainly don’t believe EGW has any authority on this matter. Also, until just now, I was not aware of the materials you bring to bear, here; e.g., the ATS video.

Because of this concern, I wrote to Dr. Cortez on Christmas evening; the very first day of the current quarterly on Hebrews.

He kindly wrote back the next day, which surprised me, and I was glad for it.

Because it was not a personal letter, but a professorial one, I trust Dr. Cortez won’t mind me reproducing its contents here, in the interest of greater knowledge and discussion on the topic:

Greetings to you and many blessings.

I am happy to know that you are excited about studying Hebrews. The question you ask about the authorship of Hebrews is important and interesting.

First, we need to recognize that Hebrews does not identify who the author is, even though it is clear that the audience knew who the author was. For some reason unknown to us, the author chose not to identify himself. Whatever we say about this topic, then, must remain tentative

Most of contemporary scholarship has rejected the idea that Paul was the author. At the beginning of my career as a student of Hebrews, I also doubted that the author was Paul. In the last 4 years, however, my views have changed. There are probably 5 main factors that have led to this view.

In short, I think it is easier to explain that Paul wrote Hebrews and that is why it always appears as part of the Pauline letters than to say that Hebrews was written by an unknown author and then included in the Pauline collection so that it became one of the best attested letters of Paul.

The following is what the International Bible Society’s study guide on Hebrews says about the author of the book:

The writer of this letter does not identify himself, but he was obviously well known to the original recipients. Though for some 1,200 years (from c. a.d. 400 to 1600) the book was commonly called “The Epistle of Paul to the Hebrews,” there was no agreement in the earliest centuries regarding its authorship. Since the Reformation it has been widely recognized that Paul could not have been the writer. There is no disharmony between the teaching of Hebrews and that of Paul’s letters, but the specific emphases and writing styles are markedly different. Contrary to Paul’s usual practice, the author of Hebrews nowhere identifies himself in the letter—except to indicate that he was a man (see note on 11:32). Moreover, the statement “This salvation, which was first announced by the Lord, was confirmed to us by those who heard him” (2:3), indicates that the author had neither been with Jesus during his earthly ministry nor received special revelation directly from the risen Lord, as had Paul (Gal 1:11–12).

The earliest suggestion of authorship is found in Tertullian’s De Pudicitia, 20 (c. 200), in which he quotes from “an epistle to the Hebrews under the name of Barnabas.” From the letter itself it is clear that the writer must have had authority in the apostolic church and was an intellectual Hebrew Christian well versed in the OT. Barnabas meets these requirements. He was a Jew of the priestly tribe of Levi (Ac 4:36) who became a close friend of Paul after the latter’s conversion. Under the guidance of the Holy Spirit, the church at Antioch commissioned Barnabas and Paul for the work of evangelism and sent them off on the first missionary journey (Ac 13:1–4).

The other leading candidate for authorship is Apollos, whose name was first suggested by Martin Luther and who is favored by many interpreters today. Apollos, an Alexandrian by birth, was also a Jewish Christian with notable intellectual and oratorical abilities. Luke tells us that “he was a learned man, with a thorough knowledge of the Scriptures” (Ac 18:24). We also know that Apollos was associated with Paul in the early years of the church in Corinth (1Co 1:12; 3:4,6,22).

One thing is evident: The author was a master of the Greek language of his day, and he was thoroughly acquainted with the pre-Christian Greek translation of the OT (the Septuagint), which he regularly quotes.

My areas of relative expertise are i) race and ii) hip-hop, not near Eastern ancient manuscripts. Hopefully, though, I’ll be able to wrangle up a response to this good scholar in a reasonable amount of time, after some study.

And if not, there’s always this t-shirt.

I’m certain EGW often spoke about matters by repeating statements which represented the common consensus of her day. Over time, those statements have calcified into our native myth of her authority.

This was what I have found out in my exhaustive research on EGW’s literary indebtedness. I like the way you’ve expressed it.