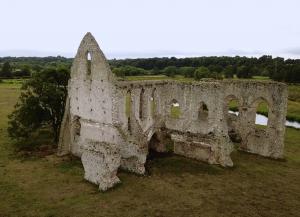 The Reformation was clearly centered around religious concepts and ideas and as Christians we value the principles that grew out of it: the authority of scripture, the Bible in a language we can understand, and the whole concept close to Luther’s heart that “The just can live by faith” or, as the Good News Bible puts it: “For the gospel reveals how God puts people right with Himself: it is through faith from beginning to end.” (Rom 1:17)

Yet it’s easy to think that the Reformation was just about religion, with people desperate to defend ideas of truth against error. For some however, the Reformation came about not because they thought something was religiously true, but because it was convenient and for that story we need to travel to England.

Only two years after Martin Luther published his 95 theses, Henry VIII started writing a counter-attack to Luther’s complaints about indulgences, which he published in 1521. The book was titled The Assertion of the Seven Sacraments and was a defense of the sacraments that all Catholics engaged in: Baptism, Confirmation, the Eucharist, Penance, Anointing the Sick, Holy Orders, and Matrimony. It was a European best-seller, running through 20 editions. It is difficult to read Henry’s mind, but he probably wrote it because he wanted a fancy title from the Pope (like the French and Spanish kings) and it worked. Leo X gave him the title, “Fidei Defensor,” defender of the faith, a title which all British kings have maintained to this day. Those initials are even engraved on the £1 coin. Yet, less than 10 years later, some of the very things that the book had defended; the sacredness of marriage, and the supremacy of the pope, had been overturned by Henry. Why?

Henry had married his brother’s widow, Catherine of Aragon, in 1509, but their marriage had only produced one girl, Mary Tudor, despite five other pregnancies that failed, or the babies had died shortly after birth. Henry was in a difficult situation. The Tudor dynasty was still very new and without a male heir this might cause all the hard-work of his father, Henry VII, to fail. Henry needed a son, but Catherine was approaching middle age so her chances of bearing children were reducing and the court physicians told him so. At the same time, one of Catherine’s ladies in waiting caught Henry’s eye. She was young, vivacious, generally considered to be beautiful and she soon found herself at the center of court attention. Most importantly, she found herself under the eye of Henry who couldn’t get enough of her. Henry was a man who got what he wanted and he pursued Anne, who played a game of hard to get. The fly in the ointment was that he was still married to Catherine, who was less than pleased with the King’s actions.

The other issue was that Catherine’s nephew was Charles V, ruler of the Holy Roman Empire and Clement needed Charles on his side against Luther. As the Pope wouldn’t grant Henry his annulment, Henry then decided to turn to his own Parliament in 1529, to see if they could help. Obligingly, they did, firstly by stopping individuals convicted of crimes from appealing to powers outside the realm of England, notably the Pope. They then stopped Annates, essentially church taxes, from leaving the country and going to Rome, a common complaint of both Wycliffe and Hus some decades earlier. By 1530, Henry had begun to believe that England wasn’t under papal authority, but under his own.1 A number of laws were passed in the next six years that made it clear that Henry was in charge. The most important was the Act of Supremacy which stated that Henry was “The Only Head of the Church in England on Earth.” Now King Henry was for all intents and purposes, Pope in England. In May 1533, he married Anne Boleyn after Archbishop Cranmer conveniently declared the marriage to Catherine to be void.

Henry got what he wanted; a wife and complete power over his own kingdom. He would have been happy with just that, but his chief minister, Thomas Cromwell, was much more Protestant minded. He began to engineer changes to that end, removing the monasteries, shrines, the veneration of saints and images. Henry went along with this, mostly because it suited his purposes. The dissolution of the monasteries meant that he received a lot of money from selling them off and the shrines and monasteries were focal points for faithful Catholics to build resentment against Henry’s new policies.

Newark, a 12th century Augustinian priory near Pyrford in rural Surry, is just one example of previously extensive lands and wealth, dissolved by the king, the prior pensioned off, valuables sent to the Tower of London, and the lands given to the Master of the King’s Horse.

As Henry grew older, he began to veer back towards a conservative Catholic faith, albeit without giving up his authority over the Church of England. Some of that was caused by a large Catholic rebellion in the north of England, some of it no doubt caused by Pope Paul III finally excommunicating him which meant that any European power could invade England with papal blessing.

After his death, his son, Edward VI swung back into full Protestant mode until his life was cut short by tuberculosis. Henry’s first daughter, Mary, or Bloody Mary as she was known for executing so many Protestants, then turned the country back again towards full and proper Catholicism until her life was cut short, leaving Elizabeth I to ascend the throne.

Elizabeth, looking back over the religious mess of the previous 20 years, decided that England was religiously better off if everything was vague enough to annoy everyone. She created a Protestant nation, but one that often looked Catholic if you wanted it. It practiced like a Protestant nation, but enough of the church service sounded Catholic if you wanted it. It was a magnificent piece of religious engineering that meant that the flip-flopping between Catholic and Protestant extremes was over.

It may have been a political compromise, but the Anglican Communion eventually became a great force for good in the world and as reformation continued through the years, Methodists, the Salvation Army, and other faith groups grew from its ranks, based on religious and social issues. A church which, you could say, started on the wrong footing 500 years ago, has nevertheless been part of God’s mission.

The reality is, we are all human, we all make mistakes. Luther, Calvin, and the other great reformers were not perfect. We admire their force for good, but sometimes forget their big errors such as the persecution of the Anabaptists. Henry certainly established the church for the wrong reasons, but despite that, good came out of it.

As expressed in the Reformation Journey video #3, we all, from time to time, can find ourselves in tricky situations and perhaps need to ask questions of ourselves. I have a church where I feel I belong. I consider it my spiritual home, but why am I a member here? Why, as part of reformation history, do I choose to be a Seventh-day Adventist?

Perhaps the emphasis is to continue the reformation trend, the belief in the Bible, the focus on Mission, the desire for service. Perhaps it is because it grew out of the reformation heritage. While in some ways, like the Anglican Church, it can be a very broad communion, with people from diverse cultures holding a range of viewpoints, my principle reason for my spiritual home being here, is a strong dependence on the Word of God, the assurance that it gives me for the present, and the hope it gives me for the future. That is why, like Luther, I can say, “Here I stand.”

Still to come: - Keep Asking the Questions (About faith and martyrdom in Oxford) - Understanding Luther (A visit to Wittenberg brings to light the simple core of Luther’s belief) - Here I stand! (A combination of conscience, Scripture, and reason make for a life-changing choice) - Found in Translation (The joy of Scripture through a multitude of Bible translations)

This story was written by Robin Anthony and originally published on the Trans-European Division website.

Very interesting article. What can we learn from Luther? One who sees part of the gospel may not see all of it. There were no clear winners and losers in the Reformation. There were many players besides Lutherans and Catholics. There were Anabaptists and Calvinists. Luther is at best a flawed hero.
Luther’s writings were not the cause of the revolt, but they certainly appealed to the peasants. When the revolts began to turn violent, Luther opposed them. He claimed the peasants had misunderstood what he was saying, and while he felt their cause was just, he could not support their insurrection and breaking of the peace. Responding to the peasants he wrote, Against the Murderous, Thieving Hoards of Peasants (Wider die Mordischen und Reubischen Rotten der Bawren). In this tract, Luther instructed the German Nobility to strike down the peasants as one would kill a mad dog. This was just what the Lutheran and Catholic aristocracy wanted to hear, and it is precisely what they did. The revolt was put down. When the smoke cleared over 100,000 peasants were dead.
For some it may be easy with our 21st century, post-American Revolution eyes to judge Luther for his lack of democratic values in his actions during the Peasant’s Rebellion. Luther was a product of Late Medieval feudal society. his decision to call for severity with the Peasants cost him the support of many and not just the peasants, who, in time, identified with the more egalitarian Anabaptist movement. He sided with the powerful over the powerless. Because Luther and his parents were neither peasants nor rural, it is likely that he didn’t fully understand their plight. Some would say that as a result Lutheranism henceforth became a religion for the upper classes.

Hi everybody,
I love this web series. There is another great one done by Adam Ramdin (Youth Director for the North England Conference) called “Lineage”. Here is the link: http://www.lineagejourney.com/

the Bible in a language we can understand,

It occurs to me that many of the peculiar doctrines of our church were based on a translation that we cannot adequately understand, namely, the King James Version. For instance, our self identification as “the remnant church” sprang from a misunderstanding of the Greek source. We misunderstand the “seventh day” to mean the seventh day of the calendar week instead of simply the seventh day of whatever sequence is being discussed. (When Jesus said He would be raised on the “third day”, He didn’t mean the third day of the week.) In their introduction to their version, the KJV translators warned us not to depend solely on their translation, yet it seems that all of our proof texts are KJV only.

Understanding the way Israel reckoned time (the moon was the timepiece for the beginning of the month…that’s when the counting of the days began), puts the seventh day in a whole different place. But, it is not beneficial (for obvious reasons) for the SDA church to study, or admit, that this was the way the nation of Israel kept time.