In 1933, people in Jefferson County Alabama killed Elizabeth Lawrence, a black woman, because she scolded white children who threw stones at her as she walked home from her job as a high school teacher. This story, occurring in my county, was a tiny piece of the quilt of societal injustice that confronted me last week when I visited Montgomery to see The National Memorial for Peace and Justice (The National Lynching Memorial) and The Legacy Museum: From Enslavement to Mass Incarceration.

Bryan Stephenson, public interest lawyer and author of Just Mercy, had the vision for creating a space of remembrance. It is part of his lifetime commitment to the task of fixing our broken justice system. Part of my life identity is that I constantly search for the underlying narrative that influences group actions. Like the invisible rudder guides a ship, my visit reminded me that “White People are More Valuable” was the story that informed the actions of U.S. society for over half of its history.

At the museum, a scratchy rendering of “Dixie” brought a sense of unease, as it hummed in one section of the museum, a space where slaves were once sold. I learned that twelve million Africans were kidnapped and enslaved before Trans Atlantic slave trade was banned in 1808. Still, domestic slave trade continued in the country for decades. In fact, in 1833, Alabama prohibited free black people from living in the state. I saw the penmanship of John Winter, an Alabamian, who in 1854 created a sort of catalogue to market his 117-slave estate. After an introduction describing his philosophy for managing his commodity, Winter’s directory describes each person:

Cornelia: About 10, a good girl, but not very smart.

Alfred Henderson: About 22 years of age, good fair hand on the road and plantation, no faults, and of no remarkable merit.

A collage of vintage signs overwhelms one part of the museum.

No Negroes allowed after sundown.

Imperial Laundry: We wash for white people only.

A timeline shows Supreme Court rulings in the context of rights for African American people. I noticed a jolting, sporadic application of “justice for all” and “innocent until proven guilty.” Colorful gallon glass jars were stacked high and wide, like a well-stocked autumn pantry. These stood in the middle of the museum, showing soil from known lynching sites — places I have been. The museum is just a mile from the National Lynching Memorial, which is sprawled on a fenced hill. A winding path, like an uncoiled rope, pulls the visitor up a knoll toward an edifice designed to remember over 4,300 documented lynchings. The quiet sound of far away rippling water gives dignity and solemnity to the open-sided structure that features 805 metal coffin-like blocks, suspended evenly from the roof. Each represents a county where a lynching occurred and lists the names and dates of the people who were murdered.

On initial entrance to the memorial, the massive hanging boxes skim the ground. Then, as I meandered around the periphery, the floor sloped gradually so that the casket-like blocks, hanging in uniform lengths from the roof, became suspended higher and higher above the ground. Once I walked around the third corner, the dozens of heavy metal rectangles hung overhead, out of sight. When I got to the fourth side of the structure, a wall of water confronted me and I felt cloistered far below ground, and I was relieved to not be overtly confronted by the hanging relics of a painful past.

The smooth sheet of water was like a blank slate, framing the last side of the memorial and representing unnamed people who were murdered, lynched without documentation. Yet, the blocks were still there, dangling from the roof, just ominously far above now, and out of sight. Just like the lynching legacy. It is not in plain view, but it hangs over us — large and dangerous.

I thought of Faulkner’s words: “The past is never dead. It is not even past.” I thought of the Seventh-day Adventist story in the context of race. In the South, I think, an ossified fear of “becoming political” put the Church’s light under a bushel fifty years ago. Recently, I heard Oakwood University President, Leslie Pollard, speak of “remnant as responsibility, not status.” He said that Adventist theology has been overly influenced by white people seeking to evangelize without the stance of wanting to listen. No one asked what it felt like to be prohibited from drinking in some water fountains. “Remnant as a responsibility, not a status.”

What unseen narrative is informing church action now? What are the unsaid questions? Is there room for curiosity? Or, do we know it all, now? Is our underlying narrative accurate? Does it describe a responsibility or a status?

P.S. Lester Holt from NBC visited the memorial recently, too.

Carmen Lau is a board member of Adventist Forum, the organization that publishes Spectrum. She lives and writes in Birmingham, Alabama.

Images courtesy of The National Memorial for Peace and Justice and The Legacy Museum: From Enslavement to Mass Incarceration Facebook pages.

I have visited the hallowed grounds of The National Memorial for Peace and Justice. Deeply sobering. Thank you for sharing your experience in the additional context of the church. Much to ponder here, including words that you have not spoken. 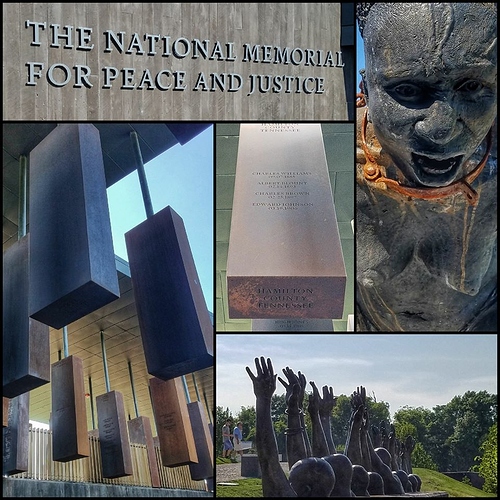 He said that Adventist theology has been overly influenced by white people seeking to evangelize without the stance of wanting to listen. No one asked what it felt like to be prohibited from drinking in some water fountains. “Remnant as a responsibility, not a status.

If someone is telling me truly ‘good news’, why would I want to interrupt them to have my own complaints heard ?

So, the biggest problem with Adventist theology most probably is that it has been overly influenced by white people seeking to evangelize without the stance of wanting to listen to Heaven and Their Messengers . . . ALL of them.

But, even today the SDA seminary enjoys listening to those who would debate and dilute such truth, and who would like for the rest of the world to not enjoy the fullest understanding of that great news.

“And he said unto me, It is done. I am Alpha and Omega, the beginning and the end. I will give unto him that is athirst of the fountain of the water of life freely.”

. . . so, yes, as a ‘pink’ man and soon to be former SDA, again, I have known what it is like to not be allowed by unbelieving SDA leaders to drink, specifically, from ‘the fountain of the water of life, freely.’

I have known what it is like to not be allowed by unbelieving SDA leaders to drink, specifically, from ‘the fountain of the water of life, freely.’

But woe unto you, scribes and Pharisees, hypocrites! for ye shut up the kingdom of heaven against men: for ye neither go in yourselves, neither suffer ye them that are entering to go in.

He who believes in Me, as the Scripture said, 'From his innermost being will flow rivers of living water.’